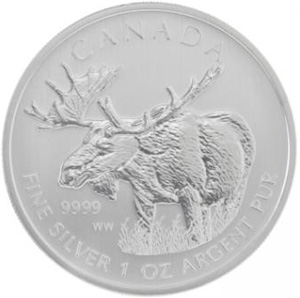 The reverse design of the latest release features the depiction of a majestic moose by Senior Mint Engraver William Woodruff. The moose is Canada’s largest land mammal and rules the forests from Newfoundland to the Pacific Coast. Inscriptions include “Canada”, “Fine Silver 1 oz Argent Pur”, and “9999”. The obverse design of the coin features the effigy of Queen Elizabeth II designed by portrait artist Susanna Blunt.

The 99.99% pure one ounce silver bullion coins carry a face value of $5. The Royal Canadian Mint’s Ottawa facility will produce up to one million “Moose” silver bullion coins, which will soon be available through the Mint’s network of bullion distributors.

Ian E. Bennett, President and CEO of the Royal Canadian Mint said, “The Mint’s Silver Wildlife bullion coin series has been a perennial success with investors and collectors world-wide and we are proud that the market’s enthusiastic response to these coins proves once more that the Royal Canadian Mint’s products are at the head of their class.”