France has won the Coin of the Year Award (COTY) for 2014. The award, sponsored by World Coin News – goes to the Monnaie de Paris’ Yves Klein 10-euro silver coin with a distinctive blue hand of the artist against a silver background. The coin triumphed as an international judging panel submitted their choices which were tabulated before the deadline of December 8th. 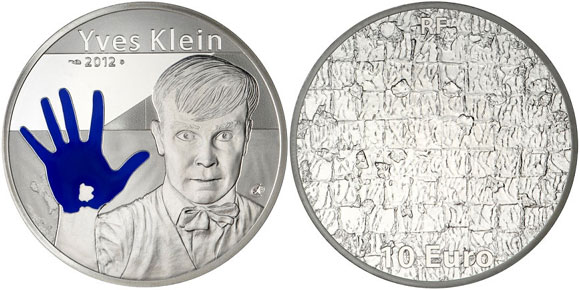 The Klein 10-euro coin had also been chosen as the Most Artistic Coin among ten category winners that were selected to compete for the Coin of the Year. France and the Monnaie de Paris had two category winners competing for the top award. Winner of the best Silver Coin category was a silver 10-euro coin, (KM-2079) that featured a French Ocean Liner design, “Le France.”

Australia and the Royal Australian Mint – also had two category winners in the final round. Its winner was in the Best Crown category, for coins approximately silver dollar size, (36 mm or larger) was a silver $5 coin (KM-1853) showing the Southern Cross in a blue sky on the reverse. Australia’s second category winner was for Best Circulating Coin. The aluminum-bronze $1 coin (KM-1738) proclaimed the International Year of the Farmer.

The remaining category winners were divided among six nations.

Greece and the Greek State Mint topped voting for the Most Historically Significant Coin with a silver 10-euro coin called Greek Culture – featuring a detailed profile of Socrates. (KM-248)

Best Contemporary Event Coin, which honors historically important events in the past 99 years, was awarded to Great Britain and the Royal Mint’s silver 10-pound coin for the London Olympic Games. (KM-1227)

The best Bi-Metallic Coin acknowledged in the awards was issued from Finland. It is the Helsinki – World Design Capital 50 euro where the outer ring is silver and the inner ring is gold. (KM-180)

Italy along with the Istituto Poligrafico e Zecca dello Stato claimed the Best Gold Coin of 20 Euro with its Fauna in Art – Middle Ages. (KM-352)

The Award in the Most Inspirational Coin Category went to the small channel island of Alderney for a copper-nickel 5-pound crown coin issued in honor of Remembrance Day, November 11th. (KM-219)

The international panel of judges is comprised of mint masters, artists and numismatists. The COTY winner, as well as all 10 category winners will be awarded a trophy and certificate at a special ceremony during the World Money Fair in Berlin on the 8th February 2014.