As we discussed last week, counterfeits of classic U.S. coins have been pouring in from overseas—particularly from China—like a plague of locusts. Many are so crudely made, even a poor student of numismatics can spot them. Others are more convincing, and can only be picked out by a keen eye. A few are of such high quality they can fool even most experts.

It takes three dies to produce a coin: the anvil die, on which the planchet rests; the hammer die, which strikes downward on the planchet; and the collar die, which surrounds the planchet and prevents the compressed metal from escaping out the sides. The collar die can also impart a design—for example, lettering—into the edge of the coin. To produce a high-quality counterfeit, each of these dies must be perfect, and they must be used together in the correct way.

As we also mentioned last week, counterfeiters have struggled for centuries with the intricacies of making correct coinage dies. High-quality “tool” steel is necessary to produce a working die. Tool steel is a carbon or alloy steel that is extremely hard, resists warping and scratching, and holds an edge at high temperatures—qualities that make it suitable for shaping other materials (as its name suggests). The quality of the steel must be up to the work it is expected to do, and higher quality equals greater expense. Moreover, there are subtleties to the type of strike the various grades of steel will produce. A medieval hammer die made of iron that has struck 15,000 blanks will impart different characteristics than its work-hardened steel counterpart from the U.S. Mint.

Early counterfeiters, after obtaining tool steel, would cut dies by hand; later, they would fabricate dies by spark erosion, impact methods, one-to-one transfer methods, and casting. Each of these techniques has its problems, which are as follows:

Problems With Dies Made by One-to-One Die Transfer

Problems with Dies Made by Spark Erosion

The counterfeiter’s solution came with the advent of desktop computers controlling metal-cutting lasers. Computer-enhanced, laser-cut dies have few physical problems, but they are very expensive. While low-quality dies can be obtained for around $250 to $500 for a three-die set, the higher-quality dies run about $2,000 to $3,000 per set. Like all dies, they wear out and must be replaced. For example, the U.S. Mint makes about 6,000 American Eagle bullion coins per die set, and about 300–500 Proofs per die set. To produce convincing results, counterfeit dies must be replaced at that same rate. 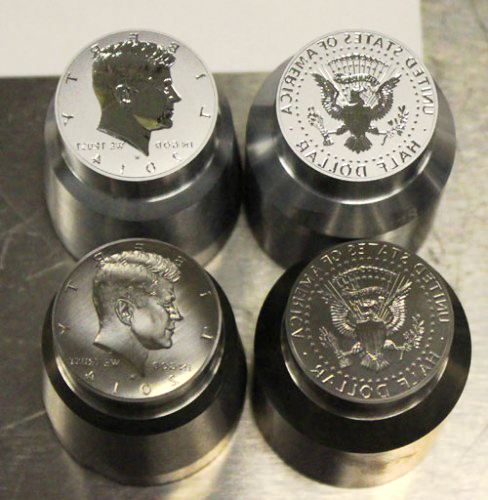 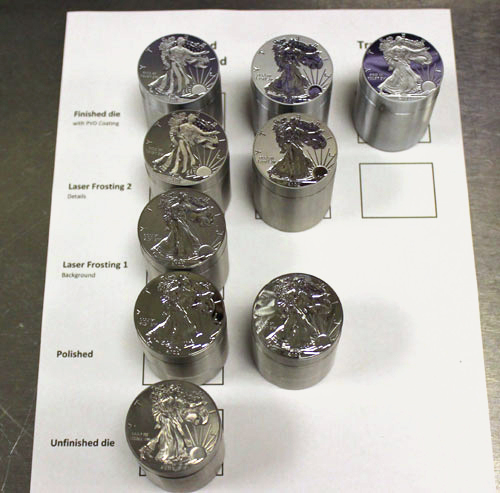 In the next installment of this series, we’ll examine Gregory V. DuBay’s D-1 to D-4 counterfeit classification system, along with examples of all four levels of counterfeit-die quality.