The highest price realized for an individual coin within the collection occurred for a 1794 Liberty Cap With Pole variety (Cohen-7) Half Cent, graded PCGS MS67RB that was discovered at a small coin show in Switzerland in 1977. The piece carried an estimate of $500,000, but ended up realizing $1,150,000 including buyer’s premium. Not far behind, an 1811 Classic Head Half Cent graded PCGS MS66RB sold for $1,121,250. 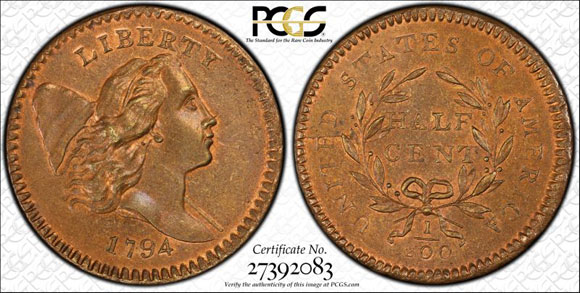 Conducted in Los Angeles by Ira & Larry Goldberg Coins & Collectibles, Inc. of Beverly Hills, California (http://www.goldbergcoins.com) in conjunction with well-known early American copper specialists Bob Grellman and Chris McCawley, the auction broke records as the Hall of Fame collection was broken up so other collectors could have the opportunity to own some of the finest known examples of the historic, early American copper pieces.

“This was the only collection of certified U.S. half cents ever formed that contained every variety of half cent struck for circulation, and the only collection to contain every variety of half cent struck only in proof.  PCGS certified each coin in the collection, and the Missouri Cabinet Collection ranked number one in all eight PCGS Set Registry categories applicable to half cents,” said PCGS President Don Willis.

“I was at the sale, and it was very well attended by not only half cent and copper collectors but by many type coin collectors as well,” said Willis.

“Bidding was spirited to say the least, with fierce competition from many bidders.  All the attendees knew that this was a once-in-a-lifetime opportunity.  Because of all the competitive bidding, only 77 lots were sold in the first two hours.  Prices were shattered across the board at all levels. Never before has a half-cent sold for a million dollars at auction, yet the Missouri sale had two coins break that mark.  The Goldbergs did a superb job of managing this sale and as Larry Goldberg said, ‘this is the finest specialized collection he has ever seen.'” 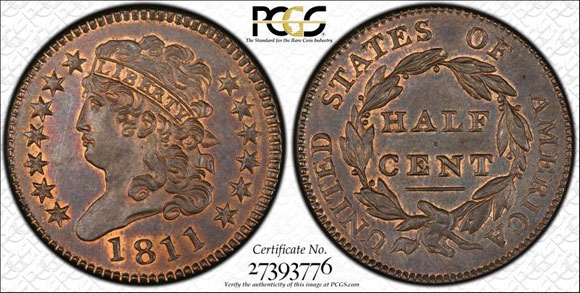 “Because they were in PCGS holders, the bidders and buyers liked the way the coins were graded and paid new world-record prices,” said auction house co-owner Larry Goldberg.

“We were very happy with the results and the prices were very strong. Promoting of this sale for over a year and the catalog write ups also helped us realize these very high prices.  Another factor was this group offered at auction is the best collection of half cents ever assembled, and the buyers wanted to obtain these coins.  It truly was an amazing auction.  I’ve never attended or seen any auction in my lifetime like this one,” he stated.

The Missouri Cabinet was the result of collaboration between Mr. R. Tettenhorst (“Tett”) and the Eric P. Newman Numismatic Education Society (EPNNES) in St. Louis.  Assembled over forty years, the Missouri Cabinet contained numerous examples from the famous Philip M. Showers and Colonel E. H. R. Green collections, plus specimens from many other fine collections.

The name “Missouri Cabinet” came from research and author Walter Breen when he visited St. Louis to take photographs of the coins for his 1983 book, Walter Breen’s Encyclopedia of United States Half Cents 1793-1857.

The PCGS Set Registry was established in 2001 and now hosts over 69,000 sets. For additional information about PCGS and its services, visit http://www.PCGS.com or call PCGS Customer Service at (800) 447-8848.