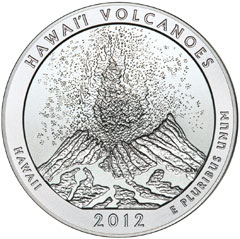 The United States Mint has concluded production for each design available for the 2012 America the Beautiful Five Ounce Silver Bullion Coins. Production levels for the coins featuring Hawai’i Volcanoes National Park and Denali National Park and Preserve were only 20,000 coins each.

Under Public Law 110-456, the Mint is authorized to strike and issue five ounce .999 fine silver bullion coins which feature duplicate designs of the coins issued for the America the Beautiful Quarters Program. As with other bullion programs, the coins are sold through a network of authorized purchasers who are able to place orders for bulk quantities of the coins based on the market price of silver plus a mark up. These primary dealers are then responsible for distributing the coins to other bullion dealers, coin dealers, and the public, as well as facilitating a two way market.

When the US Mint launched the program near the end of 2010, the coins were initially a hot commodity due to the unexpectedly low production runs of only 33,000 per design. With high initial demand and a limited supply of available, one authorized purchaser began accepting orders for the coins at a significant premium to silver value. After some customers complained, the Mint halted sales and later resumed with special terms and conditions for authorized purchasers to follow, which included price limits and household ordering limits.

For 2011, the Mint significantly boosted production levels with an indicated initial production quantity of 126,700 for each of the five designs. After the coins featuring Gettysburg National Military Park and Glacier National Park sold out of these initial quantities, demand for subsequent designs fell. Large remaining quantities of coins with the designs for Olympic National Park, Vicksburg National Military Park, and Chickasaw National Recreation Area remained within inventory and continued to be offered into the following year. After this experience, the US Mint adjusted their production levels significantly lower for the 2012-dated releases.

Michael White of the United States Mint Office of Public Affairs has confirmed that production of the 2012 America the Beautiful Silver Bullion Coins has been concluded. Total production for each design is indicated below:

According to the latest available figures on the United States Mint’s website, authorized purchasers have ordered the entire production quantities for the Acadia, Hawaii, and Denali National Park designs. Order have been placed for 21,900 out of the 24,000 for El Yunque National Forest and 20,000 out of the 24,400 for Chaco Culture National Historical Park coins.

The United States Mint has offered numismatic versions of each release of the America the Beautiful Five Ounce Silver Coins. These are struck with an uncirculated finish created through a vapor blasting technique and carry the “P” mint mark. Each of the 2012-dated designs carries a maximum production limit of 25,000 and still remains available for sale on the Mint’s website.