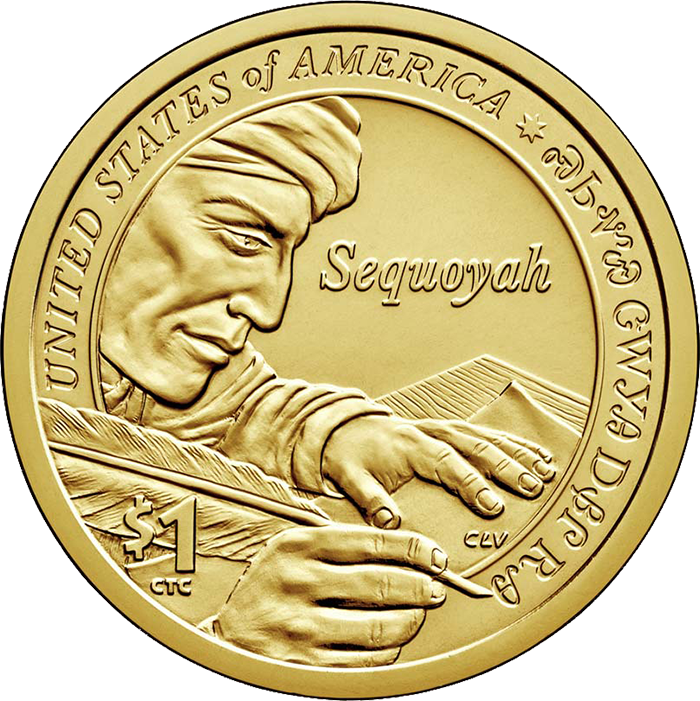 The U.S. Mint’s product page for the 2017 Native American dollar has been updated with the first-ever photo of the coin’s reverse. This completes the design’s long journey from one of several competing concepts to the finished coin. This year’s design honors Cherokee scholar and statesman Sequoyah, creator of the Cherokee language.

As discussed in more detail in a Mint News Blog post, the Cherokee leader Sequoyah could neither read nor write English—but, understanding the value of written language, he devised a writing system for his people. The result of years of effort was a syllabary—a written language using symbols that represent the basic syllables that are used, in various combinations, to form a language. The Cherokee syllabary remains in use to this day.


The reverse of the 2017 Native American dollar was designed by Mint Artistic Infusion Program designer Chris Costello, and sculpted by Mint sculptor-engraver Charles L. Vickers. At the left side of the central motif is the scholar and statesman Sequoyah in profile to the right, writing “Sequoyah from Cherokee Nation” in the Cherokee syllabary. The design is arranged such that his feather quill is simultaneously writing on paper, as part of the central design, and around the border of the field, as part of the legend. In the field to the right is the word Sequoyah; at lower left is the denomination, $1; and, reading clockwise from the left, UNITED STATES of AMERICA, a seven-pointed star, and Sequoyah’s written words.

The obverse of the 2017 Native American $1 Coin will continue to feature sculptor Glenna Goodacre’s familiar “Sacagawea” design, introduced in 2000. Inscriptions are LIBERTY and IN GOD WE TRUST. The year, mintmark, and E PLURIBUS UNUM are incused on the coin’s edge.