The Mint of Poland have launched one of the most innovative methods for producing a coin, very unusual in the sense that it now describes their special style as incorporating a “third” side to carry a design. Launched at the World Money Fair in Berlin, the Mint of Poland showed off their technique to apply a design to the actual sides on the coin, in this case a six-ounce silver planchet with a thickness great enough to support the striking of the blank with a detailed and integral design which also forms a part of the theme and subject of the commemorative coin. In the case of this issue, the theme is Mercury, the God of tradesmen and travelers, who was often depicted on Roman coins. He was believed to bring good luck in business and commerce, and his winged staff was believed to protect merchants. The Roman depiction of Mercury was often accompanied by the inscription “FORTUNA REDUX” which meant happy coming home from a business meeting or extended visit. 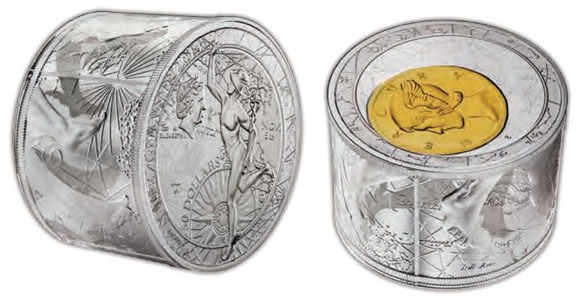 The Mint of Poland’s own cylindrical coin, the first in the world, was the result of a lengthy process of research and technological technique resulting in the “Fortuna Redux”, a very beautiful numismatic product when examined in person. With a value of NZ $50, it is the world’s first coin with such unprecedented spatial proportions of height and width. The height of the coin is about 70 percent of its diameter (typically its 5- 10 percent) but thanks to the unique shape of the disk, it has about 200 percent more relief image surface. Also included are several important security features such as micro-text and micro-engraving incorporated into the actual design. During the presentation at the World Money Fair, the procedure of the minting process was detailed by the Mint of Poland’s technical expert who described the technique of preparing the coin’s third side where the flat image had to be transferred onto a cylindrical surface and divided into 4 segments of collar dies.

Struck for the South Pacific island of Niue to proof quality, the coin’s innovative dimensions include a 32 mm. diameter with a weight of 6 ounces of .999 fine silver. The coin’s height is 22.1 mm. and the mintage has been set at 2,500 pieces. The break-through coin was designed by Urszula Walerzak, one of the Mint of Poland’s senior artists. The coin is packaged in a presentation box enabling the owner to view it from all angles and is scheduled to be made available from the 15th February.

For more information on this and other coins, please visit the website of the Mint of Poland at: http://www.mennica.com.pl/en/main-page.html Information available in English, Polish & Russian.