The first 2-ounce silver coin in the Mint of Poland’s new Ancient Myths series features the Trojan Horse, which according to Greek mythology was used by the Greeks to secretly invade the city of Troy during the Trojan War.

The coin is composed of 99.9% silver, carries an antique finish, and has a mintage limited to 500 pieces. It is struck in high relief and includes a serial number on the edge. A certificate of authenticity is also included with the coin, which is available for $259.90. The coin’s reverse bears an image of the Trojan horse after being pulled through the gates into the city of Troy. A wooden disc is placed near the center of the coin and TROJAN HORSE is inscribed near the rim. 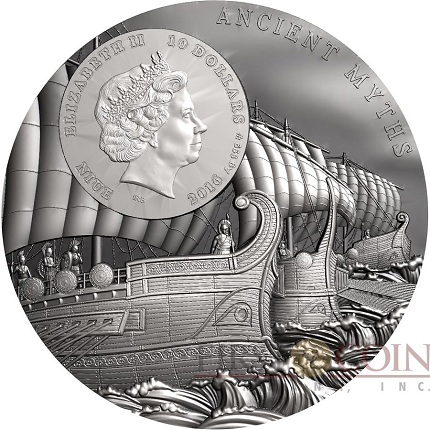 The obverse bears an intricately detailed image of Greek ships sailing in choppy waters to invade Troy. ANCIENT MYTHS is inscribed near the rim, while ELIZABETH II, 10 DOLLARS, Ag 999, 2016, and NIUE, the country of issue, are placed around Ian Rank-Broadley’s portrait of Queen Elizabeth II, which is situated over the ships’ sails.

The 2016 Ancient Myths: Trojan Horse 2 oz. High Relief Silver Coin is available from Mint of Poland distributors such as First Coin Company. While pre-orders are currently being accepted, the item will begin shipping later this month.