The Mint of Finland have unveiled a new series of coins dedicated to the animals of the provinces of Finland.

The Mint of Finland began minting provincial coins in 2010. In 2012–2013, the series depicted the landmark buildings of Finland’s historic provinces, while the coins minted in 2010–2011 featured traditional livelihoods and provincial culture along with the crests or, coats of arms of each province. Following in the successes of the provincial buildings series and the historical provinces series, the new coins focus on the wildlife found in the country with startling images featured on the obverse sides.

The first two coins in the series will open with the provinces of Karelia and Savonia being represented.The obverse sides of provincial animal coins are designed by Erkki Vainio and reverse sides by Nora Tapper. 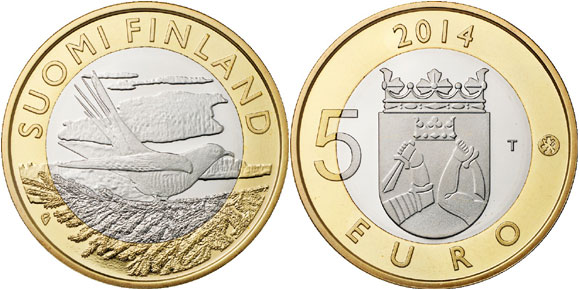 Karelia: The cuckoo has long been the provincial bird of Karelia. Thus, Karelia’s provincial animal depicts this very bird, behind which includes a traditional Karelian lake vista. The coin’s reverse bears the historic coat of arms of Karelia.

Savonia: The provincial bird of Savonia, the black-throated loon, is a familiar sight on rugged, clear lakes. The coin of Savonia depicts this beautiful bird swimming on the rippling surface of a Savonian lake, with an island visible in the horizon. The coin’s reverse includes the historic coat of arms of Savonia.

The collector coins of Karelia and Savonia inaugurating the Animals of the Provinces series will be available from the Mint of Finland’s online shop and from retailers on 27 May. The series will continue with the coins of Finland Proper and Åland in the autumn. The proof-quality coins are offered in a protective transparent casing set in a package that tells the coin’s story. Five hundred of each UNC-quality collector coins will be packaged with numbered certificates of authenticity. The Provincial coins can be purchased for their nominal value in purses of ten.

For more information on these and other coins offered by the Mint of Finland, please visit their website at: http://www.suomenrahapaja.fi/eng/5-special-commemorative-coins/297/dg Information offered in English, Finnish and Swedish – international orders dispatched.