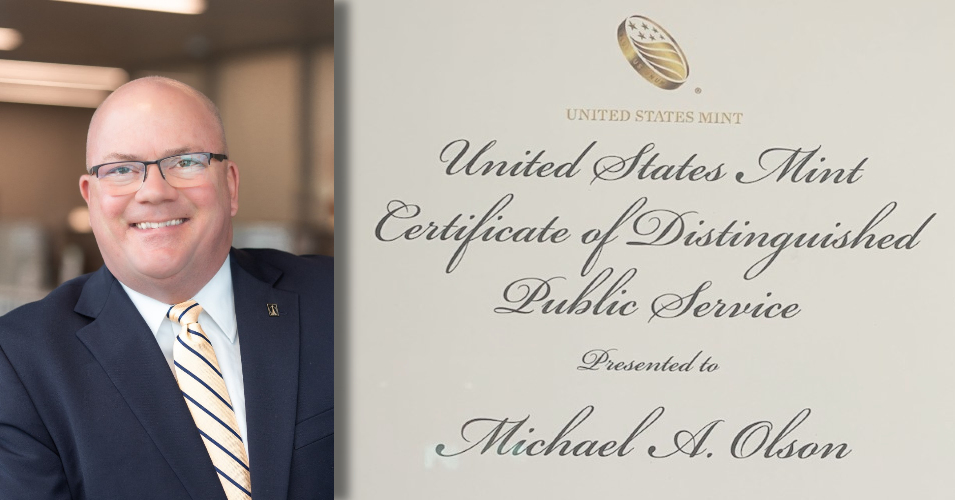 Michael Olson, a former member of the Citizens Coinage Advisory Committee who originally proposed the idea of commemorating the 50th anniversary of the 1969 Apollo 11 Moon landing and spearheaded passage of the legislation that created the set of coins issued in 2019 for that event, recently received a Director’s Award from U.S. Mint Director David Ryder for his major contributions to that coin program.

U.S. Mint directors have a longstanding tradition of awarding excellence among Mint employees with various awards including Rittenhouse medals modeled after one created in 1871 by Charles Barber that depicted the first U.S. Mint director, David Rittenhouse.

Achievements made in service to the U.S. Mint by people not employed by it include medals given to individuals who have served on the CCAC and the Director’s Coin of Excellence — modeled on a tradition in the military of commanders awarding coins to personnel who perform beyond expectations. One of those was given in 2011 to NGC Vice President Miles Standish. 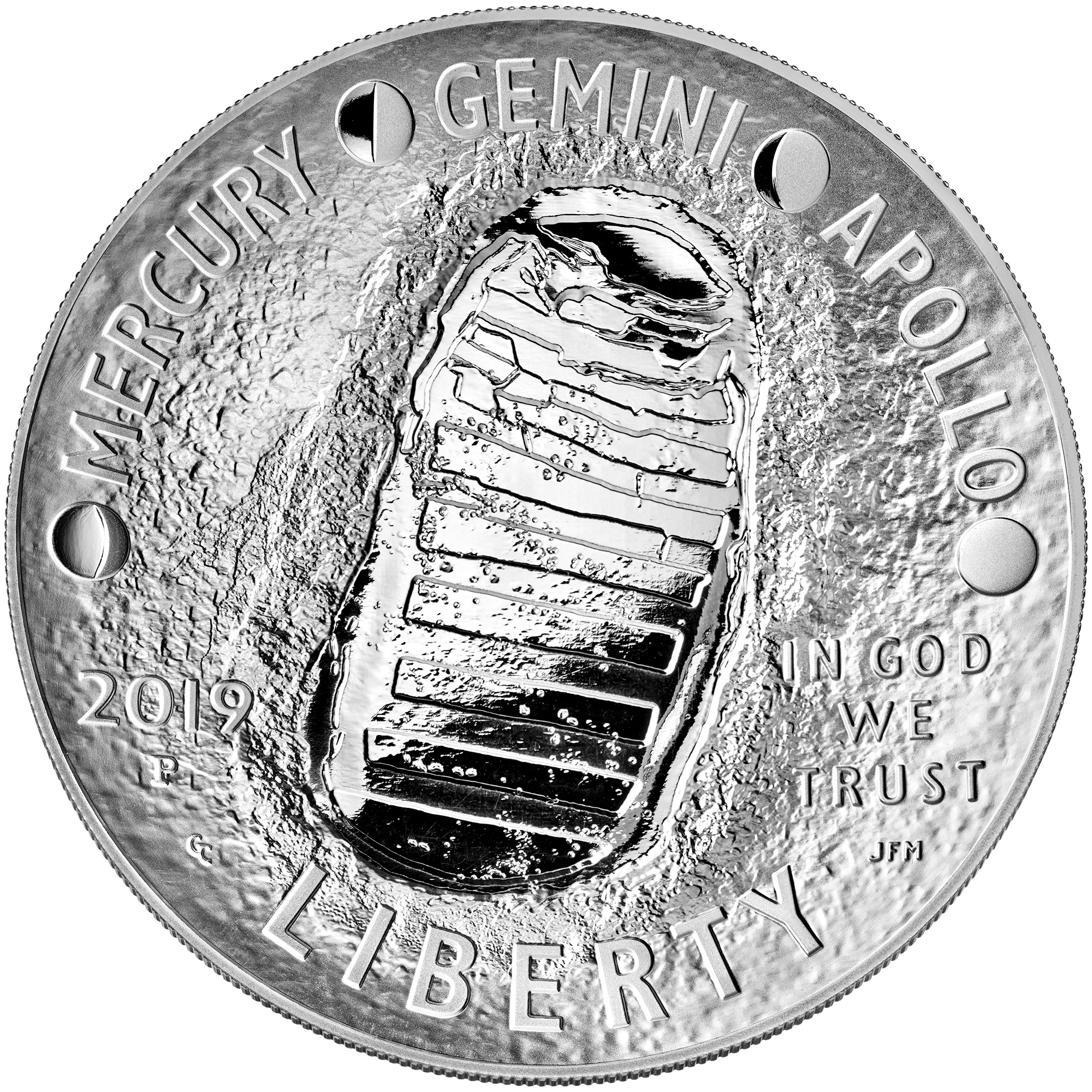 In 2019 the U.S. Mint released clad half dollars including a special Kennedy half dollar, silver dollars, $5 gold coin, and a five-ounce silver Proof coin all in the domed shape that has become popular with collectors. The concave obverse of each coin depicts the iconic first lunar footprint of Neil Armstrong and was designed by Maine artist Gary Cooper, while the convex reverse designed by U.S. Mint sculptor-engraver Phoebe Hemphill features a representation of a famous photograph taken by astronaut Buzz Aldrin while on the moon. The clad half dollar was also sold in sets paired with coins from the Spanish and Royal Australian Mints. 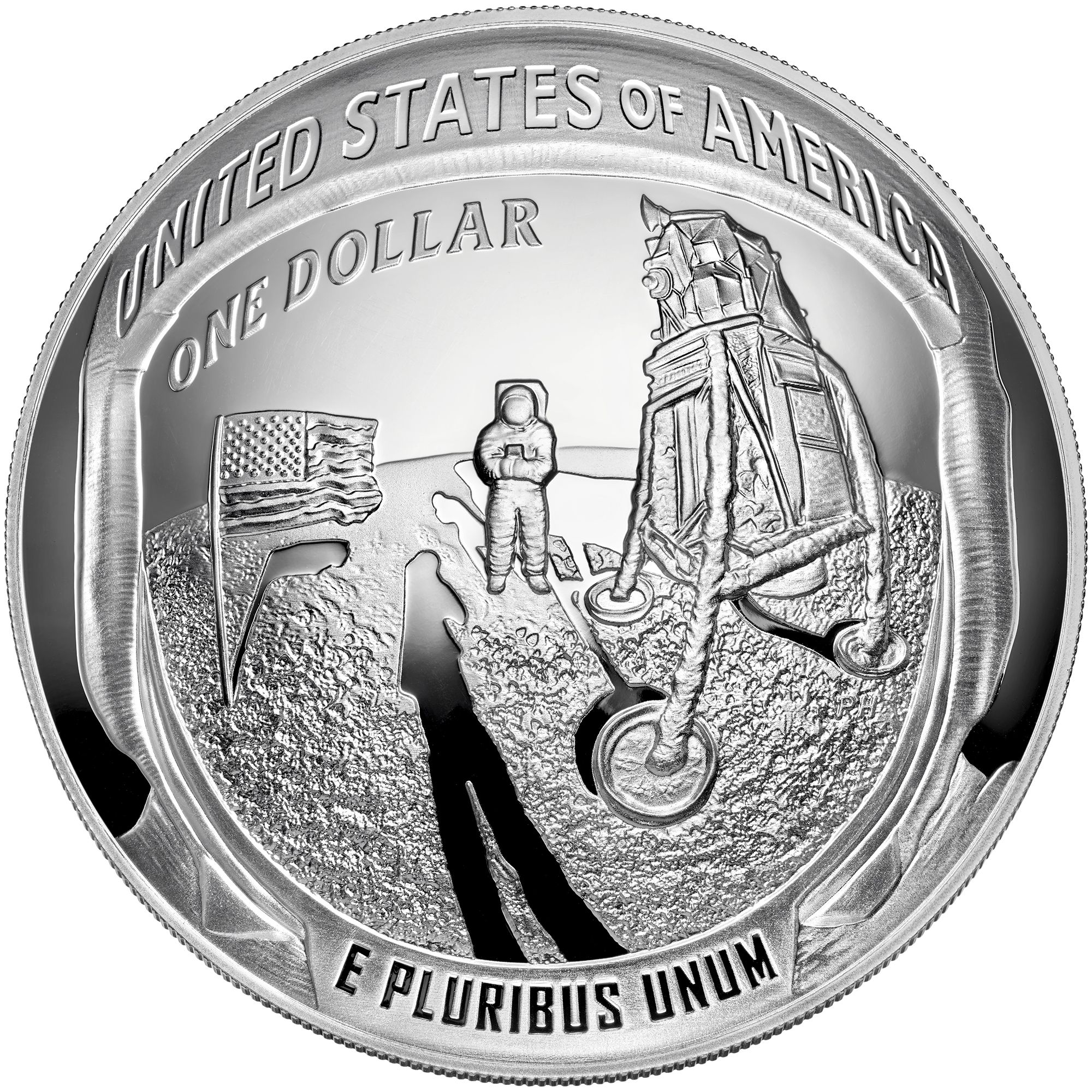 The Apollo 11 five-ounce silver Proof coin received the prestigious Coin of the Year award in March, as well as the awards for Best Contemporary Event Coin and Best Silver Coin that are part of the same annual world coin awards program run by Krause, now in its 38th year. That mirrored what happened in 2016 when the 2014 Baseball of Fame coin also won both Coin of the Year and two individual awards.

In an acceptance statement, the Mint said how proud it was to be part of the commemoration of the 50th anniversary of the moon landing and that the five-ounce silver coin “represented a special achievement in the Mint’s technical capabilities.”

That coin was a major technological challenge for the Mint and is the first-ever curved coin of that size and the first Proof coin of that weight. The five-ounce coin used the same planchets used for the five-ounce silver quarters of the America the Beautiful series. 400 dies for the large Apollo coins had to be individually machined and hand-polished, which was a time-consuming task. Initially, it took 11.5 hours to prepare the dies, but the staff was able to later reduce that to 4.5 hours and to extend the life of each die so that not as many were needed.

Mint staff had only 90 days to prepare the dies and strike the coins before the release, and the issues with the dies resulted in not enough coins being available on release day to meet the demand of buyers, which is why the coins went to backorder status the same day. 68,259 of those coins were eventually sold with over 51,000 of them sold on release day.

This coin program was one of the Mint’s best-selling commemorative coin programs in years, generating $56 million in revenue for the mint which resulted in $8.4 million in surcharges that went to two organizations involved in promoting science and math education and honoring astronauts: The Astronaut Scholarship Foundation and Astronaut Memorial Foundation and the Smithsonian Institution Air and Space Museum.

The Director’s Award for work performed on the Apollo 11 Commemorative Coin program consists of a paper certificate produced by the Mint’s in-house graphics department. There is no monetary award, coin, or medal presented in conjunction with the framed certificate. The Mint identified more than 100 employees to receive the Director’s Award for their work on the Apollo 11 50th Anniversary five-ounce Proof silver coin. The bulk of the employees recognized work at the Philadelphia Mint where the Apollo 11 five-ounce Proof silver coin was produced. 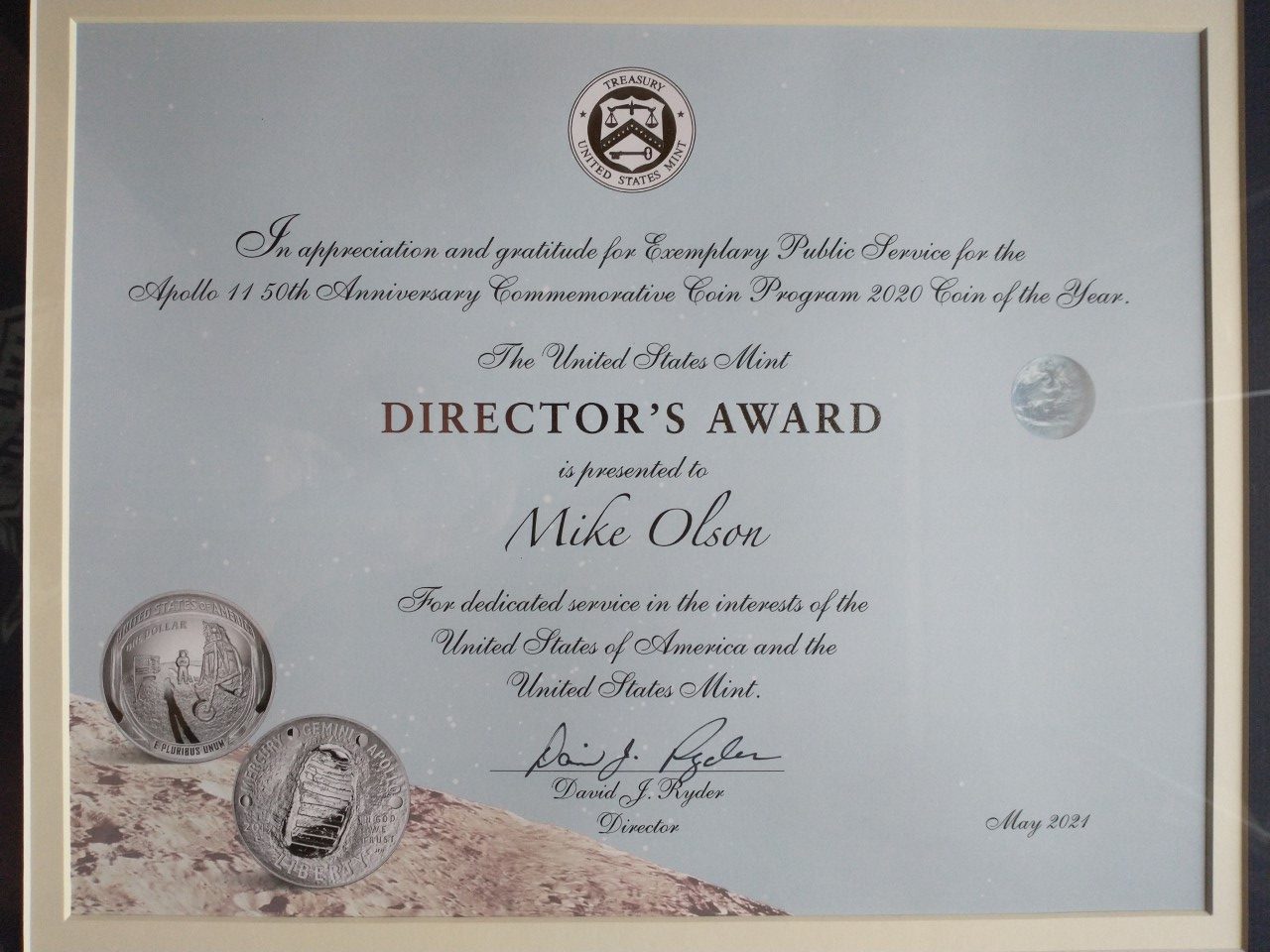 It was very exciting to learn that the 2019 Apollo 11 five-ounce commemorative coin was awarded 2021 Coin of the Year. America is a great country that accomplished a technological achievement which has yet to be surpassed 50 years later. All Americans should be proud that the coin our country produced to commemorate this achievement was judged best in the world. Further, it is gratifying to see other countries that also produced Apollo 11 coinage in 2019 recognized in other COTY categories.

Winning the 2021 COTY award and coming in first from a field of 400 coins from 45 countries in my view is like taking gold at the Olympics.

Proposing the Apollo 11 commemorative coins in 2014 while serving as a member of the Citizens Coinage Advisory Committee and working with an incredible team of people to get the legislation introduced and passed was an experience of a lifetime that I am incredibly thankful for. The U.S. Mint’s execution of this historically significant coin certainly merits the COTY recognition it received.

Receiving the United States Mint Director’s Award for my role in making the Apollo coins a reality is truly an honor and it is my hope that these historic pieces will continue to inspire dreams of future space exploration while recognizing America’s past triumphs.

While Apollo coins are no longer available from the Mint, collectors can support the mission of the Astronauts Memorial Foundation by purchasing PCGS slabbed First Day of Issue/Launch Ceremony Apollo coins of all varieties at www.amfcse.org. Apollo 13 Astronaut Fred Haise autographed options are available, as are those in original government packaging.