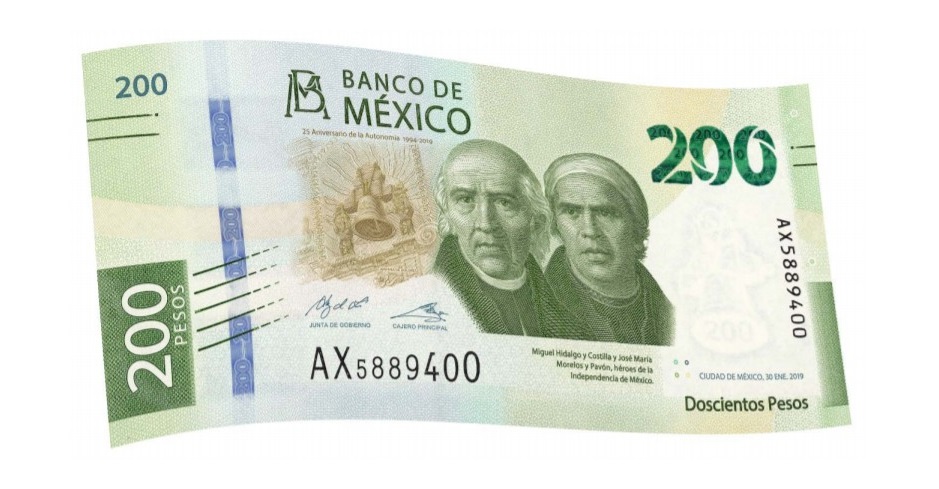 The Banco de Mexico has announced (2nd September) the issue of their second banknote which is part of the bank’s “G” series. The 200-peso banknote (U.S. $10.05) sees a new design in terms of historic Mexican personalities, who are now featured, and a back design which highlights the landscape and natural beauty of the North American country. Replacing the current personality on the “F” series banknote, the writer Juana de Asbaje y Ramírez de Santillana (1651-1695), are two men who are remembered as having initiated Mexico’s revolution for independence from Spain.

The new face features Miguel Hidalgo y Costilla (1753–1811), a priest, who, on the 16th September 1810, called upon the population through what is popularly known as “El Grito de Dolores” (“Cry of Dolores”) and started the independence movement.

The second image is of José María Morelos y Pavón (1765–1815), who assumed the leadership of the independent movement after the death of Hidalgo and is known as the “Siervo de la Nación” (“Servant of the Nation”).

As 2019 is the 25th anniversary of the Banco De Mexico’s independence as an autonomous entity within the federal structure, the notes will also include the commemorative inscription of 25 ANIVERSARIO DE LA AUTONOMÍA 1994-2019, which is placed just below the bank’s name and logo, shown at the top of the primary design. Below the portraits is the text MIGUEL HIDALGO Y COSTILLA Y JOSÉ MARÍA MORELOS Y PAVÓN, HÉROES DE LA INDEPENDENCIA DE MÉXICO. The vignette is an engraving of the Bell of Dolores (or Esquilón de San José), a symbol of the beginning of the War of Independence, which is currently located in the central balcony of the National Palace in Mexico City. 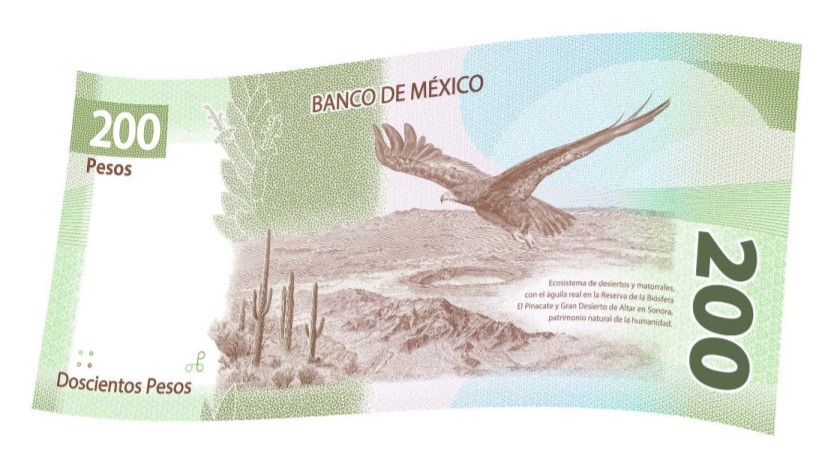 The back features the image of a royal eagle, which represents Mexico’s scrubland and desert ecosystem found at the Pinacate and Gran Desierto de Altar Biosphere Reserve in Sonora. The area and site are designated by UNESCO as a World Heritage Site and are considered just one of many examples of the natural wealth found and distributed throughout the national territory. Below the primary illustration is the text ECOSISTEMA DE DESIERTOS Y MATORRALES, CON EL ÁGUILA REAL EN LA RESERVA DE LA BIÓSFERA EL PINACATE Y GRAN DESIERTO DE ALTAR EN SONORA, PATRIMONIO NATURAL DE LA HUMANIDAD.

The predominant colour of the denomination is green and the substrate on which it is printed is cotton fibre paper. The new bill measures 139 millimetres by 65 millimetres. Security features include:

Holographic, colour-changing application: The multi-coloured denomination 200 appears to change hue from green to blue, depending on the visual angle, when the numeral 200 is tilted.

Watermark: Located to the right of the effigies of Hidalgo and Morelos are the Bell of Dolores, and below, the number 200, which are both visible in backlight.

Tactile print: To facilitate the identification of the banknote for visually impaired persons, there are two haptic lines incorporated into the upper-left corner.

The new notes are now available from all usual outlets such as commercial banks and government entities. The current “F” series banknotes will continue to remain legal tender until further notice from the Banco de Mexico. For additional information about the current series of banknotes and coins in use within Mexico, please visit the website of the Banco de Mexico.