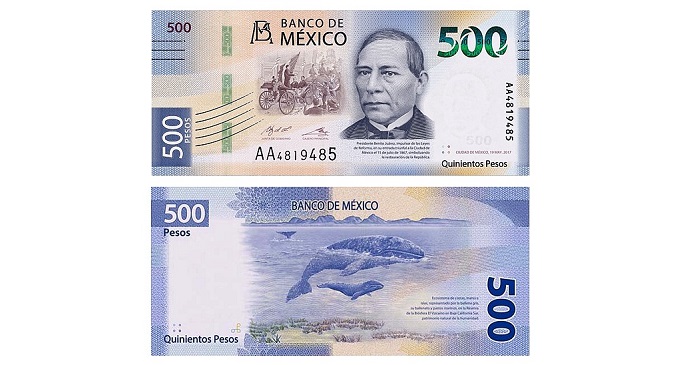 The Banco de Mexico has introduced (28th August) new 500-peso banknotes into circulation that launch a new series of currency notes and initiate three important changes to Mexican banknotes. The new 500-peso banknote (U.S. $26.30) introduces new designs, colours, and themes for the denominations that will be included in the new series. The notes will also incorporate new and updated security features since the last family of banknotes which were introduced almost 20 years ago.

Of particular interest to the new “G” banknote series is that the 20-peso denomination will no longer be issued as a banknote, but will now circulate only as the bi-metallic type coin first introduced in 1996. The figure depicted on the current 20-peso banknote, that of President Benito Juarez (1806–1872) will also transition onto the 500-peso denomination and replaces the figure of internationally renowned artist Diego Rivera (1886–1957). As the 20-peso banknote is being discontinued, there are provisions for the issue of a 2,000-peso banknote in the future, and within this new series, as and when the Banco de Mexico (and the economy) deems it necessary.

The new series will emphasise the various chapters of Mexican heritage and history, from its origins as a Spanish colony to an independent republic whose status was initially achieved in 1810. The historical chapters will focus on Old Mexico, the Colony, Independence, Reformation and the Restoration of the Republic, the Revolution, and finally — Contemporary Mexico. The 500-peso banknote highlights the chapter of Mexican history when the Second Republic was proclaimed in 1867, following the collapse of the Second Empire.

The new 500-peso banknote features blue as its predominant colour, and following the chronological order established by denomination, this value corresponds to and refers to the historical process of the reformation and the restoration of the Republic, whose undisputed leader was Benito Juarez.

The face of the new 500-peso note includes an effigy of President Juarez and is accompanied by a fragment of the engraving from the Mexican artist Alberto Beltrán, who portrays Juarez’s triumphal entry into Mexico City on the 15th July 1867. Additionally, it is this date that marks the end of the Second Empire, formally headed by Emperor Maximillian, and marks the restoration of the republic. The effigy of Don Benito Juárez has repeatedly been seen on Mexican national currency — on both coins and banknotes — and is perhaps universally remembered and admired for his defense of sovereignty, national, liberal, and republican values, as well his unrelenting effort to move from a country of confrontations and instability to one of laws and institutions.


As the face of each new banknote features historical chapters in Mexico, the back designs will highlight the six most representative ecosystems of Mexican geography. Featured will be rivers and lakes, temperate and dry forests, thickets or trees and deserts, coasts, seas and islands, and rain forests. Each scene or location will be recognised sites on the World Heritage list of the Organisation of the United Nations for Education, Science, and Culture, or, UNESCO. Also included on the back will be an element of fauna and flora identified with each one of the six ecosystems.

The back of the 500-peso note depicts the ecosystem of seas and islands, represented by the El Biosphere Reserve Vizcaíno, which is located on the peninsula of Baja California Sur. This reservation was declared a natural area and has been a protected region since 1988. This region and location are considered a “Natural Heritage of Humanity” site by UNESCO. With its five kilometres of coastal strip, The Reserve of the Biosphere of El Vizcaíno is an important sanctuary for the Gray Whale species.

The banknote is printed on cotton-based fibre paper and includes the date 19 MAY 2017. It measures 146 by 65 millimetres, with an overall blue colour-scheme and various corresponding colour underprints. Security features include:

Watermark: When viewed from the face, a watermark of the portrait of Benito Juarez is placed to the right of Juarez’s effigy.

Multi-colour application: The banknote’s numeral of 500, which is placed in the upper right corner, changes colour when tilted. The note’s denomination is also seen within the numbers.

Holographic security strip: A segmented and holographic vertical strip seen near the far left half of the banknote displays moving numerals of 500 when the note is tilted.

Tactile features: As part of the identification process for visually impaired persons, a series of horizontal dashes can be felt, which are located on the upper half of the note towards the edges.

The Banco De Mexico is scheduling the release of the complete series over a period of five years. The issue of the 200-peso and 1,000-peso banknotes will be issued in the second half of 2019 and 2020, respectively. For additional information about these and other current banknotes presently in use in Mexico, please visit the website of the Banco de Mexico.