Author Allan Schein got some good news last week when he learned that his 2014 book, Mexican Beauty, Un Peso Caballito, had received the Mexican Numismatic Society’s Alberto Francisco Pradeau Award. The announcement noted, “We are really happy to inform you that the ‘ALBERTO FRANCISCO PRADEAU’ award has been bestowed on you in consideration to your excellent book Mexican Beauty, Un Peso Caballito…the investigation, study and conclusions involved are considered of great merit for the understanding of Mexican Numismatics.” 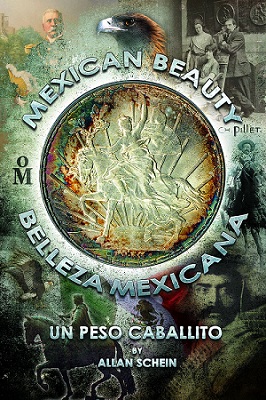 Mexican Beauty is a bi-lingual text, presented in English and Spanish, that provides in-depth history and analysis of the caballito, accompanied by hundreds of color images. Schein discovered these one-peso issues while researching coins from 1914, the year of his father’s birth.

Designed by French medalist Charles Pillet, the caballito (or “little horse”) was first issued in 1910 and was discontinued after five years. It was conceived as a commemorative of sorts, marking the 100th anniversary of the Mexican War of Independence. The reverse of the coins features a depiction of Liberty riding side-saddle (with no saddle) on horseback, hoisting a torch and an oak branch. The obverse carries a depiction of a Mexican Eagle perched on a prickly-pear cactus, holding a rattlesnake in its mouth and talons.

Allan Schein’s Mexican Beauty, Un Peso Caballito is self-published and is available on Amazon. Further studies of Mexican coinage are available in The Whitman Encyclopedia of Mexican Money, as well as in Coin Update’s Numismatic Tour of Mexico series.