The United States Mint has revealed the final design selections for the upcoming 2011 Medal of Honor $5 Gold Coin and Silver Dollar. The commemorative coins will be issued next year for the 150th anniversary of the establishment of America’s highest award for valor in action against an enemy force.

The program was authorized under Public Law 111-91 in order to recognize and celebrate the establishment of the Medal of Honor in 1861, to honor its recipients, and promote awareness of what the medal represents. Introduced as H.R. 1209 by Christopher Carney of Pennsylvania, the bill was passed in the House of May 14, 2009, by the Senate on October 22, 2009, and signed into law by the President on November 6, 2009. 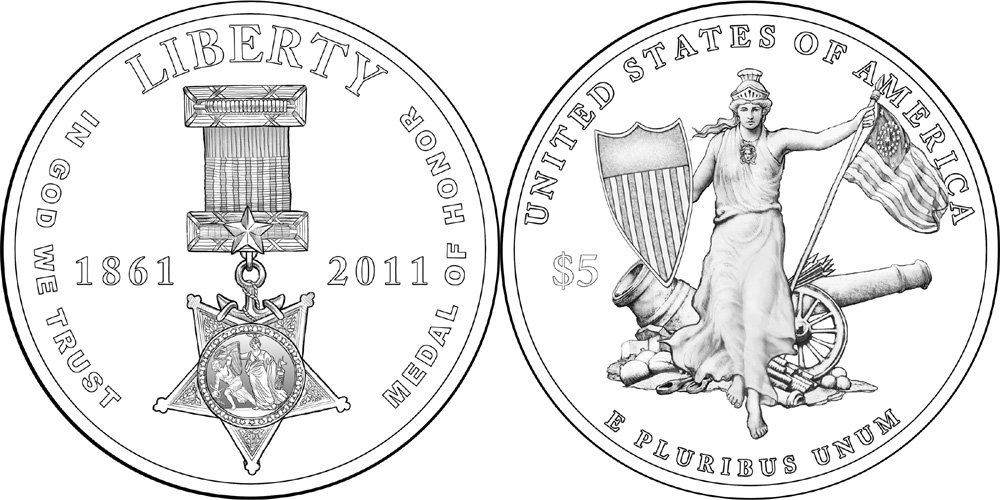 The reverse carries an image of Minerva, the Roman goddess of war and wisdom, who appears on the original Medal of Honor. She appears in full figure, holding a shield in her right hand to represent the Army and Navy and the Union flag in her left hand. Munitions and a cannon appear in the background. The reverse was designed by AIP Master Designer Joel Iskowitz and sculpted by US Mint Sculptor-Engraver Michael Gaudioso. 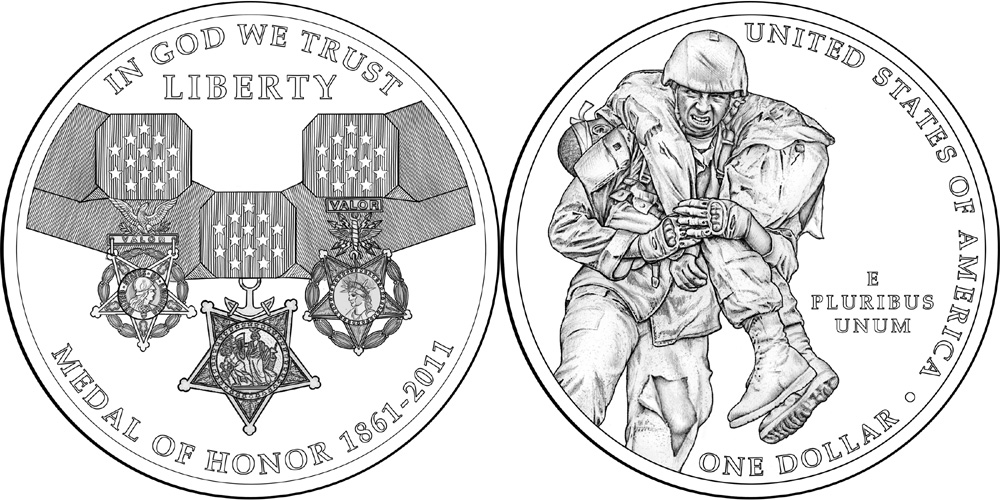 The 2011 Medal of Honor Silver Dollar is intended to represent the modern version of the medal and highlight the courage, selfless sacrifice, and patriotism of its recipients. The obverse design, designed and sculpted by US Mint Sculptor-Engraver Jim Licaretz, features the current Navy, Army, and Air Force Medals of Honor, which are worn around the neck.

The reverse of the coin is designed by AIP Master Designer Richard Masters and sculpted by US Mint Sculptor-Engraver Phebe Hemphill. An army infantry soldier is shown carrying a wounded soldier to safety.

Maximum mintages for the coins have been set at 100,000 for the $5 gold coins and 500,000 for the silver dollars. The release date during 2011 has not yet been announced. Surcharges added to the cost of each commemorative coin will be distributed to the Congressional Medal of Honor Foundation to finance educational, scholarship, and outreach programs.