In 2011, the United States Mint will issue gold and silver commemorative coins in recognition and celebration of the Medal of Honor and its recipients. Last week the Citizens Coinage Advisory Committee (CCAC) met to discuss design candidates provided by the US Mint for the obverse and reverse of each coin. The meeting also included discussion of designs for the other 2011 commemorative coin program featuring the United States Army.

The obverse design candidates for the 2011 Medal of Honor $5 Gold Coin were effectively the same, depicting the US Navy Medal of Honor as it was originally created in 1862.  Most of the members favored design 2, primarily for its simplicity. The other three designs included other elements, an aspect that Heidi Wastweet indicated she liked as portrayed in design 1.  A point of historical accuracy regarding how the Medal of Honor was worn was asked by Roger Burdette and answered by Kaarina Budow of the Mint: the original was pinned onto the recipient’s uniform, whereas the modern versions are worn around the neck.

The first two of the four candidate designs for the reverse of the gold coin were more varied, and therefore drew more distinct comments.  Mr. Burdette indicated that the use of Minerva, the Greek goddess of war and wisdom actually depicted on the Medal of Honor itself, was a positive aspect of design 2. This position was shared by Ms. Wastweet.  Michael Olson noted that designs 1 and 2 did not depict any particular service, whereas design 3 was clearly a Navy enlisted man and design 4 shows Army personnel. He indicated support the first two designs over the second two, as did Dr. Doreen Bolger.  The votes were cast, and obverse design 2 received 19 votes out of 27.  Reverse design 2 narrowly beat out design 1, 13 to 11 out of 27. 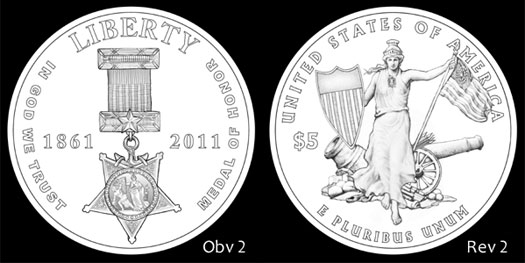 The designs for the silver dollar were intended to represent the modern Medal of Honor, and as such all of the three modern versions for the Army, Navy and Air Force were depicted.  Dr. Bolger noted that obverse design 2 properly depicted the Medal of Honor as it is worn today, rather than being separated from the neckband, as shown in design 3, or being both separated and the Army and Air Force Medals of Honor rotated outward from the Navy Medal of Honor, as shown in design 1.  Several members, including Chairman Gary Marks, Mr. Burdette, Ms. Wastweet, and Dr. Bolger, said they felt emotion in reverse design 2, which depicts one soldier carrying a wounded comrade.  The voting sent a strong message of support for the second designs for both the obverse and reverse, receiving 24 out of 27 votes cast. 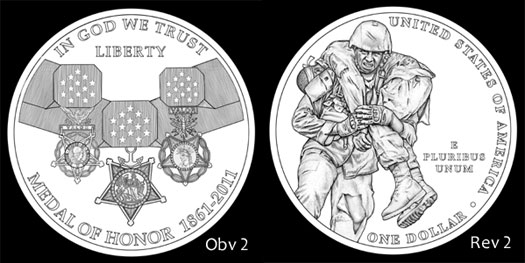 Designs Recommended by CCAC for 2011 Medal of Honor Silver Dollar 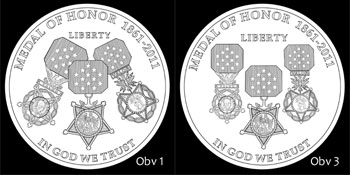 There were two members not voting for these designs, the more notable being Donald Scarinci, who was very clear that he considered the Medal of Honor coins too important to be rushed into decisions.  The rush was due to the fact that over 2-and-1/2 hours of the 3 hours allotted for the meeting were consumed by the discussions over the U.S Army commemorative coin designs, leaving merely 20 minutes for these designs.