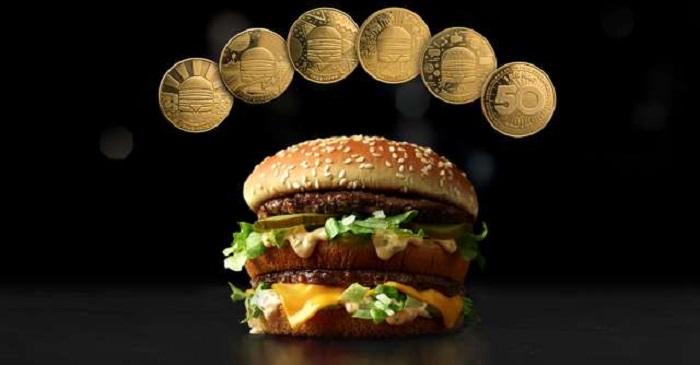 The collectible MacCoin is the first fully food-backed global currency

[Chicago, Illinois] [July 29, 2018] — To celebrate the 50th anniversary of the Big Mac, McDonald’s unveiled the MacCoin, a limited edition global currency* backed by the internationally iconic Big Mac that fans across the world can get their hands on starting August 2 to share, collect or redeem. Despite its name, the MacCoin is technically a token. Beginning at lunchtime on August 2, customers can receive a MacCoin with the purchase of a Big Mac at 14,000 participating restaurants across the U.S., while supplies last. Starting on August 3 through 2018, customers can redeem their MacCoin for a free Big Mac at participating McDonald’s restaurants in the U.S. and in more than 50 participating countries.

Below, is a video explaining the MacCoin:

More than 6.2 million MacCoins will be distributed globally in more than 50 countries while supplies last. These commemorative coins feature five unique designs, each representing a decade of the Big Mac. Each MacCoin design pulls in elements from that time in history, nodding to art, music, and pop culture, while the front-side of the MacCoin celebrates the 50th anniversary of the Big Mac. The MacCoin highlights:

Additionally, the seven languages featured across the various designs represent many of the countries participating: Arabic, English, Indonesian, Mandarin, Portuguese, French, and Spanish.

In its 50 years, the legendary taste of the Big Mac has helped it achieve universal recognition and a lasting legacy. It has become such a global icon that The Economist even used the price of the Big Mac to create the Big Mac Index, an economic tool that compares the purchasing power of different international currencies year after year. This global connectivity of the Big Mac inspired the creation of the MacCoin.


“Since it was introduced at a family-owned McDonald’s restaurant 50 years ago, the Big Mac has traversed the globe and is enjoyed in cities from Shanghai to Chicago, providing delicious, feel-good moments to people all over the world,” said McDonald’s President and CEO Steve Easterbrook. “So we wanted a global celebration as unique as the burger itself. The MacCoin transcends currencies to commemorate our global iconic burger while giving customers all over the world a chance to enjoy a Big Mac on us.”

“When my great-grandfather Jim Delligatti invented the Big Mac at his grill in Uniontown, Pennsylvania, he just wanted to make his local customers happy,” said Nick Delligatti, fourth-generation McDonald’s owner-operator and great-grandson of Jim Delligatti, the inventor of the Big Mac. “August 2 would have been his 100th birthday, and I believe he would be very proud knowing his humble sandwich has made such a lasting impression that people all around the world can enjoy it wherever they find a McDonald’s.”

*MacCoin has no cash value and is only redeemable for one free Big Mac at participating McDonald’s restaurants through 2018.