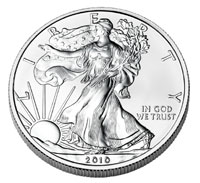 There was a surge in demand for the United States Mint’s bullion coin offerings in May 2010, as mounting uncertainties caused a renewed interest in physical precious metals. The US Mint recorded the highest monthly sales totals for the one ounce American Gold Eagle since 1999 and the highest monthly sales of the American Silver Eagle since 1986 when the bullion coins debuted.

During the month, the Mint had three bullion coin options available consisting of the one ounce American Gold Eagle, one ounce American Silver Eagle, and one ounce 24 karat American Gold Buffalo coins. Typically, the American Gold Eagle is also offered in one-half ounce, one-quarter ounce, and one-tenth ounce weights, but so far these coins have not been available, although production of the fractional weight coins began last month. Typically, American Platinum Eagle bullion coins are also offered, but these coins have not been available since 2008.

May 2010 US Mint Bullion Coin Sales

Total sales of 260,500 ounces of gold were reported for the month. This included sales of 190,000 of the one ounce American Gold Eagle, representing the highest monthly total since 1999 when 208,500 of the one ounce coins were sold. The record high stands at 609,500, achieved in October 1986 when the coins were first offered to the public. It bears noting that gold prices were significantly lower when these higher levels were achieved.

This month’s gold sales also included sales of 70,500 of the American Gold Buffalo coins, bringing year to date sales to 127,000. The 2010-dated versions of these coins were first offered in April 2010. The record annual sales for this 24 karat gold offered were achieved in the debut year 2006 when 323,000 coins were sold.  If the Mint can continue to offer the Gold Buffaloes for the remainder of this year, a new annual record may be in store.