The National Bank of Slovakia have issued (25th May) a new silver coin to honor one of their most noted sculptors, Pavol of Levoca, a medieval carver and sculptor of the 15th and 16th century, active mostly in the town of Levoča – formerly in the Kingdom of Hungary and in what is today eastern Slovakia and now UNESCO World Cultural Heritage site. The coin is issued as part of the EUROPA Silver Star series for 2012 featuring European artists.

Little is known of him, due to a fire in the town in 1550, which leave his surname and his date of birth & death unknown. Surviving records and mentions of his earlier life conclude that he was born between 1470 and 1480 and that he died between 1537 and 1542. Master Pavol is most remembered for his most famous work which was completed in 1517. The altar in the St. James church in Levoča, which is a late Gothic-style altar and is the highest in height in Europe. At 18.6 meters or 61 feet high, it is carved in wood and decorated with gold. The Madonna from this altar was also depicted on the previous 1993 issue of 100 Slovakian Koruna banknotes in use until Slovakia’s adoption of the Euro on 1 January 2009. 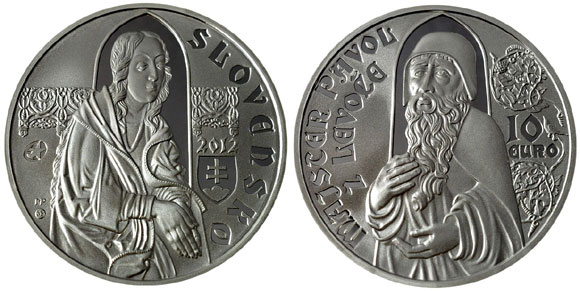 Struck by the famed Kremnica Mint in the town of the same name, the coin has a face value of 10 Euro and is designed by Mária Poldaufová. The obverse depicts the well-known image of the Madonna of the Levoca altar along with the Slovakian crest to the right and the EUROPA star insignia just to the left of the primary design.  In the background is a Gothic arch and ornamental elements from Master Pavol’s workshop. The reverse shows a detail from a sculpture of an apostle in St Jacob’s church in Levoča with a Gothic arch in the background. Towards the left edge there is the inscription “MAJSTER PAVOL Z LEVOČE” (Master Pavol of Levoča) in two lines. The denomination “10 EURO” appears between ornamental elements on the right side. An incused edge inscription appears around the coin “OD GOTIKY K RENESANCII” (from Gothic to Renaissance”).

For more information on this and other coins offered by the Kremnica Mint, please visit their website at: http://mint.sk/