After the 1928 Hawaiian Commemorative Half Dollar was issued, it stayed very calm on the silver commemorative front, the result of the Great Depression of 1929-1933. Of course there likely was talk about new issues, but the next commemoratives were not struck and released until 1934, when what perhaps can be called the “Golden Age of Classic Commemoratives” commenced. Golden age is a relative term, however, as issuers continued what had taken place on a somewhat smaller scale during the previous decade: the issuance of many different dates and minor varieties to entice collectors and dealers to purchase multiple examples of a single commemorative issue. This led to a plethora of different issues in the second part of the 1930s, for events that previously might not even have been considered worthy of a silver commemorative coin.

Right after the Great Depression the first issue is one of the very few of the 1930’s that did not exploit collectors. It was the 1934 Maryland Tercentenary Commemorative Half Dollar, struck at the Philadelphia Mint, with a total mintage of 25,000 pieces. It is a somewhat underrated issue that is often ignored in wake of the many commemoratives issued the following years, but has an interesting history related to coins that were among the earliest struck and used in the British-Colonies in North America.

Three-hundred years before the issuance of the commemorative half dollar discussed in this article, Maryland was first settled when approximately 300 English Colonists arrived aboard two ships (the Ark and Dove) and settled St. Mary’s. In 1498, the coast had first been sighted by European Explorers, and during the next 135 years some explorations had taken place along the coast, although inland expeditions remained very limited. European history of Maryland commenced in 1532, when George Calvert, 1st baron Baltimore, a family of nobility that originated in County Longford, Ireland, applied for a Royal Charter to settle the area that would become Maryland. George Calvert passed away the same year (just over a month before the charter was issued), which resulted in the charter being passed on to his son, Cecilius Calvert, 2nd Baron Baltimore and who is generally referred to in American history as Lord Baltimore. 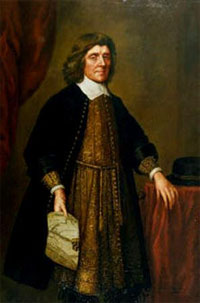 The province of Maryland (named after Henrietta Maria, the Queen consort and devout catholic) was initially founded as a Catholic settlement in the Americas. While Cecilius Calvert never visited the colony in person, he kept himself informed of the ongoing events in the new world. The province of Maryland was the first British Colony in North America that passed a law to promote religious toleration, proving to the Church of England that Catholics and Protestants could live harmoniously together, an idea that George Calvert and Cecilius Calvert both believed in.

It might not come as a surprise that the commemorative coin issued three hundred years later featured a portrait of Cecilius Calvert, although a bust of his father would have been possible as well, as he would have originally been granted the Royal Charter. The bust of Cecilius is not the first portrait of him to appear on coinage intended for the America’s. In the late 1650’s, after a brief period where Calvert lost control of the colony to Puritans, a coinage had been struck that was intended for Maryland. Most likely struck at the Tower Mint in London, the same design was used for three denominations, and featured a bust of Calvert on the obverse and the Calvert’s family coat of arms on the reverse. Mintage was extremely short-lived and in limited quantities, and all Maryland coinage is extremely rare. 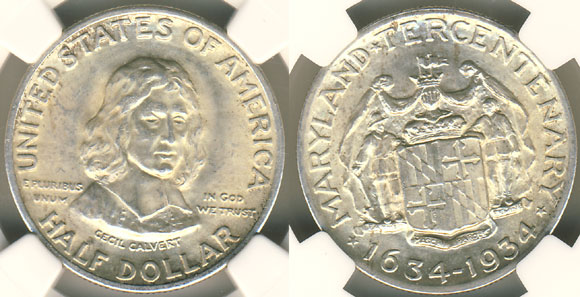 To go back to the 20th century issue with Cecilius Calvert on it, the commemorative Half Dollar featured a portrait that’s almost (but not completely) frontal on the obverse, showing a relatively young Calvert. UNITED STATES OF AMERICA is on top, with HALF DOLLAR near the bottom. “CECIL CALVERT” is seen directly under the bust in a smaller font. The motto’s E PLURIBUS UNUM and IN GOD WE TRUST are seen in an even smaller font on both sides of the bust. The fields have an interesting, almost ripple-like effect, which makes marks less apparent and makes grading of this particular coin a difficulty.

The reverse shows the coat of arms of Maryland, which is based on the heraldic banner of the Calvert Family, the family of which dates back to the 14th century. It is also used in the state flag of Maryland, which is the only flag in the United States whose design is based on English Heraldy. Two standing figures are seen next to the shield, representing Labor and Fisheries. The Italian Motto “FATTI MASCHII PAROLE FEMINE” is seen on a scroll below the shield, which is Italian and means as much as “Deeds Manly, Words Womanly”. Near the bottom rim are the dual dates 1634-1934, and the design is completed by the words “MARYLAND TERCENTENARY”.

The Maryland Tercentenary Commemorative Coin had a total authorized mintage of 25,000 pieces, as per the act of May, 1934 and the total authorized number of coins was struck. The Maryland Tercentenary Commission was responsible for sales, commencing in July 1934, and initially sold the coins at $1 each, plus shipping. Sales can be classified as “good”, although approximately 5,000 coins remained unsold and were sold at a discount in March and April of 1935, after which the issue was “sold out” and the sales office closed.

Many (as much as 15,000 coins) were sold in small quantities to individual collectors, who generally took care of the coins, although some were mishandled as well. Gems are readily available to the collector wishing to spend less than $300, but finer pieces generally prove to be elusive, especially in MS-67 or better (NGC has graded three MS-68 coins, while PCGS has certified none at that level). An extremely limited number of Matte Proofs (estimated four to six, although only two have been certified by PCGS and NGC combined) were also struck at the Philadelphia Mint, for unknown reasons, and these are extremely rare and very seldom become available.