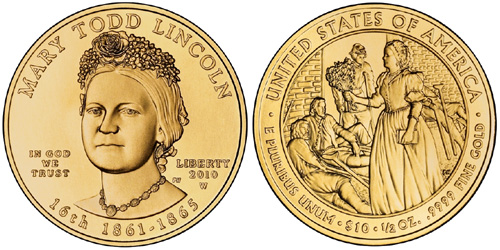 Mary Todd Lincoln was the wife of the 16th President Abraham Lincoln. She served as the First Lady from 1861 to 1865. The series of First Spouse Gold Coins was authorized under Presidential $1 Coin Act of 2005, which provides for the issuance of both circulating dollar coins honoring each of the Presidents of the United States and gold coins emblematic of the spouse of each President. The Abraham Lincoln Presidential Dollar was released into circulation on November 18, 2010.

The Mary Todd Lincoln First Spouse Gold Coin features a portrait of the First Lady on the obverse with inscriptions indicating her name, order and dates of the Presidency, “In God We Trust”, “Liberty”, the date, and mint mark. The reverse depicts a scene of her bringing books and flowers to wounded Union soldiers. The inscriptions indicate the legal tender face value of “$10”, weight and fineness of the gold content “1/2 oz. .9999 fine gold”, “United States of America”, and “E Pluribus Unum”.

Coins are available in both proof and uncirculated versions, priced at $854 and $841, respectively. This price is subject to potential change based on the average market price of gold.

The mintage limit for the Mary Todd Lincoln Gold Coin has been set at 20,000 coins across both options. This is 5,000 units higher than the mintage limits set for the other 2010 First Spouse Gold Coins. The coins will remain available for sale for approximately one year, or until the maximum mintage has been sold, whichever occurs first.