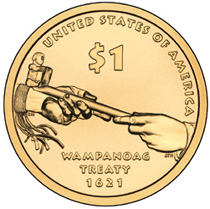 Coin collecting events during the month of March 2011 will include the ANA National Money show held in Sacramento and the Whitman Coin & Collectibles Expo held in Baltimore. The two major coin grading companies PCGS and NGC will be attendance for on-site grading. An international numismatic fair will also be held in Germany.

The 2011 Native American Dollar will receive some attention this month. An official launch ceremony is planned for March 25, after two precious cancellations due to snow. A few days later, the US Mint will begin sales of numismatic rolls for collectors. The $1 coin highlights the Wampanoag Treaty of 1621 with a depiction of the hands of the Massasoit of the Great Wampanoag Nation and Governor John Carver exchanging the ceremonial peace pipe.

Other US Mint releases include the 2011 America the Beautiful Quarter Proof Sets, in clad or 90% silver compositions. These coins have previously been released with the full annual sets available for sale since January. Not currently scheduled, but possibly released during March is the Eliza Johnson First Spouse Gold Coin. This one-half ounce 24 karat gold coin will feature the wife of the 17th President of the United States.