The Central Bank of Malta has issued a third coin in the series of €2 commemorative coins highlighting milestones in Malta’s Constitutional History. The theme of this new coin is ‘Self-government – 1921’.

Malta was granted a form of self-rule by the British government in 1921, in the aftermath of the First World War and the socio-economic hardship it left in its wake. Although the United Kingdom retained direct control over various key administrative functions, the new constitution granted Malta increased powers of self-government including an elected Cabinet of Ministers which for the first time became responsible for the administration of local affairs. Malta eventually achieved total independence as within the commonwealth on the 21st September 1964 retaining Queen Elizabeth II as Queen of Malta and thus Head of State. Malta declared itself a republic on the 13th December 1974 and inaugurated their first President as head of state. Malta joined the European Union on the 1st May 2004. 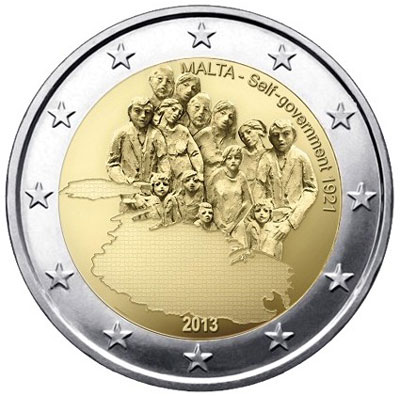 The obverse depicts a map of the Maltese islands and a representation of the Maltese population designed by the Maltese artist Ġanni Bonnici. The reverse of the coin includes the €2 circulation design common to all EURO coins within the euro-zone. The commemorative coin will be issued in circulation quality in rolls of 25 coins each, and a limited number of this coin will also be issued in proof quality. The coins were minted by the Royal Dutch Mint.