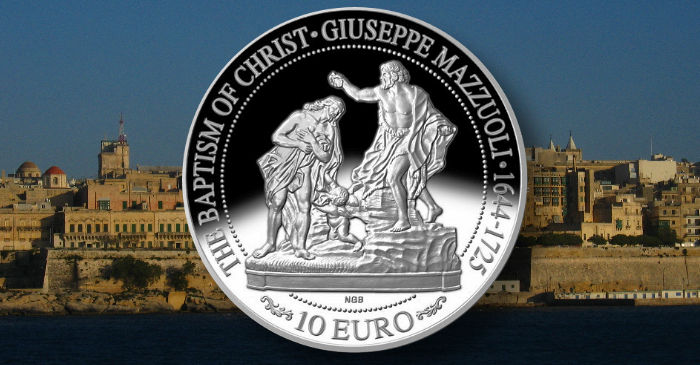 The Central Bank of Malta have issued (14th March) their new collector coins which are part of the Europa series focusing on various eras of art and architecture featured on the seven circulating denominations of the euro currency bank notes. Coins for 2018 focus on the Baroque and Rococo periods, and in the case of Malta, their coins depict Giuseppe Mazzuoli’s famed statue entitled The Baptism of Christ.

Giuseppe Mazzuoli (1644–1725) was an Italian sculptor whose style of works was predominantly in the Bernini-derived Baroque style. He produced many highly accomplished sculptures which were considered monumental in scale. His work caught the eye of those heading the Order of Malta when he was commissioned to sculpt a statue for the main altar of St. John’s Co-Cathedral in Valletta which he completed in 1703. Mazzuoli also created a marble group of pieces depicting the Baptism of Christ which may have been influenced by the undocumented and abandoned designs from 1666 of Melchiorre Cafà (1636–1667), a Maltese Baroque sculptor. In the same church, Mazzuoli produced in his later years the allegorical figures for the tomb of Ramon Perellos y Roccaful (1637-1720), who was the Grand Master of the Order of Malta.

The coins are minted at the Royal Dutch Mint, on behalf of the Central Bank of Malta, and are designed by Noel Galea Bason. The reverse side of the coins which is shared on both the gold and silver versions depicts The Baptism of Christ, a monumental white marble sculpture executed in Rome by Giuseppe Mazzuoli and installed in the apse of St. John’s Co-Cathedral in 1703.

The obverse side of the coins features the coat of arms of Malta, which is integrated with the series’ standard Europa star design that will be used for the duration of the series and by all countries who participate in the star programme.

Each coin is encapsulated and presented in a custom case and accompanied by a certificate of authenticity. The coins are available directly from the Malta Coins Centre by visiting their website.