The Central Bank of Malta have issued two new coins within the continuing series honoring the Knights of St. John of Malta. The latest coins depict the Auberge D’Aragon, the 16th century baroque style castle which is situated in Valetta, the capital of Malta.

The Auberge D’Aragon is quite significant to the Knights of St. John. Built in the 1570’s according to a plan designed by the Maltese architect Gerolamo Cassar, it is the only one of the Auberges still standing as it was originally built in the 16th century. Following the departure of the Knights and the arrival of the British in Malta in the early 19th century, the Auberge d’Aragon was used for military administration purposes. Around the middle of that century a Doric portico was added to the building to embellish its austere façade. With the departure of the British after Malta’s Independence in 1964, the building served as the office of the Prime Minister until 1972. Since then it has become the seat of various government ministries. The building has also become one of the most recognizable and admired structures in Malta, having also been the subject of one previous commemorative coin in 2008. 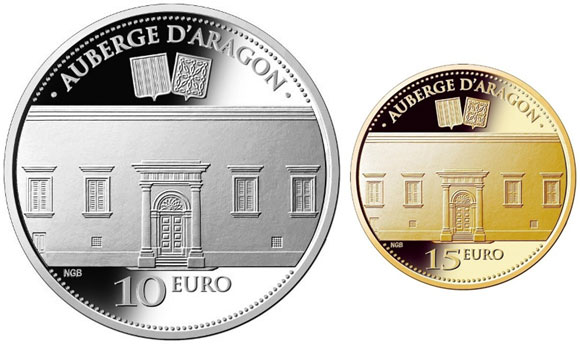 The coins are designed by Maltese Artist Noel Galea Bason and struck by the Royal Mint of Belgium. The obverse of each coin includes the current façade of the Auberge D’Aragon, a simple one story structure – along with two shields of Aragon and Castile above. The denominations of the coins (15 & 10 Euro respectively) appear below the primary design. The reverse includes the shield or Coat of Arms of Malta along with the year of issue, “2014”

The coins are available from the Central Bank directly – from the Malta Coins Distribution Centre at the main building of the Central Bank of Malta, or by completing the order form which can be downloaded from the Bank’s website at: http://www.centralbankmalta.org/site/currency2_aragon.html For more information, please contact the Bank’s Malta Coins Distribution Centre by email on or by calling +356 2550 6006/7/8. Information offered in Maltese and English – international orders dispatched.