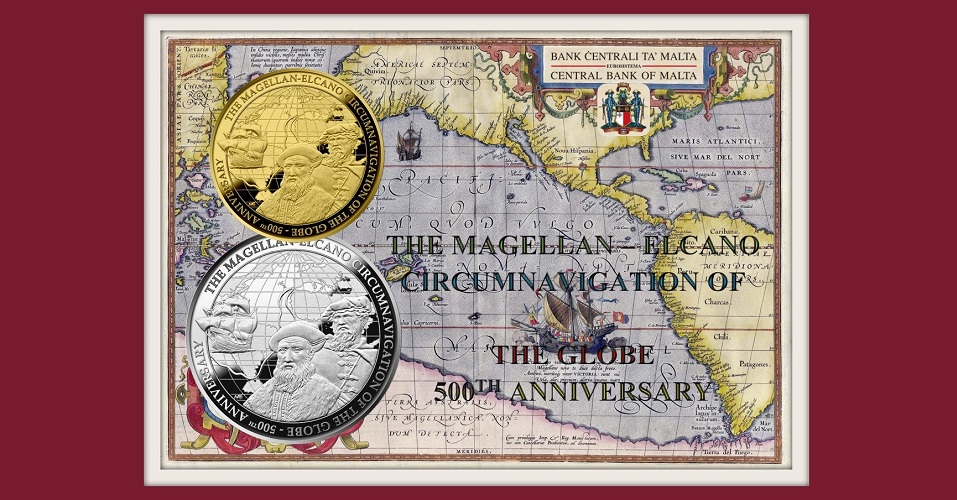 The Central Bank of Malta has released new gold and silver collector coins marking the quincentenary anniversary of the first circumnavigation of the globe which concluded in 1522. The expedition was led by the famed Portuguese navigator Ferdinand Magellan, who was charged with finding a Spanish route to the Moluccas. He was killed on Mactan Island in 1521, but the expedition returned to Spain under the command of Juan Sebastián Elcano (1486/1487–1526). A Castilian navigator of Basque origin, he completed the first circumnavigation of the Earth in the ship Victoria and as part of the expedition to the Spice Islands, part of present-day Indonesia, after Magellan’s untimely death. Begun in September 1519 from the port of Seville, the expedition included five ships and 270 men. Sailing west, the crew crossed the Atlantic Ocean and spent the winter in South America. They then navigated the Straits of Magellan and crossed the vast Pacific Ocean and reached the Philippines. It was here where Magellan was killed as a result of the Battle of Mactan, a fierce clash fought in the archipelago on the 27th April 1521. The outcome of the battle resulted in the departure of the Spanish crew from the archipelago and Elcano taking command of the ship Victoria. Elcano sailed back to Spain, crossing the Indian Ocean, navigating the Cape of Good Hope and north along the west coast of Africa. The circumnavigation was completed by Elcano and the remaining crew of 18 men in Victoria, returning to Spain nearly three years after they left on the 6th September 1522, regarded then as an extraordinary achievement. Upon his return, Elcano received recognition for his success by Emperor Charles V with the coat of arms reading primus circumdedisti me, translated as “You first encircled me.”

The gold and silver coins are produced by the Royal Dutch Mint at their facilities in Houten, Netherlands, on behalf of the Central Bank of Malta. Designed and engraved by Marianna Frisone, the reverse side of the coins depicts representations of the globe and map, as well as images of Portuguese navigator Ferdinand Magellan and Spanish navigator Juan Sebastian del Cano. The image of del Cano is based on a marble statue completed in 1881 by Ricardo Bellver Ramon (1845-1924) and is placed in front of the Town Hall in Getaria, Basque Country. Also shown to the left is a representation of one of the carracks that arrived at Sanlúcar de Barrameda in Spain. A commemorative inscription in English around the primary design reads THE MAGELLAN – ELCANO CIRCUMNAVIGATION OF THE GLOBE – 500TH ANNIVERSARY.

The obverse of the coins features the coat of arms of Malta along with the coin’s denomination of 50 EURO (gold) or 10 EURO (silver), and the year of issue, 2022. The crest is partially surrounded by 12 stars representing the European Union.

Each coin is encapsulated and presented in a custom case branded with the Malta Coin Centre and accompanied by a certificate of authenticity. For additional information please click here for the gold coin and here for the silver coin.