The Central Bank of Malta have issued two coins which honor one of the country’s most well-known and admired composers. Charles Camilleri (1931 – 2009) has long been acknowledged as Malta’s national composer. Born in Hamrun, a town in the Inner Harbour Region of Malta, as a teenager he had already composed a number of works based on folk music and legends. He moved from his early influences of Maltese folk music to a musical form “in which nothing is fixed” and his compositions evolve from themselves “with a sense of fluency and inevitability”. He composed over 100 works for orchestra, chamber ensembles, voice and solo instruments. Camilleri’s work has been performed throughout the world and his research of folk music and improvisation, the influences of the sounds of Africa and Asia, together with the academic study of European music, helped him create a “universal” style.

Camilleri is recognized as one of the major composers of his generation. His works include the now famous Malta Suite, Maltese Dances, A Maltese Overture – Din l-Art Helwa, operas in Maltese, a ballet based on the Knights of Malta and the oratorio Pawlu ta’ Malta. His piano piece Cantilena, is currently part of the Grade 5 Trinity Guildhall piano syllabus. He lived overseas for many years, wrote and composed in Australia, the United Kingdom, Canada and the United States where he composed many of his works. Camilleri died on the 3rd January 2009 at the age of 77. His funeral took place two days later at Naxxar, his long-time town of residence with the flags in Malta flying at half-mast in tribute. 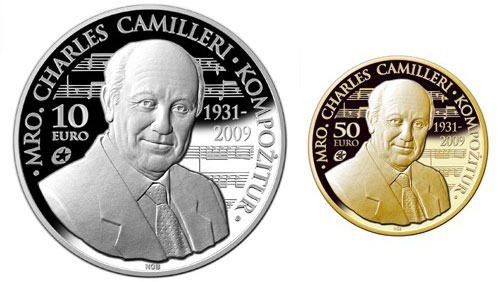 The coins, both struck at the Royal Dutch Mint on behalf of the Central Bank, are designed by Maltese artist Noel Galea Bason. The common obverse includes a front-facing portrait positioned slightly towards the left half along with the text “MRO CHARLES CAMILLERI KOMPOZITUR” along the upper edge. The face value of €10 or €50 is seen just to the left of the portrait as well as the EUROPA star logo. The reverse of both coins includes the Maltese national crest encircled with the 12 EU stars and the year of issue “2014”.

The two coins are issued in conjunction with the annual EUROPA star series – this year’s theme is “European Composers.” The coins may be purchased from the counter of the Malta Coins Distribution Centre at the main building of the Central Bank of Malta in Valletta.

For more information on these and other coins on offer from the Central Bank of Malta’s Coin Distribution Centre, please visit their website at: http://www.centralbankmalta.org/site/currency2_mro_camilleri.html Information is offered in Maltese & English – international orders dispatched.