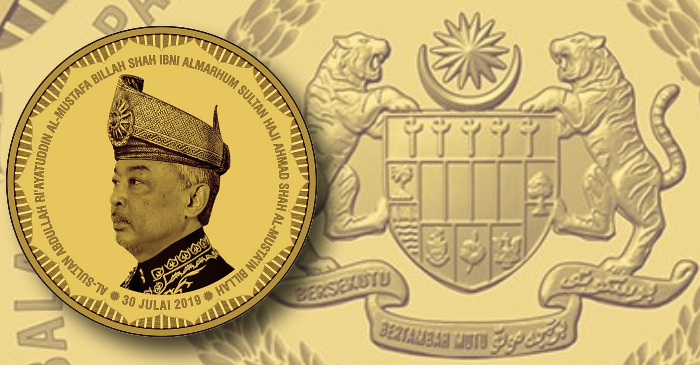 The Bank Negara Malaysia has officially presented (26th July) new collector coins which are in celebration of the investiture of the country’s new king, who ascended the throne on the 31st January. The Malaysian king, now known as His Majesty Seri Paduka Baginda XVI Al-Sultan Abdullah Ri’ayatuddin Al-Mustafa Billah Shah Ibni Almarhum Sultan Haji Ahmad Shah Al-Musta’in Billah, became the 16th Yang di-Pertuan Agong on the 30th January 2019. The election of a monarch in Malaysia is unique in the sense that a special Conference of Rulers will meet and elect the country’s head of state for a term of five years. A candidate is from among the nine constituent members or Sultanates which comprises the Federal Constitutional Monarchy of Malaysia.

The meeting which elected the Sultan of Pahang as the new king was convened on the 24th January, following the announcement by Sultan Muhammad V that he was stepping down as the 15th Yang di-Pertuan Agong, effective the 6th January.

The reverse side depicts the image of the official royal insignia of His Majesty Seri Paduka Baginda Yang di-Pertuan Agong, which is centred. The commemorative inscription, PERTABALAN SERI PADUKA BAGINDA YANG DI-PERTUAN AGONG XVI, is placed above the royal crest, and the name BANK NEGARA MALAYSIA is seen below with the respective face value of the coin. The decorative element of the 14-cornered umbrella pattern is also included around the coin.

Please note: To provide a fair opportunity for members of the public to purchase these limited edition coins, each buyer may only purchase one gold coin, one silver coin as a two-coin set, and up to three Nordic base metal coins. The public may place and pay for their orders online on the 19th August 2019. In the event of oversubscription, a system of balloting will take place. For further information about ordering, payment, and collection of the commemorative coins, please visit the bank’s website (only from the 19th August 2019).