The first silver commemorative from the 1920’s was issued to celebrate the centennial of Maine statehood. This was the second state to issue a commemorative to mark an anniversary and would slowly start a tradition followed by other states in the coming years. Since the coins were generally sold for a premium over face value, it would also provide revenue for the committees appointed with the task of organizing festivities. In the case of the Maine commemorative, the issue price was $1, which was the price most commemorative half dollars would be sold at up until the 1950’s.

Even though the area had been inhabited by Native Americans as early as 3,000 BC, European history of the area that now is the state of Maine started relatively slowly. The first visits to the coast were in the 1520’s, but settlement did not start until the French settled in the first few years of the 17th century. Over the next two centuries settlements remained rare, as most people settled in the more southern part of the area which now comprises of Massachusetts. More widespread settlement of Maine would not come until the late 18th century, when several land lotteries were held. Disputes dominated most of this colonial period, as the border between Canada (in particular the part that was called Acadia by the French, which included parts of modern-day Maine) and the United States had yet to be defined, a conflict which would eventually be decided in the War of 1812, in which Maine suffered heavily.

Part of Massachusetts during English colonial times, Maine became a separate state in 1820 after a referendum where its citizens voted in favor of doing so, and as a result the state was officially created by the Missouri Compromise. The state would enter the Union as a free state while Missouri was subsequently allowed as a slave state. Maine became the 23rd State to join to Union and had become the easternmost and most northern state until Alaska joined in 1959. 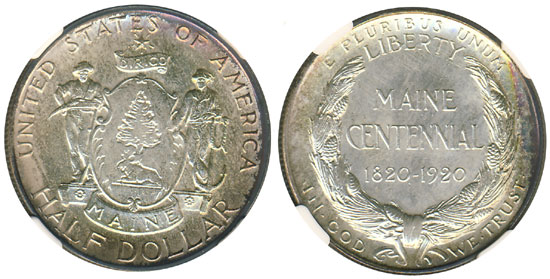 The design of the Maine commemorative half dollar is relatively simple, copying the state seal on the obverse and a wreath of pine branches with the text MAINE CENTENNIAL 1820-1920 on the reverse. Unlike the Illinois Commemorative discussed previously, the state seal was virtually copied from the original with only a minor modification. 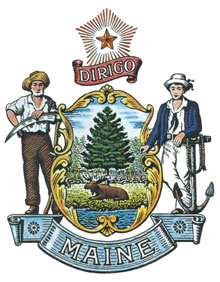 The seal focuses on Maine’s connection to the ocean, the woods and the people that have called this easternmost area of the country their own. The central part of the seal features a pine tree, with the northern star above it. Also seen is the Latin word “Dirigo”, which translates to “I lead”. The motto is said to originate from the early presidential elections after Maine had become a state. At the time Maine would vote in September instead of the usual November, in order to have more people be able to vote. With extremely hard winters almost customary in Maine, fewer people were expected to be able to travel for elections in times when railroad transport was virtually non-existent in this corner of the American continent.

Going back to more modern times, the centennial year of 1920 saw festivities throughout the state but especially in the cities of Portland (biggest city of the state) and Augusta (capital of the state since 1832). In May of 1920 legislation introduced in Congress by House member John A. Peters of Maine was passed to issue a commemorative half dollar for the occasion, which would become the first commemorative half dollar since the one issued in 1918 for the centennial of Illinois statehood.  The maximum authorized mintage was 100,000 pieces, a number which would not be reached, as the final mintage and number of pieces distributed was just over 50,000.

Early on, the design of the Maine Half Dollar attracted a lot of criticism. Maine artist Harry Cochrane submitted sketches of the design, which were opposed by James Earle Fraser, most well-known for his design of the Buffalo Nickel introduced in 1913. Opposing the new design as much Charles Moore (chairman of the Commission of Fine Arts), both requested that new sketches were to be made. In letters between the Maine Centennial Commission and the Commission of Fine Arts (of which Fraser was a member) both expressed their dissatisfaction with the design, comparing it to the unpopular Barber coinage of the late 19th century. Ultimately a compromise was reached and Cochrane’s sketches were modeled by Anthony De Frncisci, a student of Fraser who would later design the Peace Silver Dollar.

Production would soon commence, but the coins would not be seen until most of the centennial festivities had already ended. This was contrary to the reasons that the coin was created in the first place, as it was thought that circulation of the coin would increase interest (and revenue) for the festivities. Yet, even though that was no longer possible because of the timing, this is a coin that was one of the more circulated centennial half dollars. Q. David Bowers estimated in his Guide Book of Commemorative Coins that as few as 5,000 pieces were actually bought by collectors. Another 30,000 coins were sold to people merely interested in the occasion (mostly Maine residents) while the remaining number of pieces were slowly distributed over the next couple of years.

Because of the large quantity of pieces that were bought by the non-collecting public many pieces show light friction on the high points, with gem uncirculated pieces being very scarce. Over time, the issue has increased a little bit in popularity but it remains one of the more underrated silver commemoratives, especially in grades higher than MS-65.