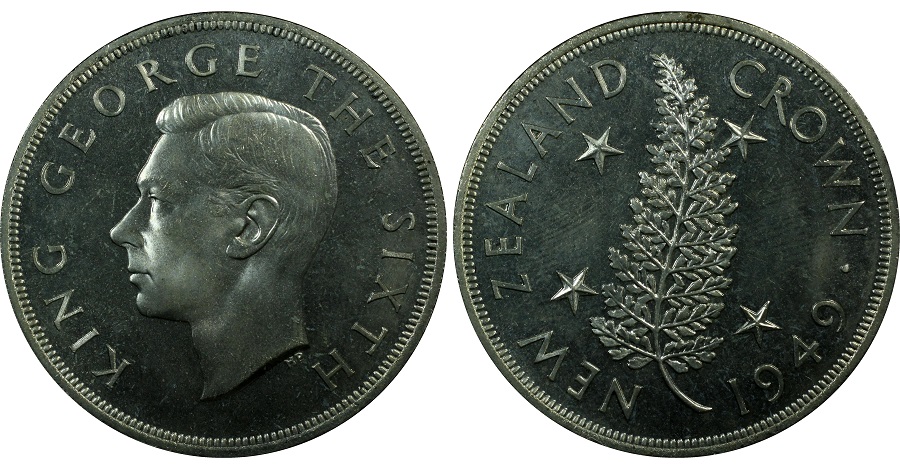 (January 18, 2020) — A collection of rare and popular New Zealand coins certified by the Professional Coin Grading Service (PCGS) is turning heads at the New York International Numismatic Convention (NYINC) this week, where it will be offered for sale by Stack’s Bowers Galleries on January 18, 2020. The Fenton Collection, named for renowned Australian PCGS Set Registry Member George Fenton, contains a wide variety of rare New Zealand coinage dating back to 1933, when the first official coins were struck for the British Commonwealth nation.

Among the highlights is a 1949 Royal Visit crown graded Proof-66 by PCGS. This coin, just one of three specimens known and housed in a PCGS Gold Shield holder, is tied with only one other example at that grade for finest-known. The coins were struck to honor King George VI’s trip to New Zealand, which was canceled due to health issues. The last time an example of this rarity was known to have appeared at auction was in 2015, when it realized $18,000.

Another outstanding piece is a 1936 King George V florin, graded PCGS MS-66. The single finest-known example of its kind and exhibiting exceptional strike and satiny surfaces, this 1936 florin is fit to serve as a crown jewel in any top-caliber PCGS Set Registry of coinage from New Zealand.

“The collection was originally assembled in the 1980s by noted Australian collector Chris Meilon and sold in its entirety to another famous Australian collector, Wayne Borg,” Scott Waterman, director of Australia’s Imperial Coins, explains of the set’s provenance. “Wayne is really relevant in the Australian PCGS grading world, as it was his collection sold in 2011 that sparked the rapid growth and acceptance of PCGS and the PCGS Set Registry in Australian coins. Many of the prices realized in that sale still stand as the record price for numerous key-date Australian coins.” He adds, “it was our belief the coins would realize stronger prices at auction in fresh PCGS Gold Shield holders, and it also gave us a chance to have the collection named and photographed with PCGS TrueView, which has a very cool effect on the complete collection.”

PCGS President Brett Charville says certifying the prestigious Fenton Collection represents the strong commitment his firm has to serving as the globe’s leading third-party numismatic grading firm. “We at PCGS are excited to have had the opportunity to certify the rare and exquisite coins of the Fenton Collection. We look forward to expanding our reach ever further to offer collectors of coins from Australia, New Zealand, and other nations from around the world our full suite of world-class grading services,” he remarks. “We also will continue providing many new and exciting avenues for those in the global numismatic community to build their collections and compete with fellow numismatists on the PCGS Set Registry.”

Professional Coin Grading Service (PCGS) is a third-party coin and banknote grading company that was launched in 1986. Over nearly 35 years, PCGS has examined and certified some 42.5 million U.S. and world coins, medals, and tokens with a combined value of more than $36 billion. For more information about PCGS products and services, including how to submit your coins for authentication and grading, please visit the website of PCGS or call PCGS Customer Service at (800) 447-8848.