The Royal Mint has issued the precious metal versions of the commemorative coins celebrating the 800th anniversary of the signing of the Magna Carta or, Great Charter. The charter was issued by King John of England signed at Runnymede, near Windsor, on the 15th June 1215 and drafted by the Archbishop of Canterbury to make peace between the unpopular King and a group of rebel barons. It promised the protection of church rights, protection for the barons from illegal imprisonment, access to swift justice and limitations on feudal payments to the Crown which was to be implemented through a council of 25 barons. The charter is considered a pre-cursor to many nation’s constitutions as it was meant to guarantee the right of law and to limit the power of a single entity or person to rule alone and without the consent of the populace or representation. 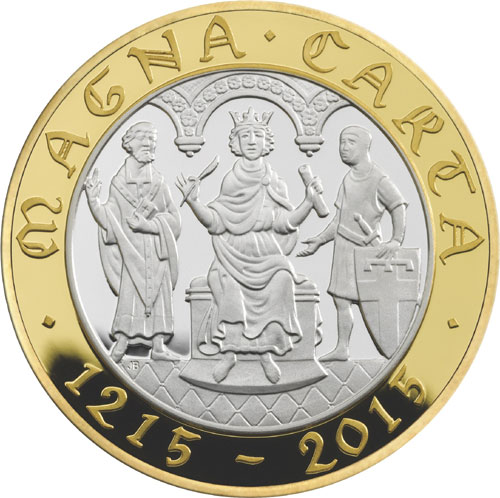 The Magna Carta is a charter of freedoms that survives in part in British law today, and is recognized as one of the cornerstones of human liberty worldwide. It originated as an unsuccessful attempt to achieve peace between royalist and rebel factions in 1215, as part of the events leading to the outbreak of the First Barons’ War, a civil war in the Kingdom of England in which a group of rebellious barons, and supported by a French army under guidance of the future Louis VIII of France, made war on King John of England, the third of the Angevin dynasty kings. Although the kingdom had a robust administrative system, the nature of government under the Angevin monarchs was ill-defined and uncertain.

The King and his predecessors had ruled using the principle of vis et voluntas, or “force and will”, taking executive and sometimes arbitrary decisions, often justified on the basis that the king was above the law. Many contemporary writers believed that monarchs should rule in accordance with the custom and the law, with the counsel of the leading members of the realm, but there was no model for what should happen if a king refused to do so.

John met the rebel leaders at Runnymede, near both the royal fortress of Windsor Castle and the rebel base at Staines, on the 10th June 1215, where they presented him with their draft demands for reform, the “Articles of the Barons”. A few years later, this agreement was renamed Magna Carta, meaning “Great Charter” and by the 15th June, general agreement had been made on a text. On the 19th June, the rebels renewed their oaths of loyalty to John and copies of the charter were formally issued. 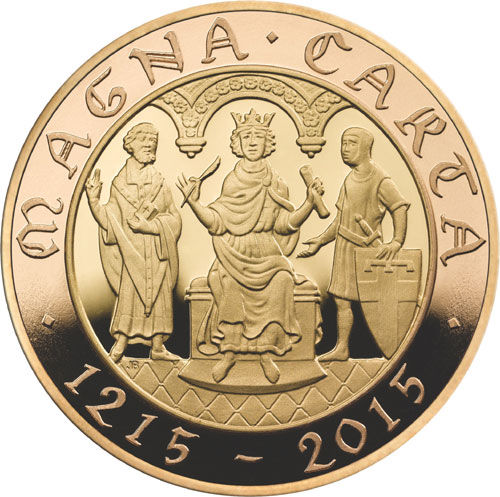 The coin design, by experienced coinage artist John Bergdahl features a depiction of King John with a bishop and a baron on either side. The inscription uses a medieval-style font that surrounds the design as the inscription on King John’s royal seal did in the Middle Ages. The coins include the fifth portrait of Her Majesty Queen Elizabeth II on its obverse as designed by Royal Mint engraver Jody Clark and introduced in March of this year.

The base metal versions, issued earlier this year include the fourth portrait of HM Queen Elizabeth II designed by sculptor Ian Rank-Broadley and as such, the effigy on precious metal versions includes a different portrait. A 2015 dated precious metal proof commemorative coin collection issued in January and including the Magna Carta coin also includes the Rank-Broadley portrait. The public can expect to see the circulating version of the design later this year.

For more information on the 800th Anniversary Magna Carta commemorative coins offered by the Royal Mint, please visit this section of their website. Information offered in English, international orders dispatched.