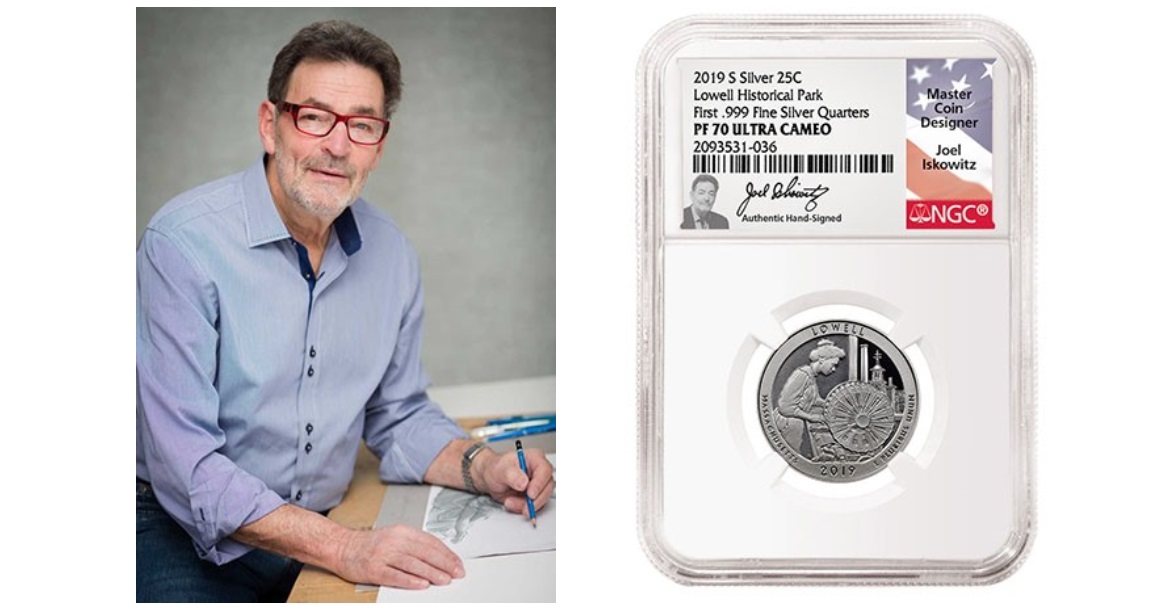 Joel Iskowitz designed the reverse of the 2019 Lowell Historical Park America the Beautiful quarter, among many others. Iskowitz signs certification labels for NGC. Images by Numismatic Guaranty Corporation. Hover to zoom.

The Numismatist article showcases an artist who has shaped modern U.S. coinage.

The June 2020 edition of The Numismatist includes a six-page feature article about Joel Iskowitz, an artist whose designs have been selected for dozens of U.S. coins and medals. Starting in 2017, Iskowitz has exclusively hand-signed certification labels for Numismatic Guaranty Corporation (NGC).

The article in The Numismatist, the monthly magazine of the American Numismatic Association (ANA), explores Iskowitz’s trajectory as an artist, starting in the 1960s at an arts high school in New York City. In 2005, he was accepted by the U.S. Mint’s Artistic Infusion Program, which seeks out innovative talent for designing coinage.

In the article, Iskowitz describes himself as “just an ordinary guy from the Bronx, with an extraordinary passion for history and art.”

Iskowitz’s designs have appeared on series such as the American Platinum Eagle, Presidential dollars, First Spouses and America the Beautiful quarters. He has also designed Congressional Gold Medals and commemorative coins, including the 2015 U.S. Marshals Service half dollar. Among his most famous designs is the reverse for the 2009 Lincoln cent that paid tribute to Abraham Lincoln’s professional life in Springfield, Illinois, before he became president.

NGC, which serves as the official grading service of the ANA, contributes a monthly Counterfeit Detection column to The Numismatist.