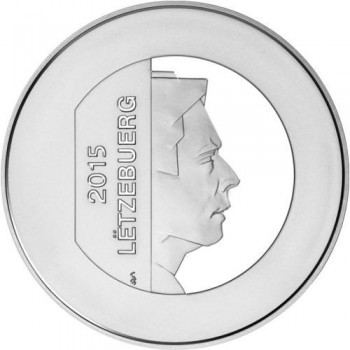 The Banque Centrale de Luxembourg has announced the issue of a new coin celebrating the bicentenary anniversary of the Congress of Vienna, an accord that established the Grand Duchy of Luxenbourg as a separate geopolitical entity in association with the Kingdom of the Netherlands.

The Congress of Vienna, which opened in September 1814, was called by European leaders as an after-effect of the French Revolution, just prior to Napoleon’s downfall at the battle of Waterloo in June 1815. The Congress sought to re-draw boundary lines, reinstate previous boundaries, and decrease or re-size belligerent powers in an effort to restore balance and lessen the likelihood of future all-out wars or confrontations.

The former Spanish Netherlands and the Austrian Netherlands—now the Kingdom of Belgium—were united as a constitutional monarchy just months before the Congress was called. Willem, Prince of Orange of the House of Orange-Nassau, was named as its head of state under the title, Willem I of the Netherlands.

To compensate for the Orange-Nassau’s loss of their Nassau lands to the Kingdom of Prussia, the United Kingdom of the Netherlands and the historic lands of Luxembourg were granted the status of a Grand Duchy, forming a personal union under the House of Orange-Nassau that allowed Luxembourg (but not the Netherlands) to remain part of the German Confederation. This union would last until the death of HM King Willem III in 1890.

King Willem did not have a male heir and was succeeded by his ten-year-old daughter, Queen Wilhelmina. The Grand Duchy did not allow for the accession of a female sovereign; as a result, it broke off from the Netherlands, becoming an independent country with Adolphe, Duke of Nassau and distant cousin of King Willem III, as its new head of state. Adolphe died and was succeeded by his only surviving son, Guillaume IV, Grand Duke of Luxembourg. The present-day ducal family descend from Adolphe, with the current Grand Duke Henri being Luxembourg’s sixth consecutive head of state since its initial separation from the Netherlands in 1890. Grand Duke Henri succeeded to the Luxembourgish throne after the abdication of his father, Grand Duke Jean, in 2000. 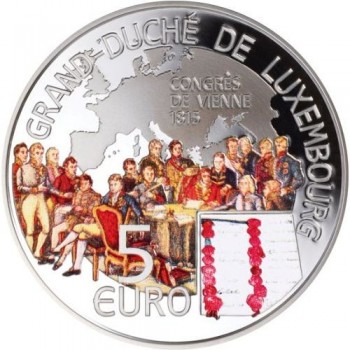 The coin, produced by the Austrian Mint on behalf of the Banque Centrale, includes a depiction of the Congress of Vienna that features many of the era’s most recognizable historic figures; also pictured is the document treaty with the signatories’ seals in red. A map of Europe is seen in the background. The coin’s denomination of 5 Euro is placed at the lower left of the coin. The obverse, designed by artist Yvette Gastauer-Claire, includes a stylized profile portrait of HRH Henri of Luxembourg facing to the right. LETZEBUERG and the year of issue, 2015, are placed just to the left of the portrait in a vertical direction.

The coin comes packaged in a colorful presentation folder and is available directly from the Banque Centrale Du Luxembourg, with orders currently being taken for dispatch on July 31. For more information on this and other coins issued by the Banque Centrale, please visit their website. Information is offered in English, German and French, with international orders dispatched where applicable.