Within the modern commemorative coin era from 1982 to present, the most frequently used denomination has been the silver dollar. Over the course of the past three decades, there have been 65 different modern commemorative silver dollars issued. If different mint marks and the separate proof or uncirculated finishes are considered, the total number rises to 134 coins.

While the vast majority of these coins are relatively available and can be acquired at modest prices, a small number of issues experienced significantly lower mintages. These low mintage coins are often the focus of collectors since they are generally the most difficult coins to track down and carry the highest premiums.

The first modern commemorative silver dollars were the 1983 and 1984 Olympic Silver Dollars. These coins were issued to celebrate the 1984 Olympic Games held in Los Angeles, California. The two coins were struck in uncirculated version with the “P”, “D”, and “S” mint marks and in proof version with the “S” mint mark. Across both issues, the maximum authorized mintage was the now unfathomably high figure of 50,000,000 pieces. Across the various versions, final mintages ranged from a low of 116,675 for the 1984-D & S uncirculated coins to a high of 1,801,210 for the 1984 proof coin.

The subsequently issued 1986 Proof Statue of Liberty Silver Dollar would experience the highest mintage of the range at 6,414,638 pieces. This issue had captured the attention of the broader public since it commemorated the 100th anniversary of the Statue of Liberty and helped to raise funds for its restoration.

With a few exceptions for more popular subjects, over the coming decade, mintage levels for the silver dollars would follow a general trend lower. As with modern commemorative gold coins, this trend would culminate with the outpouring of issues which occurred from 1995 to 1996. 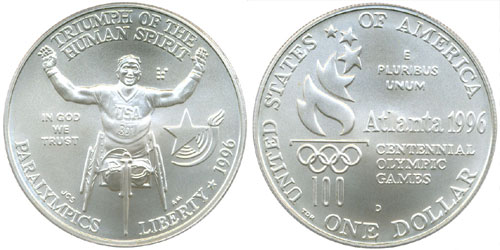 During these two years, the United States Mint would offer a sixteen coin program for the Atlanta Centennial Olympics, which included eight silver dollars in proof and uncirculated versions. In addition, there would be silver dollars issued under four other separate programs for the Civil War Battlefields, Special Olympics, National Community Service, and the Smithsonian Institution.

This massive large number of new issues forced some collectors to be more selective with their purchases, or in some cases abandon the pursuit of commemorative coins altogether. When the dust settled, a number of coins from this time frame ended up with extremely low mintages due to lackluster sales. Congress would respond to the situation by passing the Commemorative Coin Reform Act of 1996, which would impose a limit of only two commemorative coin programs per year going forward. 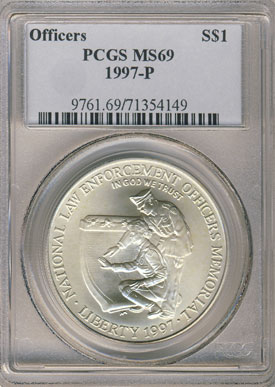 The current list of the ten lowest modern commemorative silver dollars is dominated by the issues from 1995 to 1996, which occupy eight out of the ten positions. The single lowest mintage coin occurs for the 1996-D Paralympics Silver Dollar at a mere 14,497 pieces. This is closely followed by the three other uncirculated versions of the 1996 silver dollars issued for the Olympic Games.

Three of the uncirculated versions of the 1995 silver dollars issued for the Olympic Games also occupy the list, along with the Community Service Silver Dollar issued in 1996. The list is completed by the 1997-P Law Enforcement Silver Dollar and 2000-P Leif Ericson Silver Dollar.

There have been no changes to the list of the ten lowest mintage modern commemorative silver dollars in more than a decade. With the number of programs limited to only two, and the cost of the coins remaining relatively affordable to most collectors, sales levels and corresponding mintages have remained at higher levels. Unless there is a significant change in the structure of commemorative coin programs, collecting habits, or the price of silver, the current list may remain unchanged for a long time to come.