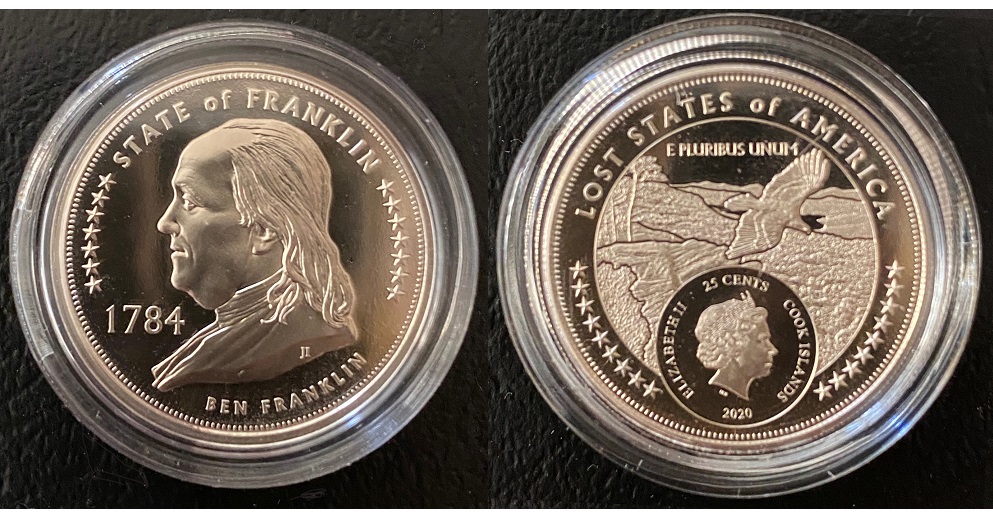 Joel Iskowitz is a prolific portrait painter and coin, stamp, and medal designer from New York, who has designed 54 coins and medals for the U.S. Mint and many others for other world and private mints. He was a member of the U.S. Mint’s Artistic Infusion Program from 2005 to 2018 and his coin designs are widely admired by collectors. His work has received many awards, including Coin of the Year awards, and he has also worked in other artistic media such as printmaking and illustrating.

Joel sees himself as a narrative artist who tells important stories with imagery. In a recent article for The Clarion, the journal of the Pennsylvania Association of Numismatists, on his presentation last year in China on “Goddesses without Borders” he noted that he sees coins and medals as “miniature ambassadors which carry the content of history and culture around the globe and therefore are very effective in creating mutual understanding, respect, and goodwill among peoples.”

Joel’s approach to his work always involves extensive study of the subject matter he will be depicting, which frequently includes traveling to particular locations to see them in person such as the various national parks he depicted for the America the Beautiful series and designs for the state and territory quarter series.

He recently had his first solo exhibit — a tribute to the stunning works of art produced during his long career as an artist — some of which were previously exhibited at the White House, U.S. Capitol building, Pentagon, NASA, and various museums, among other venues. The new exhibit, which is called “Icons of Inspiration,” was organized by Martha Jasopersaud at the invitation of Joan Walton for the Atlantic Gallery in New York. It can be viewed online in this YouTube video:

Joel noted of this large collection of paintings and various images of some of his many medallic and numismatic works with an emphasis on great figures from history such as Einstein, John Glenn, and Frederick Douglass:

Over the course of a fortunately long career, I have had the privilege and honor of being tasked with researching and developing images that speak to history’s most compelling adventures and chapters, focusing on the notables that shaped them.

Intergovernmental commissions in the philatelic realm, reportage paintings for the United States Air Force Art Program, and NASA, many national and private sector mints, including our own U.S. Mint, have afforded me the opportunity to pay homage to these luminaries who have blazed a path for us all.

His most recent coin project seems like a natural fit with Joel’s lifelong interest in American history. It is a set of coins issued for the Cook Islands that focuses on the “Lost States” of America, which are former states that no longer exist as well as proposed states that never came to be. Some are areas that tried to secede from the Union but failed or did so but only for a brief period. Others are extra-legal, unrecognized territories that tried to become states but did not succeed.

This new series is designed to complement the U.S. Mint’s state and territory quarter series that ran from 1998 to 2009.

Four new designs are being issued this year with another 16 coming from 2021 to 2024 at the rate of four per year. They will be issued as a set of quarter dollars sold along with a copy of the book, Lost States: True Stories of Texlahoma, Transylvania, and Other States That Never Made It by Michael J. Trinklein (Quirk Books, 2010) — a 160-page examination of the more than 100 proposals for states that never came to pass.

The 20 designs of lost states for this series will also appear on $1, one-ounce silver, high-relief Proof coins that use Coin Invest Trust’s Smartminting technology that creates lifelike detail.

The reverse of each features a miniature effigy of Queen Elizabeth II by Ian Rank-Broadley that appears on all Cook Islands coins. Surrounding the effigy are the name of the monarch, denomination, issuing country, and year of issue. Above the central reverse artwork on each piece are inscriptions for “Lost States of America” and “E Pluribus Unum.”

Each obverse features a portrait of the individual who led the effort for a proposed state, or for whom it was named, with his name inscribed below, the name of the state above and to the left of the figure is the year the state began or was proposed.

For 2020 the coins to be issued are those for the lost states of McDonald, Franklin, Deseret, and Jacinto. The design of both sides of each coin is the work of Joel, and each reflects his meticulous attention to detail and extensive experience creating portraits and other coin motifs. 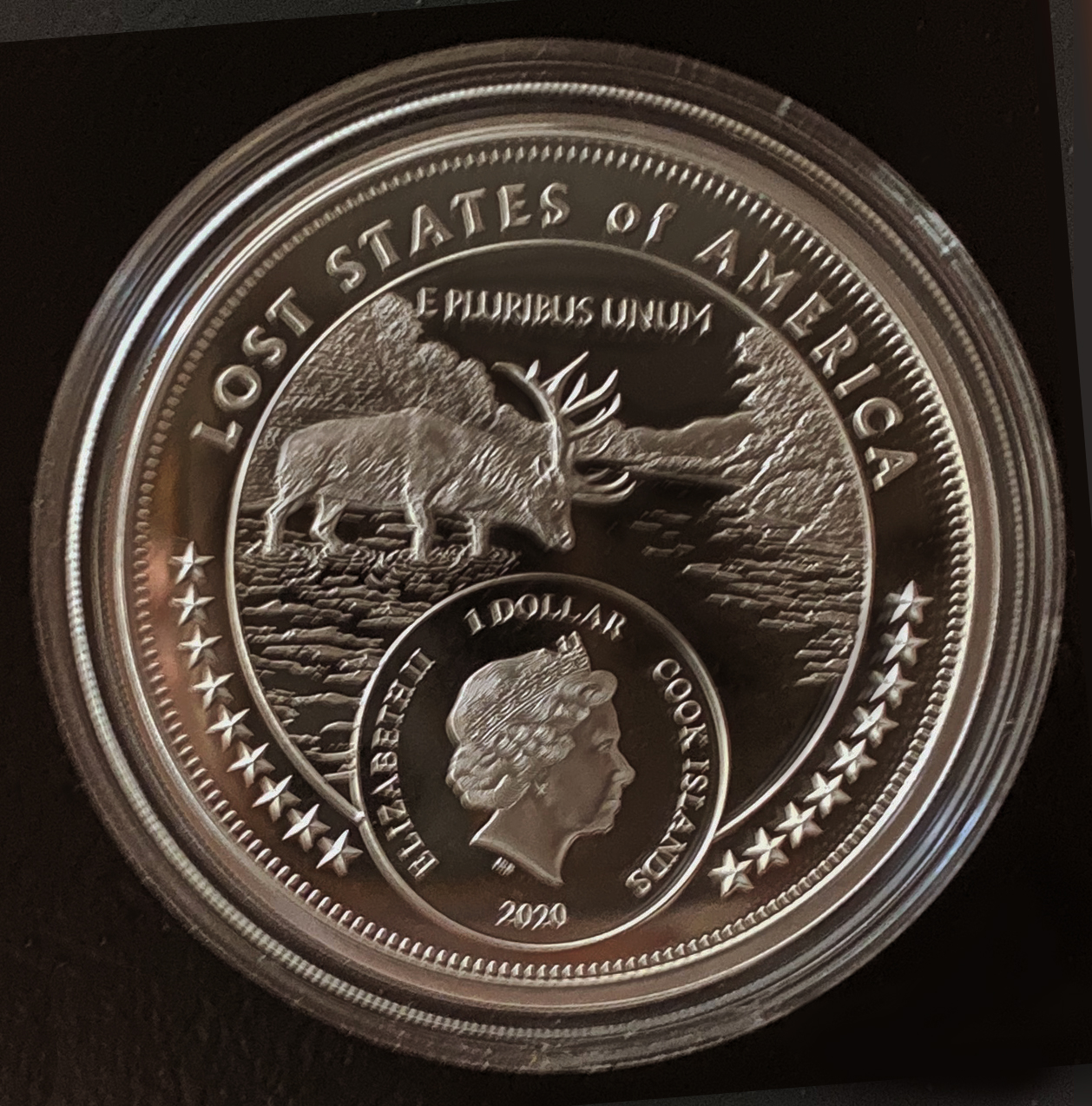 The state of McDonald was an unrecognized territory with its own provisional government that existed briefly in 1961, when what is now McDonald County, Missouri (named after Sergeant Alexander McDonald, who served in the Revolutionary War) attempted to secede from the state. It also included parts of Arkansas and Oklahoma. The impetus for this attempted secession was the omission of popular resort town Noel, Missouri, from maps printed in 1961, which led the residents in McDonald County to become concerned about how that would impact their livelihoods. It was never recognized by the state of Missouri of the U.S. Congress. 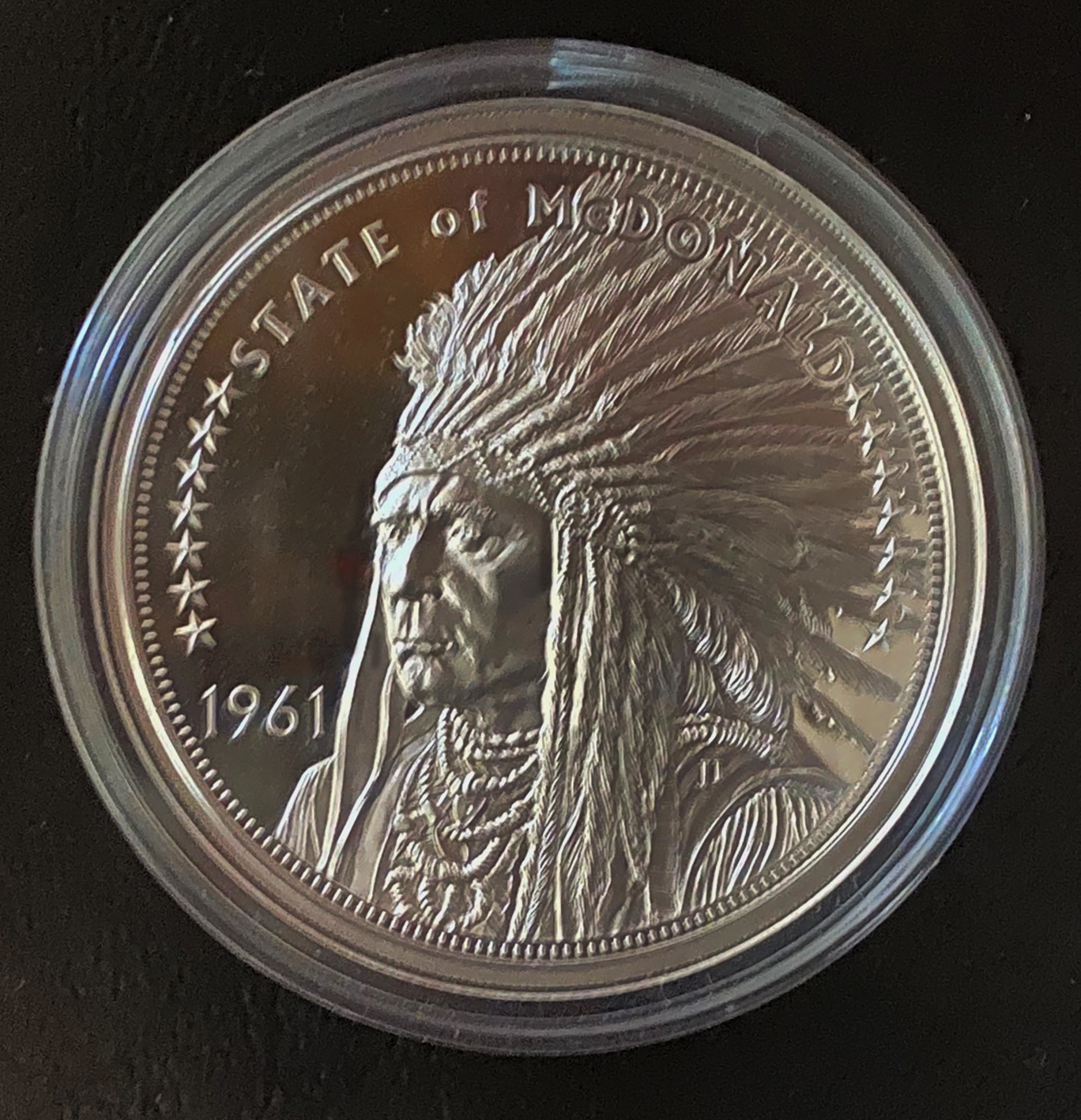 The obverse of this coin features a profile of a Native American chieftain with full headdress, while the reverse features an elk wandering amid nature. 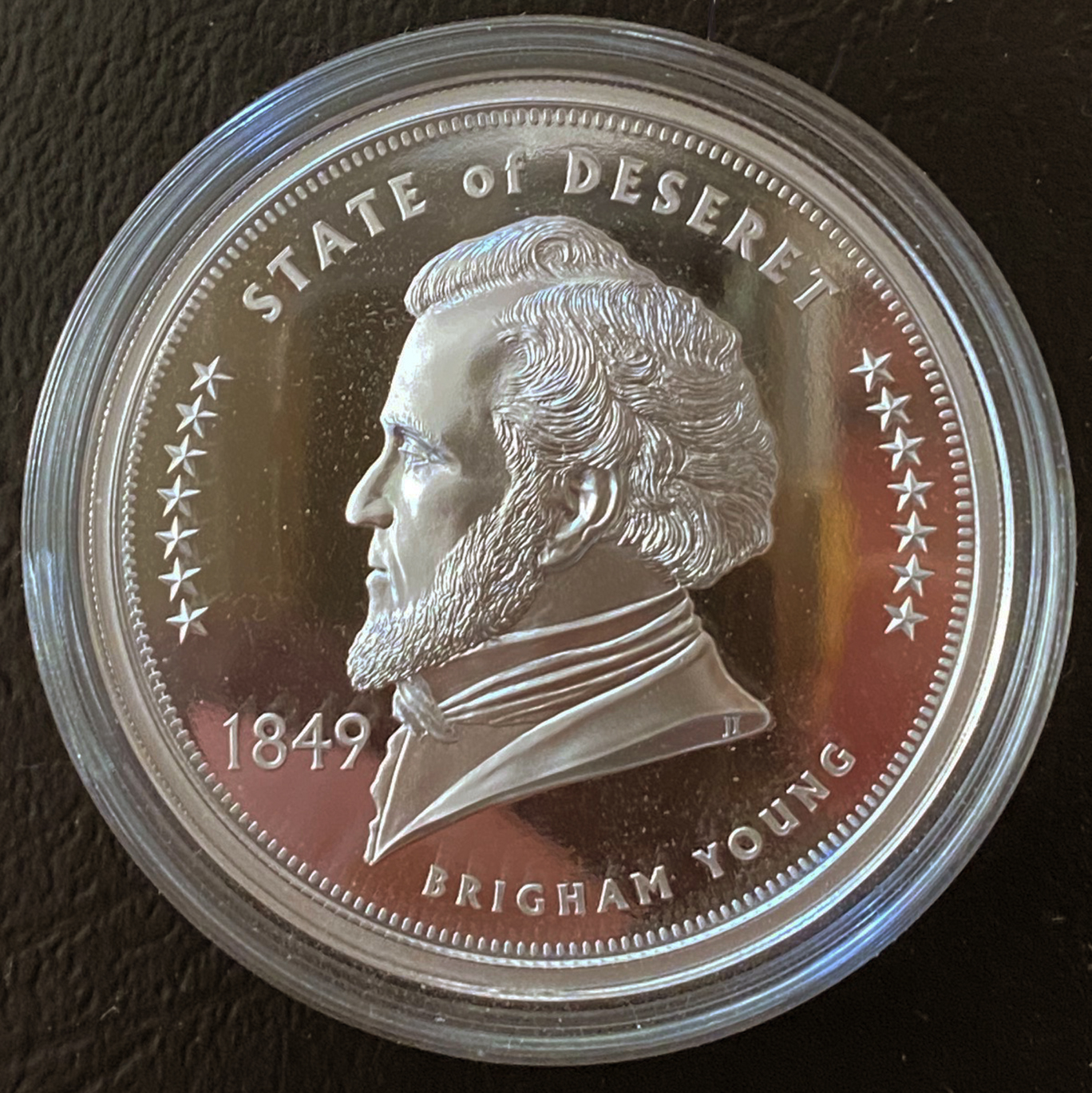 Deseret was a provisional state that existed for two years from 1849 to 1850 created by the settlers of the Church of Jesus Christ of Latter-Day Saints (aka the Mormon Church) in Salt Lake City led by Brigham Young (who is shown on the obverse) that encompassed nearly all of present-day Utah and Nevada, large portions of California and Arizona, and parts of Colorado, New Mexico, Wyoming, Idaho, and Oregon. 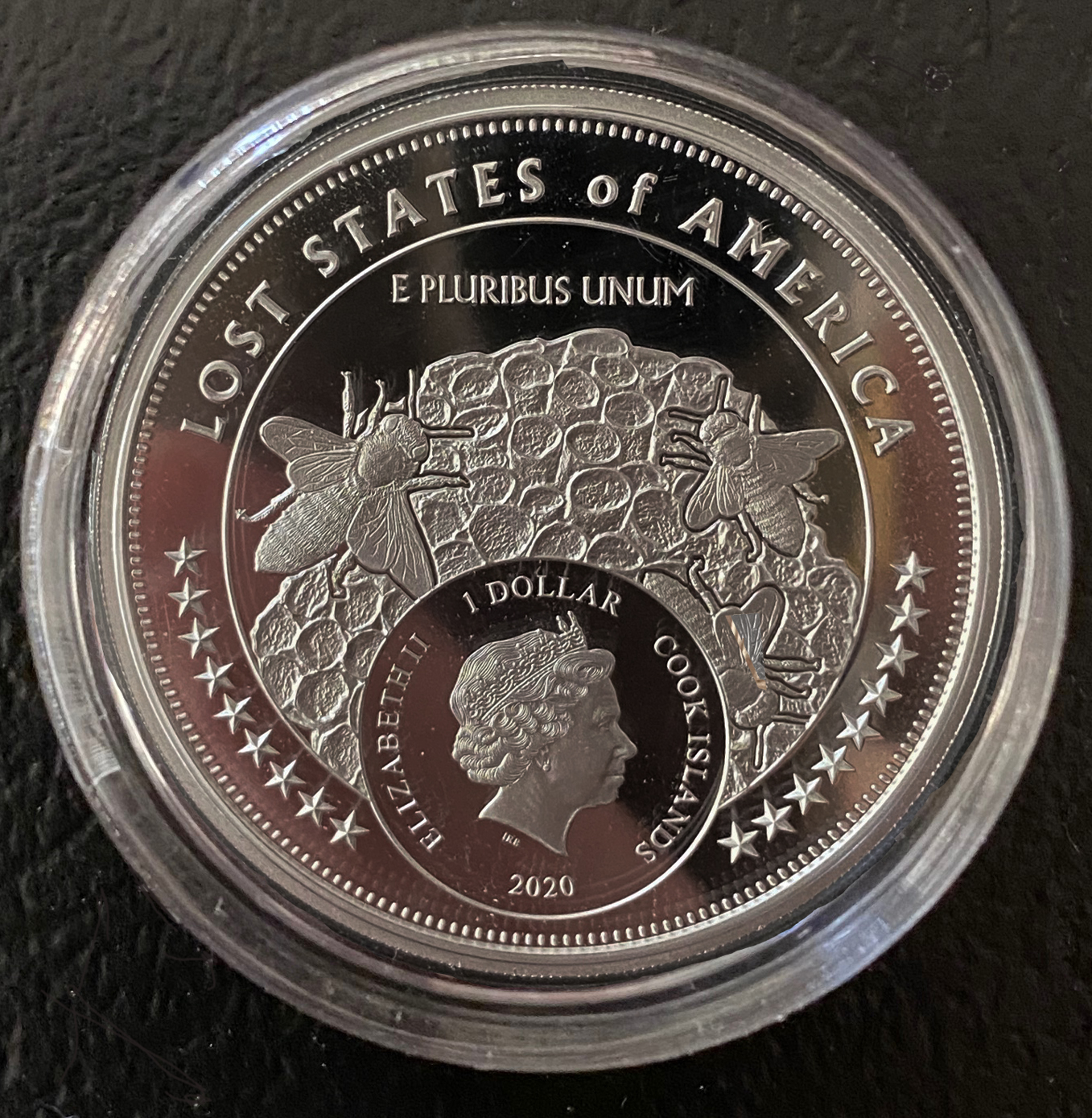 Young initially applied for this area to be a territory, but after he learned that California and New Mexico were applying for statehood, he did the same. There was a proposal in 1849 by President Zachary Taylor to combine California and Desert into a single state, but some opposed the large size of the area, while others saw it as an attempt to create a Mormon theocracy. Instead, in 1850 Utah was created by the Compromise of 1850, and Young became its first governor. 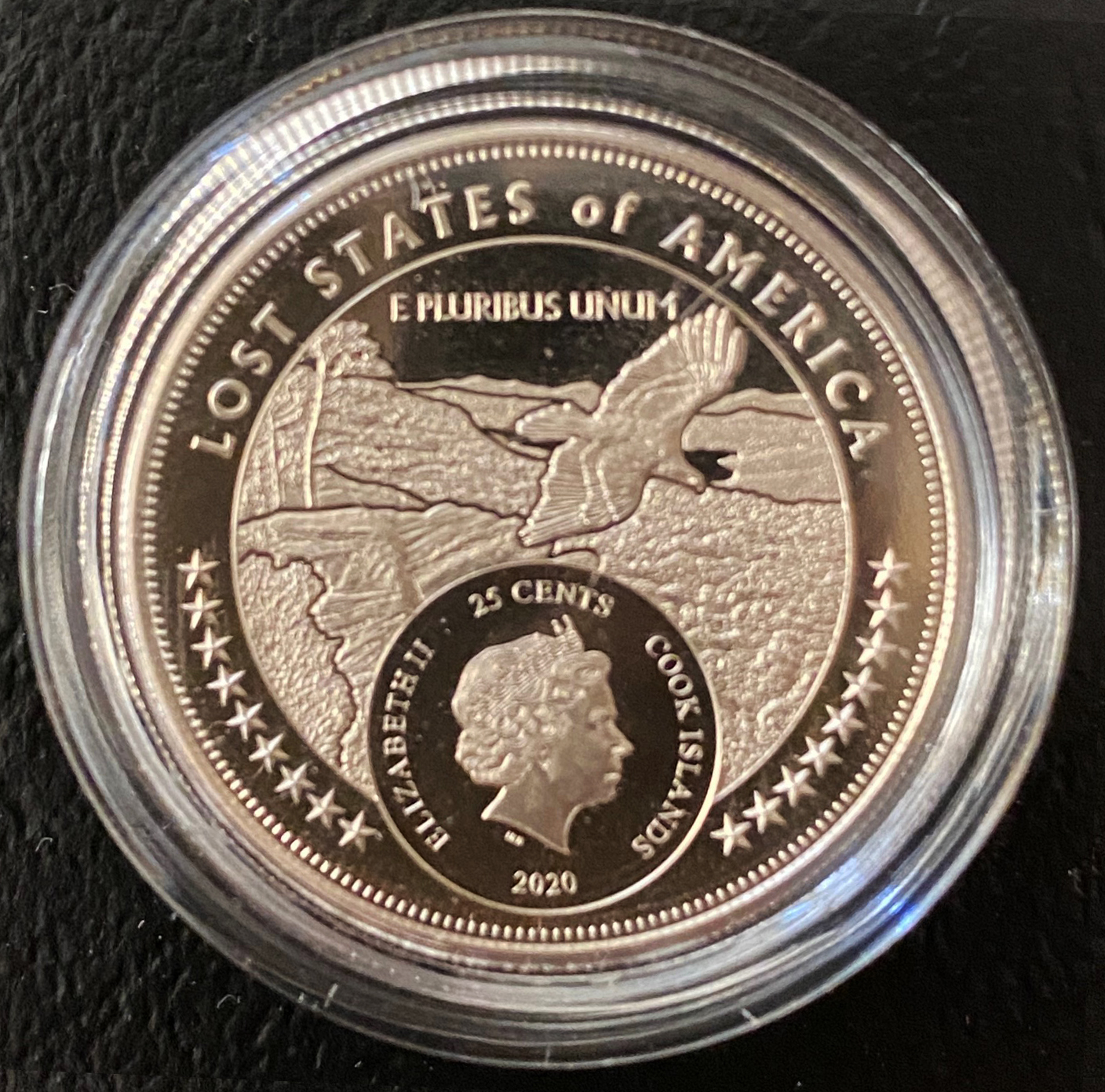 The state of Franklin (or Frankland) was an unrecognized territory created in 1784 in Eastern Tennessee from land that North Carolina had offered to the Congress as a cession to help pay off debts from the War of Independence. The land in question was mostly the property of the Cherokee and Muskogee Native American tribes. In 1789 North Carolina resumed control of this area after an insufficient number of states voted to admit Franklin to the Union. 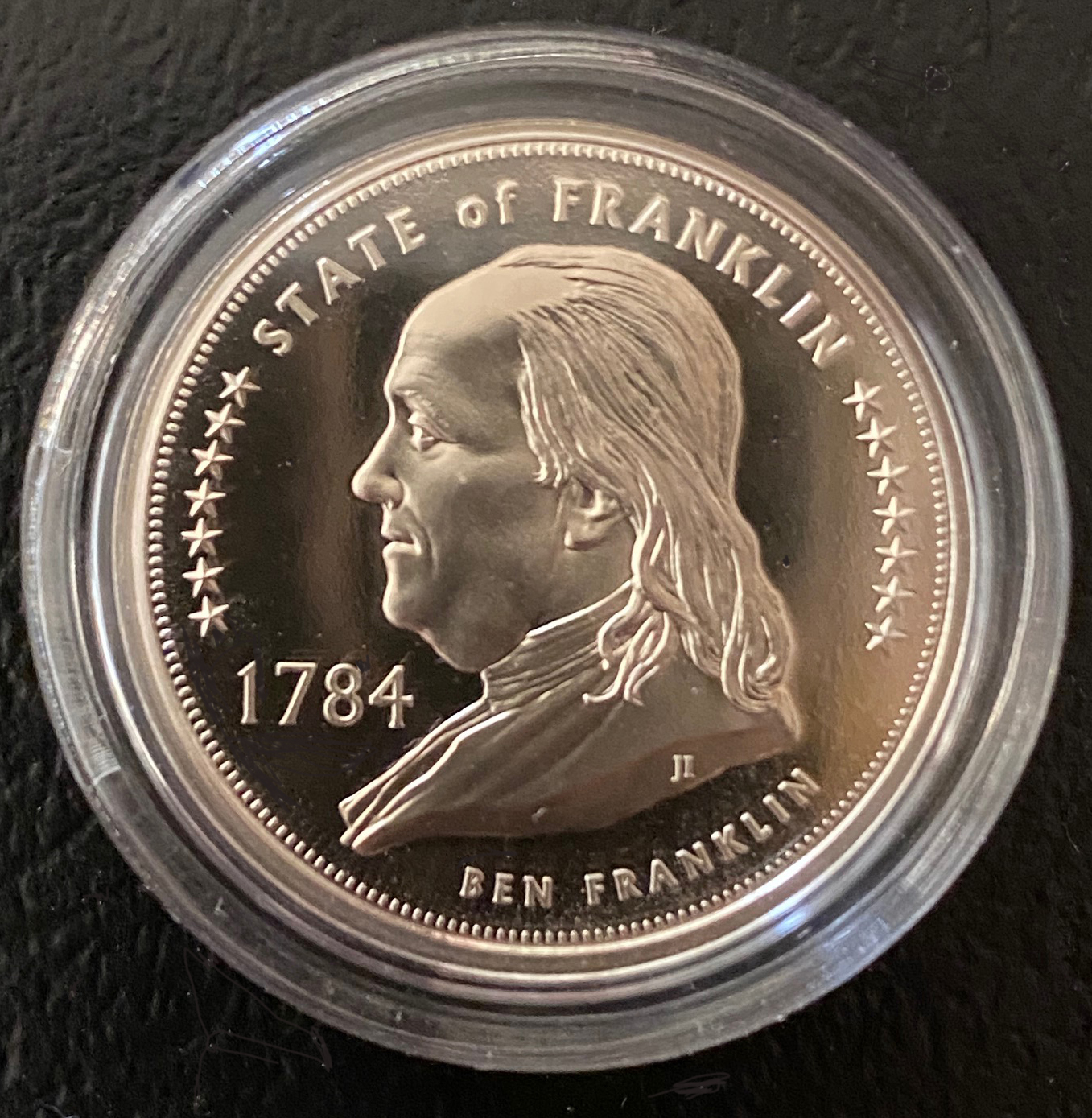 The name was an attempt to gain the support of founding father Benjamin Franklin, depicted on the obverse for this issue, who offered no public backing for it. 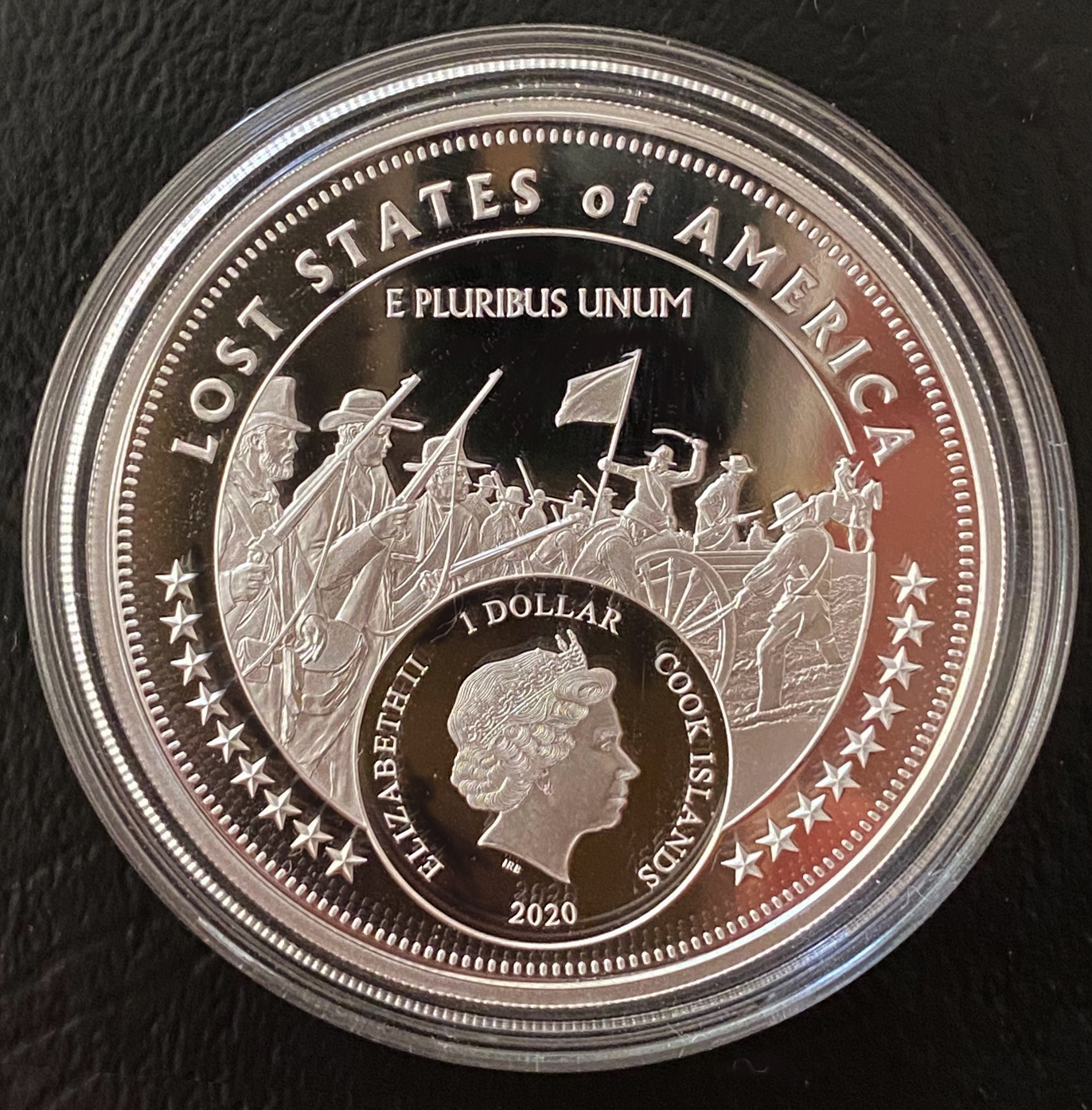 The state of Jacinto, which would have started at the Brazos river and gone to the eastern part of present-day Texas, never came to be. 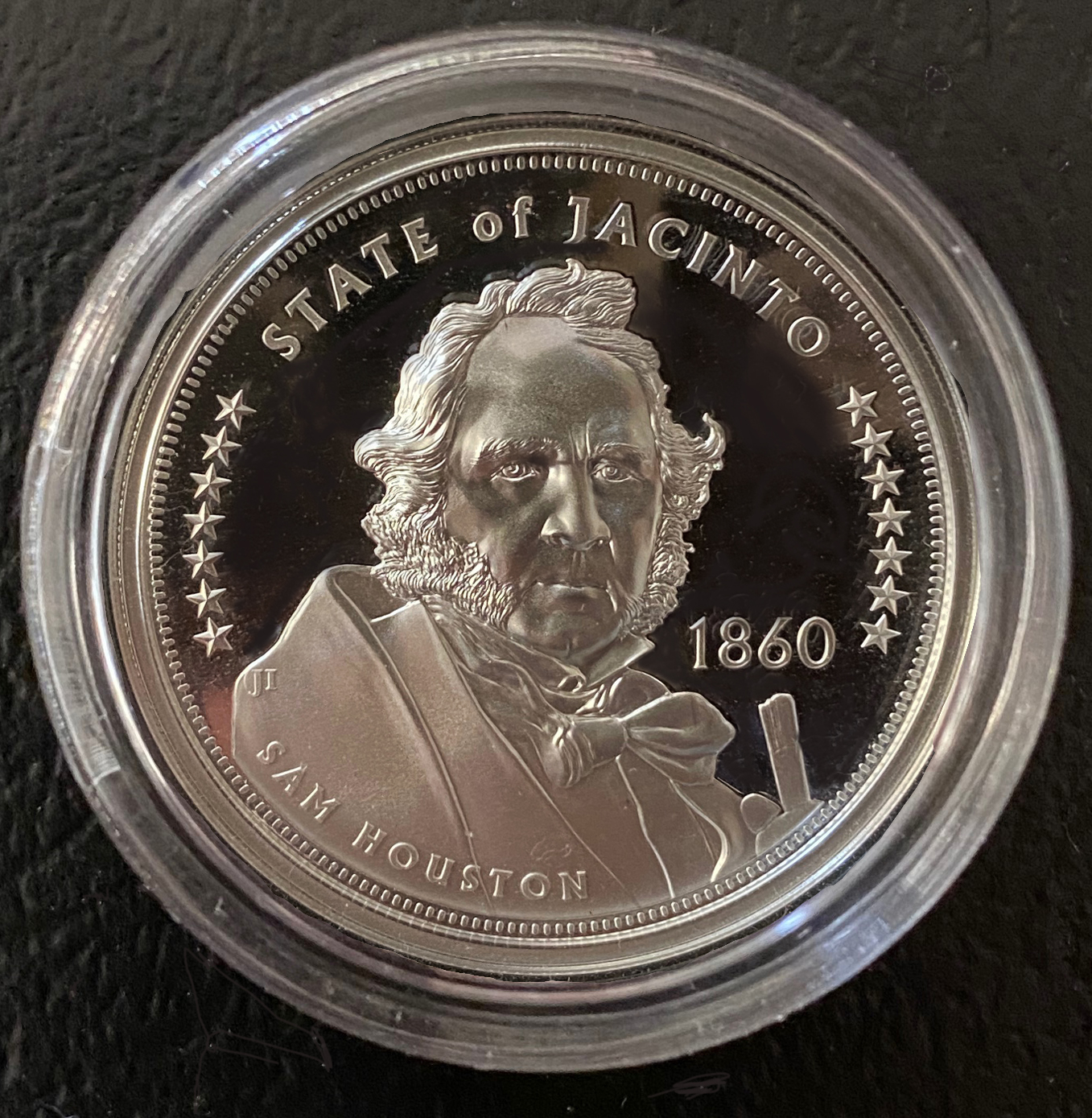 It was named for the Battle of Jacinto in April 1836 when General Samuel Houston and his army of 800 Texans defeated the army of 1,500 Mexican troops led by General Antonio Lopez de Santa Anna — a very brief (18 minute) but decisive battle for the control of Texas that is commemorated with a San Jacinto monument in Harris County, Texas — a very tall column in the Houston Ship Channel. Many ships have also been named for San Jacinto

Interview With the Artist

Louis Golino: “Do you have a list of the remaining 16 lost states to be featured on the coins issued in the next four years?”

Joel Iskowitz: “Actually, most of the remaining Lost States to be included in this collection have yet to be determined. The group in strong contention to be selected for the next four are the State of Jefferson, the State of Arcadia, the State of New Sweden, and the State of Hazzard.”

“Besides looking forward to portraying figures such as Thomas Jefferson on coinage, I am very excited that the State of Puerto Rico and the State of Potomac (DC) are now in the running to be included in this coin series as well as actually lobbying, again in real-time, with proposals for Statehood.”

LG: “Am I correct that the coins will be issued as both quarters and as $1 high-relief silver Proofs and both sets are issued for the Cook Islands?

LG: “Can you tell me about the Native American chief on the McDonald coin?  Is he a composite figure, or a real person?”

JI: “This question highlights one of the most interesting and compelling aspects of researching and trying to relate the history of each Lost State.”

“The short answer is yes, there was a real person, a Cherokee Chief, Henry Suagee, who played an important role the robust competition for territory and new boundaries in McDonald County, but because of concerns representing an actual individual, Chang Bullock, who envisioned the Lost States Coin Series, asked me to create my own unique vision of a Native American chief, which would both honor the history McDonald directly and Chief Suagee indirectly, with my composite image.”

LG: “Do you have any details on the motifs used for the reverse designs such as whether they are set in a particular park?”

“The reverse for the State of Jacinto depicts the scene of that famous battle that led directly to American rule of California, Arizona, New Mexico, Utah, and Nevada. Sam Houston (depicted on the coin’s obverse) was responsible for not allowing these lands to belong to Mexico.”

“With so many gorgeous scenic options to choose from the Deseret (later day Utah) landscape, I opted to utilize a portion of the Great Salt Lake and of course, there had to be an image of bees busy in their hive.”

LG: “What did it mean to you personally to work on this project, and how does it fit in with your artistic philosophy?”

JI: “When Chang Bullock, Vice President of Coin Invest Trust and the “Founding Father” of the Lost States coin program asked me to be the designer, I must admit, in all honesty, that I had never heard of “Lost States” or any of the many statehood proposals that never came to pass.”

“Once I began the research, which began with Michael J. Trinklein’s light-hearted but illuminating book, I became completely absorbed by the fascinating, sometimes surprisingly curious and quirky twists and turns in these narratives. As I dove deeper and deeper into these forgotten histories, it occurred to me that even though many of these proposals never had a chance of becoming part of the Union, a good number of them came within very few votes of gaining statehood. Being a lifelong New York Giants fan prepared me well to be inclined to take up the cause of the underdog, the underestimated, and the ignored, who might justly deserve some recognition.”

“In a very personal way, even though I have been very fortunate to have a great deal of my artwork published and minted, the reality is that more of my offerings have not been approved than have gained official acceptance. So, I can identify with these candidates and I feel fortunate to bring forth the true history of their attempts to be recognized.”

“As a narrative artist, I take pleasure and pride in trying to bring events and those who have shaped them to life with images. This project seemed to be a perfect addition to my other on-going projects, ICONS OF INSPIRATION and GODDESSES WITHOUT BORDERS, which attempt to illuminate what is compelling in our collective human tapestry.”

“With colorful names like Texlahoma, Sequoyah, and Transylvania, as well as actual and recent proposals for statehood from Albania, Cuba Puerto Rico, and the Philippines, I relish bringing these colorful tales to light.”