The 1936 Long Island Tercentenary Commemorative Half Dollar is one of several classic commemoratives that celebrated an early American event by a European population. In this case, it is the 300th anniversary of the first European settlement on Long Island, New York. In 1636 Dutch settlers founded the town of Breuckelen, named after a likewise named town in the Netherlands. Americans might be more familiar with the Anglicized named of the town: Brooklyn, now one of five boroughs of the city of New York. The first settlers were employees of the Dutch West India Company and over the two decades six more Dutch towns would be founded on Long Island. Even though these towns were overshadowed by the more important settlement on the island of Manhattan, New Amsterdam (which would become New York City) Brooklyn and the surrounding area played an important role in early American history.

Before the Dutch settled in the region (and before the English took over, eventually building one of the most famous metropolitan areas in the world) it was inhabited by the Lenape. The Algonquin peoples, of which the Lenape are considered to be part of, were among the most widespread language group on North-America at the time, dispersed throughout modern-day Canada and the northern United States, as far west as the Rocky Mountains. In the 16th century the Lenape and other Algonquin peoples were among the first Native Americans to come in contact with Europeans. Their history is one of struggle, which continues to this day, as is the case with many other Native American tribes.

Congress authorized the issuance of a commemorative half dollar celebrating the 300th anniversary of Breuckelen with the Act of April 13, 1936. A minimum of 5,000 coins were to be minted, with a maximum set at 100,000 coins. All were to be minted at a single mint (this would be the Philadelphia Mint, which struck most of the commemoratives) and all coins had to be dated 1936. This prevented the mintage limit from being divided over issues with several dates or from different mints, something that had resulted in the abuse of the commemorative coin program and the ultimate demise of the classic commemorative series. 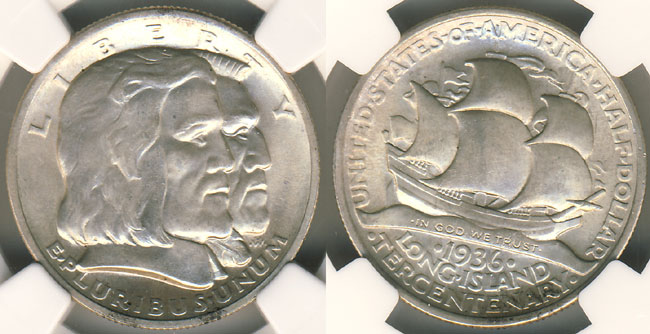 Howard Kenneth Weinman (who resided on Long Island) designed the Long Island Half Dollar. Most coin collectors will be familiar with his name, as he was the son of Adolph Weinman, who had designed both the Mercury Dime and Walking Liberty Half Dollar and was considered to be one of the most talented coin designers in the nation. On the obverse we see the portraits of an unnamed Dutch settler and a member of the Algonquin nation. Both face right. The word LIBERTY is above the busts and E PLURIBUS UNUM is below. Even though this side does not carry the issuing nation, year of issue or denomination it is generally considered to be the obverse.

The reverse features a Dutch ship, similar to Henry Hudson’s ship the Halve Maen (Half Moon) that appeared on the Hudson Half Dollar the previous year, with a few small differences, and overall a more stylized image. The ship appears to be riding the waves, and in the waves we see IN GOD WE TRUST. Below the ship is ·1936· and LONG·ISLAND / TERCENTENARY. Along the top portion of the design is UNITED·STATES·OF·AMERICA·HALF·DOLLAR. 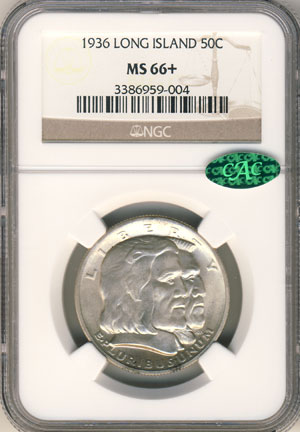 The Long Island Tercentenary Committee, who was also responsible for distribution, issued the coins. The Philadelphia Mint struck 100,053 Long Island commemorative half dollars in August of 1936 (the odd number includes 53 coins held for assay purposes) and delivered them to the National City Bank in Brooklyn. The committee went to great lengths to assure the availability of the coins for the general public, who could purchase them for $1 each. 50,000 were offered for sale at the office of the Brooklyn Eagle, 25,000 in the borough of Queens, 15,000 in Nassau County and 10,000 in Suffolk County. Sales were strong for the period, but 18,227 coins would eventually be returned to the Philadelphia Mint and melted, leaving a net mintage of 81,826 coins.

Even though a portion of the mintage was later melted distribution of this issue was quite good, and it is now considered to be among the more common classic commemoratives. Gems (graded MS-65) are easily acquired, although this issue is surprisingly difficult to find in higher grades. Besides a very limited number of MS-68s that have been graded most collectors will have to settle for pieces graded MS-67, and even at that grade level this coin is not all that frequently encountered. The reason for this is that the surfaces (especially on the reverse) are relatively flat, which makes the ships sail prone for bagmarks. A coin with no marks on the sails is a true rarity and very difficult to acquire. Most high-grade pieces come with varying degrees of toning and satin-like luster.