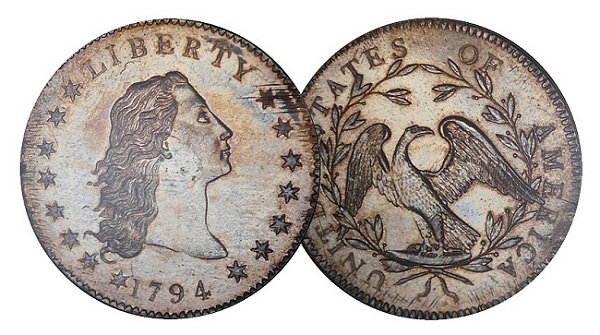 A 1794 United States Flowing Hair silver dollar that realized an astonishing 10 million dollars at auction in 2013 finally made its way to an awaiting public and media in London. The exceptional coin had been on a whirlwind tour of eight European cities that began on February 9 and concluded in London after visiting Prague, Estonia’s capital city of Tallinn, Oslo, and Dublin, among others.

A preview of this museum-quality piece was organized for media on Thursday, March 17, just before the dollar went on display for three days at the Royal Opera Arcade. The coin is thought to be the actual first dollar coin struck by the fledgling United States Mint in 1794; it has been graded SP-66 by PCGS and is now considered the world’s most valuable coin.

For the exhibition, the piece was encased in bullet-proof glass and given pride of place in the venue, just a stone’s throw from Trafalgar Square. Along with the Flowing Hair dollar, the display heralded a complete collection of American circulation silver dollars, with half dollars, quarter dollars, a comprehensive collection of Gold Double Eagles — including a high relief 1907 St. Gaudens — and one dollar gold coins. 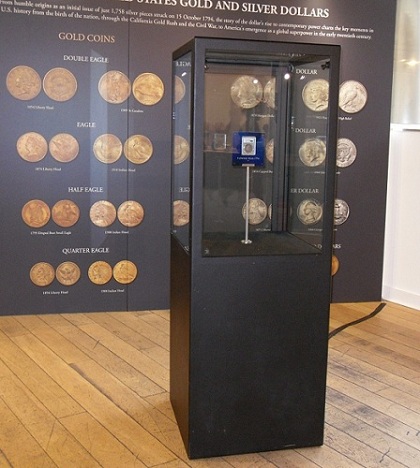 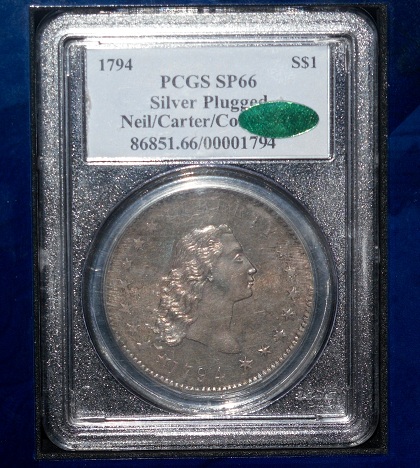 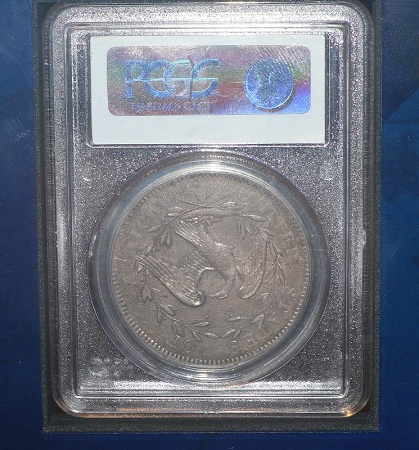 For history buffs, an actual copy of the American Declaration of Independence was included in the exhibition, just to the left of the Flowing hair dollar. The copy is believed to be a locally re-printed newspaper version of the hallowed original, written by the man who would eventually become America’s third President, Thomas Jefferson. 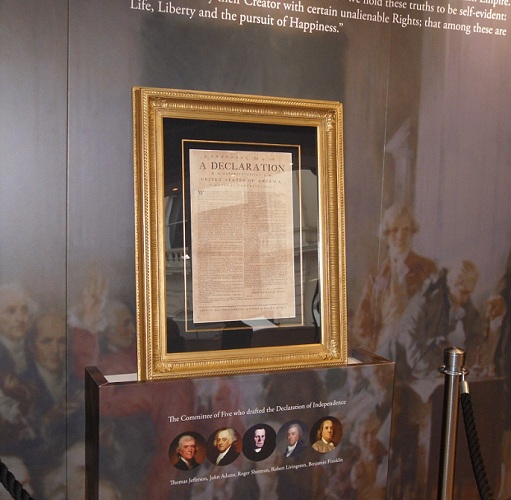 The July 1776 Boston broadside copy on display was originally printed to announce and inform the local citizens of the decision by the continental congress to declare America’s independence from Great Britain, and has an estimated value of four million dollars.

The tour and display were sponsored by the London Mint Office, a subsidiary of Sammlerhuset Group B.V., whose head office is located in Almere, Netherlands. The tour concluded on Sunday, March 20. For additional information on this and other promotional tours organized by Sammlerhuset B.V. please visit their Web site.

Background of the 1794 “Flowing Hair” dollar:

Approved by George Washington himself, it was recorded that all of the first 1794-dated silver dollars of the United States were struck within one day, on October 15, 1794. On that day a total of just 1,758 silver dollars were minted. They were all struck on a hand-turned screw press at the Philadelphia Mint. These seminal silver coins were graced by the figure of Liberty, adorned with flowing hair, and surrounded by fifteen stars — representing the fifteen states of the United States of America at the time. 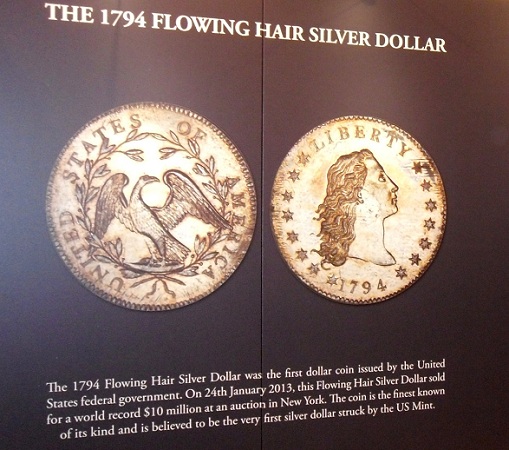 The obverse included an impression of Lady Liberty, representing the principles upon which the new nation was founded, and was a design that was specified by the law. The reverse featured an eagle encircled by a wreath, and the legend UNITED STATES OF AMERICA. The written-out denomination was placed on the edge: HUNDRED CENTS ONE DOLLAR OR UNIT. The unique quality of this particular 1794 dollar suggests that it was the very first to be struck, meaning that the dies that were used to strike the coin were in mint condition.

Robert Scot, engraver for the United States Mint from 1793, created the design for the first silver dollar, known as the ‘Flowing Hair’ obverse, which was used from 1794 to 1795. The design was modeled upon a French medal, created by the French engraver Augustin Dupre in 1782. Established by the Coinage Act of 1792, the Philadelphia Mint was the first mint to be opened in the United States in what was the nation’s capital at the time. The Philadelphia Mint still produces both circulation and commemorative coins in a modern state of the art facility.