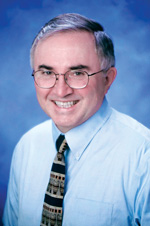 Littleton Coin Company President David Sundman won the Raymond S. Burton Business Leader of the Year award last week at the Annual Littleton Economic Celebration in Littleton, New Hampshire. He was honored for his contributions to the life and welfare of Littleton through community engagement and charitable contributions, including his work with the Northern N.H. Charitable Fund, which he helped create.

Former Business Leader of the Year winner David Ernsberger said by way of an introduction, “Our hospital, our industrial park, our schools, and their graduates, and our many non-profit endeavors in the area are all heavily supported by Dave Sundman and the community service culture of the employees of his company.” He added, “David Sundman has been a role model as a business executive and a caring citizen.”

Sundman gave credit to his 320 local employees, acknowledging their commitment to staying educated and informed on issues relating to numismatics. He told Darin Wipperman of the Littleton Courier, “We have a great team.” Of his continuing fascination with coin collecting, he said “It’s really a time machine…We sell history you can hold in your hand.”