The Bank of Lithuania have issued a new gold coin which focuses on Baltic Science – their contributors and its achievements. This coin highlights the studies of the region, its language and culture. In issuing coins from this series, the fields of science are discussed by the Bank of Lithuania with the Lithuanian Academy of Sciences in order to determine the subjects covered and design featured on the coins. From the 1960’s, Vilnius University has been famous as a global center of Baltic Studies. In 1965 it began issuing the journal Baltistica and organized a congress of Baltic Studies researchers and other international conferences. Currently, around the world (mostly in Europe) there are over 30 centers of Baltic Studies, where Baltic languages and culture are studied and/or are taught by people who are interested in this historical part of the continent. 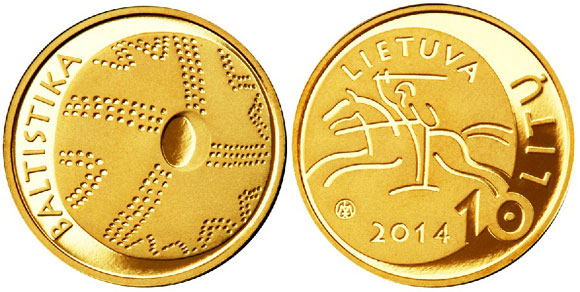 The coin is designed by the artist Vaidotas Skolevičiusand produced by the Lithuanian Mint in Vilnius. The obverse depicts the relic of an amber disc – a thick, irregularly-shaped archaeological find, reminiscent of a button, from the Neolithic period and assigned to the culture of the Balts. Around the shape is the text “BALTISTIKA”. The reverse depicts the country’s national insignia, that of the the Vytis, the figure from the Lithuanian coat of arms in a stylized form which is surrounded by the inscriptions “LIETUVA 2014 10 LITŲ” (Lithuania 2014 10 Litas)

The new gold coin was unveiled to the public at Vilnius University, in the Aisčių menė or, “Hall of the Aesti” where Marius Jurgilas, Member of the Board of the Bank of Lithuania, presented the coin to its designer, artist Vaidotas Skolevičius during the unveiling. This is the second coin of the series “Lithuanian Science”. The first was issued in 2012 and was dedicated to Lithuania’s achievements in cardiac surgery. The third coin of the series, dedicated to physics, will be issued in several years. The coin dedicated to Baltic Studies is the 86th collectors (commemorative) coin issued by the Bank of Lithuania since its re-establishment in 1990 and is also the 12th gold coin.

For more information on this and other coins offered by the Bank of Lithuania, please visit the website of the Mint of Lithuania at: http://kalykla.lt/en/monetos Information offered in English and Lithuanian – international orders dispatched.