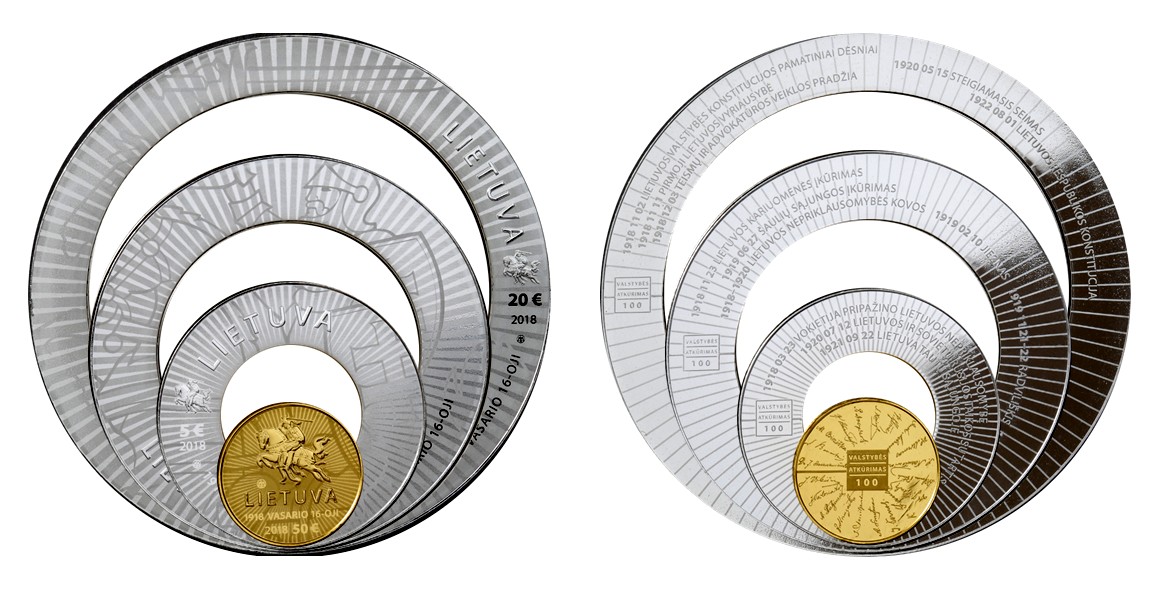 The Bank of Lithuania have released (16th February) new collector’s coins which are minted in celebration of the country’s centenary anniversary of its second proclamation of independence, declared on the 16th February 1918. In the midst of the Great War and the abdication of Russia’s last czar, Nicholas II, along with the emergence of the Bolsheviks in Russia, the council of Lithuania declared themselves independent of the remnants of the Russian Empire.

Initially, as Lithuanians were under Imperial German occupation as a result of the Great War, the council not only declared their independence but also declared that Lithuania would emerge from Russian association as a newly formed kingdom. On the 4th June 1918, the council chose to offer the throne to Prince Wilhelm of Urach, count of Württemberg (1864–1928), in the hopes that they would emerge as a separate state instead of the alternative — absorption into the Kingdom of Prussia. The duke of Urach accepted the offer, assumed the regnal name of Mindaugas II, and expected to take up his responsibilities as king of Lithuania with the conclusion of the war. He never assumed the crown, however, as German authorities declared the election invalid and after Imperial German forces were defeated by allied forces the invitation was withdrawn by Lithuania’s council on the 2nd November 1918.

Lithuania would emerge as an independent republic after further fighting against Bolshevik forces. The fighting would last from June 1919 until November 1920, which saw battles against Bolsheviks, Russian factions, and Polish for control of the capital of Vilnius, and Lithuania’s second city, Kaunas. The wars delayed international recognition of an independent Lithuania and the formation of civil institutions.

The coin, unique in its design and significance, is produced at the Mint of Lithuania and is designed by Liudas Parulskis. Consisting of four coins and when placed together, it makes for a unique souvenir of the centenary anniversary. Each coin has its own face value and is specially minted so that when the four come together, they form one greater coin, with the gold coin in the centre. The design of the gold coin depicts the facsimile signatures of the 20 original signatories to the Act of Independence of Lithuania.

Five-euro: The first silver ring is dedicated to diplomacy. The reverse side of the coin carries three dates in remembrance of the efforts to achieve independence not forcefully but through diplomatic, political, and legal actions.

10-euro: The second silver ring is dedicated to the armed forces and militarised organisations which defended and fought for Lithuanian independence. It perpetuates the establishment of the Lithuanian army and the Lithuanian Riflemen’s Union, as well as the battles that led to independence.

20-euro: The outer silver coin is dedicated to the legal system and rule of law, which features the adoption of the constitution of the Republic of Lithuania, the beginning of the activities of courts, the Lithuanian Bar Association, the dates of the establishment of the first government, and the Constituent Seimas (unicameral parliament) of Lithuania.

50-euro: The centre coin is dedicated to the 20 signatories of Lithuania’s independence declaration. The document stands as the legal basis for the existence of modern Lithuania. This act formulated the basic constitutional principles that were, and still are, followed by all constitutions introduced in Lithuania.

Each piece of this four-piece coin set is available either as a separate purchase or as the complete set. Alternatively, the coin is available as a complete set of four coins. Each piece, if purchased separately, is encapsulated and presented in a custom case along with a certificate of authenticity. The four coin piece is also presented in a custom case and displayed as one greater coin. For additional information on these and other coins issued by the Bank of Lithuania, please visit the website of the Mint of Lithuania.