On June 3, 2011, H.R. 2139 was introduced in the House of Representatives by Rep. Peter Roskam. The bill seeks to authorize the production of commemorative silver dollars to mark the centennial of the Lions Clubs International, which will occur in 2017.

The Lions Clubs International was founded in 1917 by Melvin Jones. The organization aims to “meet the needs of local communities and the world.” According to their website, there are 1.35 million members across 206 countries and geographic areas. 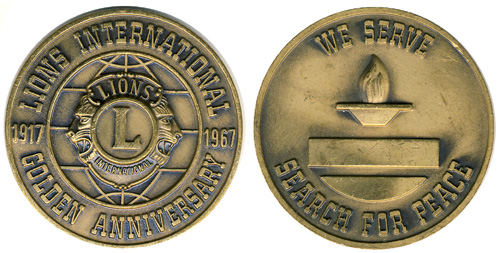 Under the Act titled “Lions Clubs International Century of Service Commemorative Coin Act”, the coins would have a composition of 90% silver and 10% copper, weight of 26.73 grams, and diameter of 1.5 inches. These are the standard specifications that have been used for other modern commemorative silver dollars. The maximum mintage for the issue would be 400,000 pieces, which may be issued during the calendar year beginning on January 1, 2017.

Designs for the coins would be emblematic of the centennial and selected by the Secretary of the Treasury following consultation with Lions Clubs International Special Centennial Planning Committee, the Commission of Fine Arts, and review by the Citizens Coinage Advisory Committee. Both proof and uncirculated qualities of the coins would be issued, with only one US Mint facility used to strike each version.

(1) furthering its programs for the blind and visually impaired in the United States and abroad;

(2) investing in adaptive technologies for the disabled; and

(3) investing in youth and those affected by a major disaster.

In order to become law, the bill H.R. 2139 must be passed in the House of Representatives and the Senate, and then signed into law by the President. Currently, the bill has 38 cosponsors.

Under current law, only two commemorative coin programs may be approved for each year. To date, no programs have been approved for 2017, although a separate bill introduced earlier this year seeks Ronald Reagan Commemorative Coins.