The Treasury of the Falkland Islands Government have announced (16th January) the launch of their first collector coin for 2012, which features the Life Cycle of the Butterfly. Struck by the Pobjoy Mint in the United Kingdom, this coin is the fifth in the Silver & Crystal coin series first issued in 2007 featuring the life cycle of various species in the animal kingdom from their inception to fully grown adulthood. 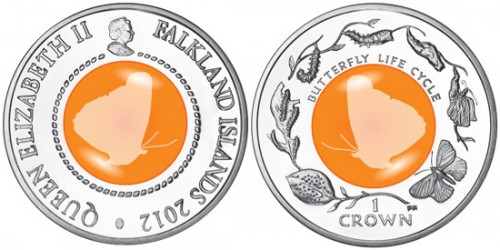 The outer silver ring of this innovative coin depicts the incredible journey of the Butterfly from egg to mature adult and in the center is a beautifully polished orange crystal upon which is the etched image of the Southern Painted Lady Butterfly appears. A butterfly starts life as a very small egg which is usually laid on the leaves of plants.  The second stage is the Larva or Caterpillar stage, a stage which does not usually last long and during which time the caterpillar spends most of its time eating.  The next stage is the Pupa or Chrysallis stage and inside this chrysalis the caterpillar is undergoing an amazing transformation.  Finally, when the caterpillar has fully changed, it emerges from the chrysalis as an adult butterfly. All of the stages described are intricately detailed in their order on the outer ring, while the image of the adult butterfly is carefully etched on the orange-colored crystal transparent center.

The obverse of the coin includes a cameo portrait of H.M. Queen Elizabeth II placed above the crystal along with the text “QUEEN ELIZABETH II FALKLAND ISLANDS” placed around the outer rim.

Struck in sterling silver to proof quality, the coin has a diameter of 38.6 mm and a weight of 23.4 grams. A limited quantity of 5,000 pieces is authorized for distribution. The series has been issued from several different countries and territories including the South Sandwich Islands and the British Indian Ocean Territory.

For more information on this coin, the entire series, and other coins offered by the Pobjoy Mint, please visit their website at: http://www.pobjoy.com/ukworld/page.php?xPage=index.html