The bill H.R. 6162 introduced on September 22, 2010 by Rep. Melvin Watt would provide the US Mint with the authority needed to strike Proof Silver Eagles, even if full demand for the bullion version of the coin remained unmet. 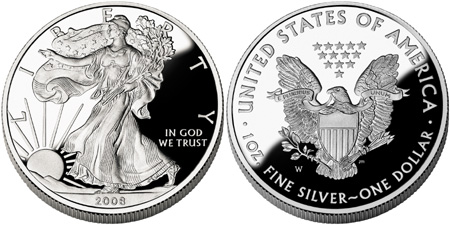 The United States Mint is currently required to produce American Silver Eagle and American Gold Eagle bullion coins in quantities sufficient to meet public demand. There is no current legal requirement to produce proof or uncirculated versions of the coins for collectors. At times when demand for bullion coins has exceeded available precious metals blanks supplies, the US Mint has allocated all available blanks to the production of bullion coins.

Within testimony delivered during a House subcommittee meeting held on July 20, 2010, United States Mint Director Edmund Moy mentioned potential legislation that would allow the striking of collectible versions of the Silver Eagle this year. The bill H.R. 6162 Coin Modernization, Oversight, and Continuity Act of 2010 seems to accomplish this.

Section 5112(e) of title 31, United States Code would be amended by replacing the word “quantities” with “qualities and quantities that the Secretary determines are”. Following amendment the law would read:

Notwithstanding any other provision of law, the Secretary shall mint and issue, in qualities and quantities that the Secretary determines are sufficient to meet public demand–

At the House subcommittee meeting, Director Moy mentioned that any change in law “needs to be enacted soon”. He provided a time table for production beginning in September with 200,000 coins struck per month. This would result in an estimated 830,000 of the 2010 Proof Silver Eagles produced before year end. The introduction of the bill on September 22 already puts the Mint behind schedule.

In the meantime, demand for Silver Eagle bullion coins has abated to the point that previous rationing programs have been lifted. Under existing law, the US Mint could produce Proof Silver Eagles with the excess of precious metals blanks not currently needed to satisfy bullion demand.

Collectors will remain on the edge of their seats to see if the possible passage of H.R. 6162 or continued slack in bullion demand allow the production of  2010 Proof Silver Eagles before the end of the year.