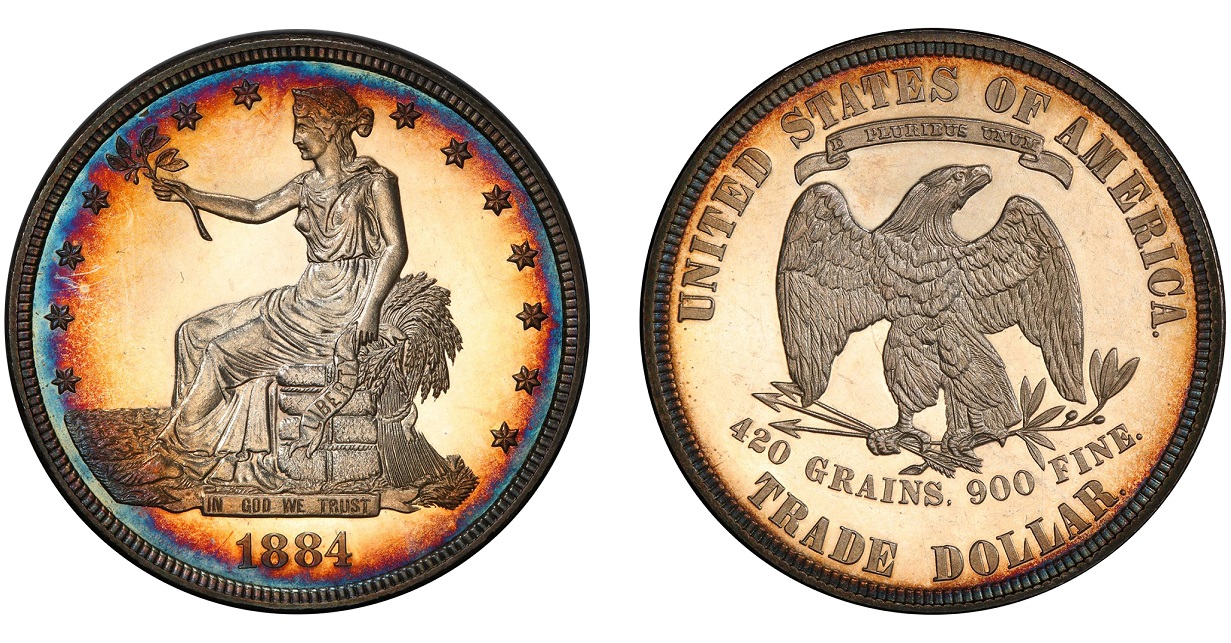 To be on display at the 2020 FUN Convention in Orlando, Florida

Santa Ana, CA (January 10, 2020) — Stack’s Bowers Galleries is proud to continue its tradition of presenting world-class rarities at auction by featuring 1884 and 1885 Proof Trade dollars in their March 18-20, 2020 Baltimore Auction.

The 1884 and 1885 Trade dollars are legendary U.S. Mint rarities, ranking #78 and #15 respectively among the 100 Greatest U.S. Coins (Garrett & Guth, 2019). While the Mint had ended production of circulation-strike trade dollars in 1878, Proof examples were officially distributed in Proof sets through 1883. Additional Proof examples were struck at the beginning of 1884, but were never distributed and all but 10 were eventually melted. It is believed that a similar situation occurred in 1885, leaving just five examples of that date for collectors today.

With such small populations, the rarity of these Trade dollars rivals or surpasses such numismatic icons as the 1913 Liberty Head nickel (five examples known) and the 1804 dollar (15 examples known). They are more infrequently offered at auction than these similar, but perhaps more famous issues. Every appearance is a historic opportunity.

Acquiring one of these Trade dollars represents a monumental numismatic prize; the inclusion of both has been a hallmark of only the most fabled and accomplished United States coin collections. It has been 17 years since Stack’s Bowers Galleries last offered both dates in the same sale, their May 2003 presentation of the L.K. Rudolph Collection. Prior to that, six years had passed since the April 1997 sale of the Eliasberg specimens, and over a decade since the L.R. French (1989), Norweb (1988), and Amon Carter (1984) examples were offered in its sale rooms. The pair of rarities to be presented in the March 2020 Baltimore sale have not appeared at auction in over three decades.

“Stack’s Bowers Galleries is the only numismatic firm to have handled every known 1884 and 1885 Trade dollar,” stated Stack’s Bowers President Brian Kendrella. “In fact, we have sold some of them several times over our 85-year history.” 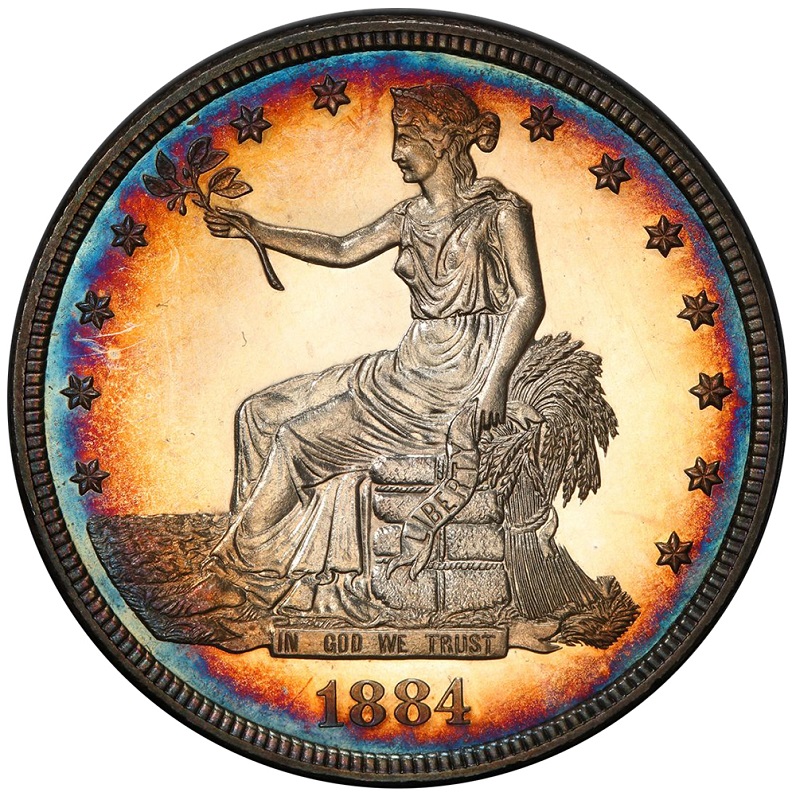 At Proof-64+ Cameo (PCGS), the 1884 ranks as the fourth finest certified of the 10 known examples. It first appeared on the market in an ad placed by dealer Edgar Adams in the March 1915 issue of The Numismatist. It has since resided in several significant cabinets, including those of Waldo C. Newcomer, Colonel E.H.R. Green and Amon G. Carter, Jr. It last was offered at auction as lot 440 in Stack’s January 1984 sale of the Carter Family Collection. 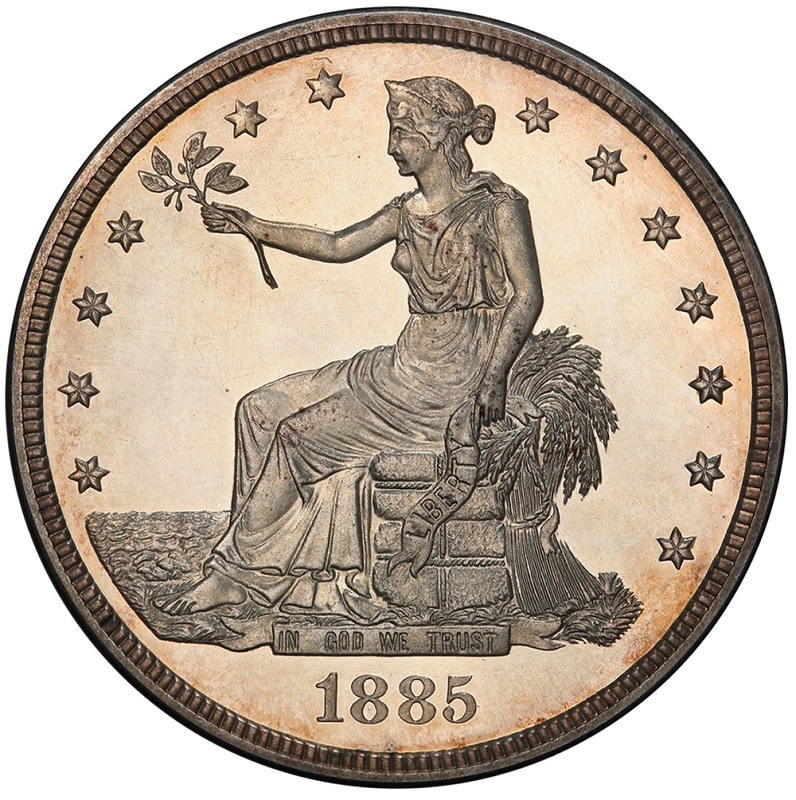 The 1885 example is certified Proof-64 (PCGS) and ranks as the second finest certified behind only the Eliasberg specimen (Proof-65+ Cameo PCGS). It was first offered at auction in B. Max Mehl’s sale of the Fred Olsen Collection in November 1944 amidst the chaos of World War II. Two decades later it appeared in Stack’s November 1965 sale of the George Ewalt Collection. It most recently appeared at auction as lot 202 in Stack’s sale of the L.R. French Collection in January 1989.

These two Trade dollars will be offered in Stack’s Bowers Galleries March 2020 presentation of further items from the E. Horatio Morgan Collection, an incredible cabinet of rarities assembled primarily in the late 1980s and early 1990s. The March Baltimore sale marks the third offering from this exceptional collection, with earlier selections featured in the firm’s August 2019 ANA and November 2019 Baltimore auctions. Built with a focus on dimes, half dollars, and select major rarities, highlights from the collection included a Choice Proof 1894-S dime, a Gem 1876-CC 20-cent piece, a Choice Proof 1838-O half dollar, and a nearly-complete set of half dollars by die variety from 1794 through 1836. With the inclusion of these two monumental Trade dollars, the E. Horatio Morgan Collection has surely secured a place among the most storied collections of United States numismatics.