The Legacies of Freedom Set is an intriguing United States Mint product originally issued in 2004. It brought together an American Silver Eagle bullion coin from the US Mint and a Silver Britannia bullion coin produced by the British Royal Mint.

The product was created as part of the US Mint’s efforts to expand numismatic program revenue by targeting new market niches. This product involved working with another nation to create a limited edition product. 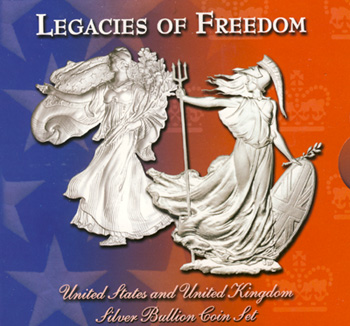 US Mint Director Henrietta Holsman Fore said, “Walking Liberty and Standing Britannia are beautiful, evocative images in defense of freedom. These allegorical women represent the strength and pride of their Nations.”

Each set included one 2003 American Silver Eagle bullion coin and one 2002 Silver Britannia bullion. The maximum product limit was 50,000 units, and the original pricing was $49.99 per set. At the time, the market price of silver was $6.39 per ounce.

The Silver Eagle is struck in .999 fine silver with a weight of one troy ounce. The obverse features Adolph A. Weinman’s Walking Liberty design that was originally used for the circulating half dollar from 1916 to 1947. Liberty strides confidently forward with her right hand extended and her left hand carrying branches of laurel and oak. The reverse design features a heraldic eagle with shield designed by John Mercanti. Thirteen stars are placed above to represent the original 13 colonies.

The Silver Britannia is struck in .958 fine “Britannia silver” to contain one troy ounce of silver. The obverse design features Ian Rank-Broadley’s portrait of Queen Elizabeth II. The reverse design for 2002 featured Philip Nathan’s Standing Britannia. She is dressed in a wind blown gown with a warrior’s helmet and holds a trident  in her right hand and a shield and sprig of olive in her left. 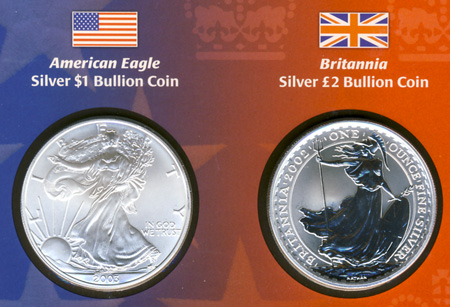 The final mintage for the 2003 Silver Eagle was 8,495,008, with the coins primarily distributed through bullion channels. The 2002 Silver Britannia had a maximum mintage of 100,000 coins.

For the Legacies of Freedom Set, the two silver coins were packaged together in an illustrated blister pack that allowed both sides of the coins to be viewed. The packaging also included the story of Walking Liberty, the story of Britannia, and information on the two sculptors behind the designs. A certificate of authenticity was signed by US Mint Director Henrietta Holsman Fore and Deputy Master and Chief Executive of the Royal Mint Gerald Sheehan.