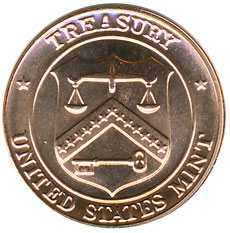 Acting Director of the United States Mint Dick Peterson announced a number of leadership changes at the Mint designed to make the organization more focused on its customers. The changes effective on January 2, 2013 are intended to apply resources most effectively and where they are needed most.

Within the announcement Peterson said, “From the avid coin collector, to the bullion investor, to the retailer who uses our circulating coins, to our Congressional Gold Medal and commemorative coin honorees, to our leadership at Treasury, to each other as fellow employees, and most fundamentally to the American taxpayers, the Mint needs to rededicate itself to customer service at all levels.”

B.B. Craig, currently the Associate Director of Sales and Marketing, will become executive lead for the Comprehensive Production Schedule and Plan Project. According to the announcement, “In this new role, B.B. will be responsible for creating a model master plan and calendar for the annual production and distribution of our circulating, numismatic and bullion products.”

As he continues his duties as plant manager in Philadelphia, Marc Landry will serve as the Acting Associate Director of Sales and Marketing. In his new role, “Marc will work closely with Tom Jurkowsky, our Director of Public Affairs, to review roles and responsibilities with the goal of establishing a marketing communications team reporting to Tom and an operations-focused team reporting to Marc. ”

Sherry Suggs, currently the Deputy Associate Director of Sales and Marketing, will launch a new effort to develop the United States Mint operations manual, creating standards for and consolidating our internal guidance and practices.

Mary Lhotsky will serve as the Acting Deputy Associate Director of Sales and Marketing.  “In this role, Mary will lead the Customer Voice initiative, working with SAM and other Mint employees to chart the optimal touch points with our various customer segments and create a comprehensive outreach and marketing communication plan. ”

Dave Croft will assume the role of Acting Associate Director of Manufacturing, in addition to continuing his duties as plant manager in Denver.

After serving as the Acting Chief Engraver for most of the last two years, Ron Harrigal will return to his position of record as Senior Advisor to the Associate Director of Manufacturing effective January 20, 2013. The US Mint plans to post the position of Lead Sculptor in the coming weeks.

In November, Peggy Yauss was selected to continue her role as Deputy Chief Financial Officer.