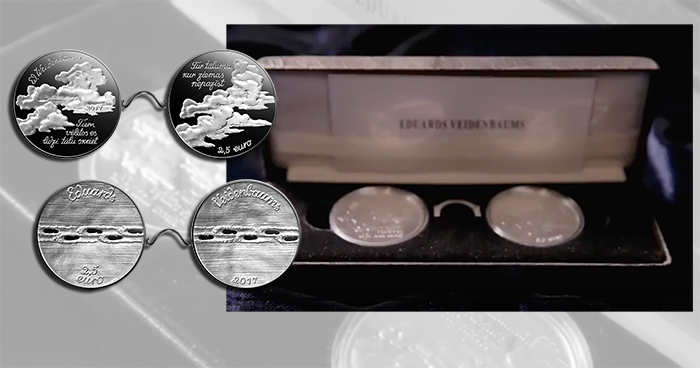 The Latvijas Bankas have issued (5th October) two distinct and creative silver coins to honour one of the country’s more memorable and admired poets on the 150th anniversary of his birth. Eduards Veidenbaums (1867–1892) holds a special place in the hearts of many Latvians, as the power of his talent — while unknown to a wider range of readers during his own lifetime — has been recognised over the years and now plays an important role in Latvian poetry. His literary works, created at the end of the 19th century, have remained surprisingly topical.

Veidenbaums was considered a trailblazer in Latvian literature. His style and reference cannot be found in the modest landscape of the Latvian verse of the period, but rather they derive from the peaks of world literature such as Horace, Schiller, and Heine. He was the first Latvian whose poetic ideas did not focus on belonging to a certain community and praising its importance, but rather on the confrontation between a sovereign, self-esteemed individual and reality. Viedenbaums was the first Latvian writer to perceive and convey deeply the issues of life, death, and meaning of life. He also boldly highlighted the social and ethical flaws that the literature of the period hardly touched upon, due to the potential repressions of the tsarist regime and assumptions of the general public. Even when addressing trivial issues, the poet’s vision remained sharp, as he possessed a fascinating sense of self-irony and sincerity. That is why his literary legacy can still touch our hearts. 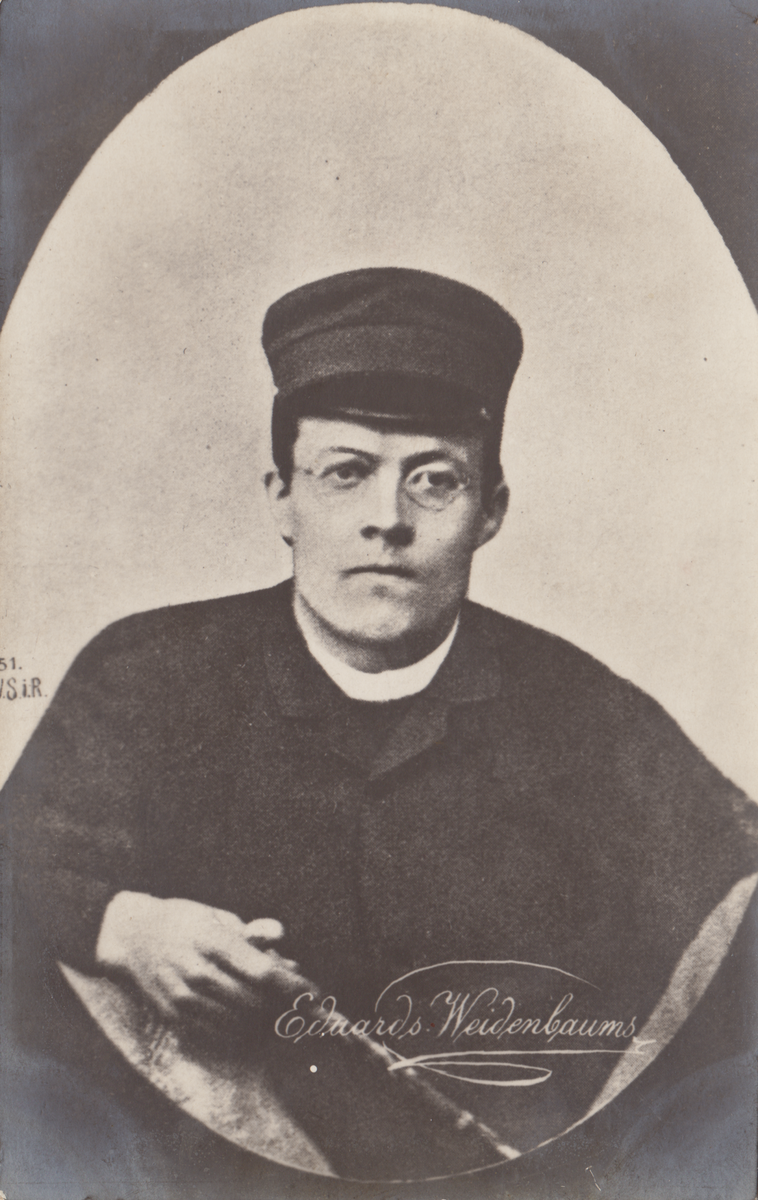 The only known photo of Latvian poet Eduards Veidenbaum. (Courtesy of the National Library of Latvia)

The two-coin set is produced by the Koninklijke Nederlandse Munt (Royal Dutch Mint). Both coins were created by artist Arvīds Priedīte and are cleverly designed to form a set of stylised spectacles. Spectacles are heavily associated with Eduards Veidenbaums, as many recognise them from the single authentic photo that has survived up to now. the two obverses displayed side by side contain a couplet from one of his poems; the two reverses display his first and last name.

First coin: The obverse features clouds, with the facsimile signature of Eduards Veidenbaums semi-circled around the top left. The cloud in the central part of the coin bears the inscription of the year 2017 on the right side. A line of Eduards Veidenbaums’s verse, Tiem vēlētos es līdzi tālu skriet (“I’d love to follow them far away”) is placed at the bottom of the coin.

The reverse includes the inscription Eduards semi-circled at the top; an inscription 2,5 euro is placed at the bottom. A horizontal trail of footprints in the snow crosses the reverse in the middle.

Second coin: The obverse features clouds, with a line of Eduards Veidenbaums’s verse Tur tālumā, kur ziemas nepazīst (“Far away where winter never comes”) placed at the top left; the inscription 2,5 euro is semi-circled around the bottom right.

The reverse includes the inscription Veidenbaums semi-circled around the top; the year 2017 is placed at the bottom. A horizontal trail of footprints in the snow crosses the reverse in the middle.

The edge of each coin includes the lettering LATVIJAS BANKA un LATVIJAS REPUBLIKA (Republic of Latvia), separated with dots on its edge.

This video, prepared by the Bank of Latvia, depicts the coins in their packaging, which is designed to look like an eyeglasses case:

The coins are encapsulated and presented in a spectacle-type of casing which resembles vintage style eyeglasses similar to those worn by the poet himself. From the 5th October, the coin set will be on sale at Latvijas Banka Cashier’s Offices (K. Valdemāra iela 1B in Riga and Teātra iela 3 in Liepāja). The set will also be available on the Bank’s website which offers a wide range of collector coins and other numismatic products issued by Latvijas Banka.

You flashed like a shooting star across the sky of art…

Those words were dedicated to the poet by his friend and fellow poet Edvards Treimanis-Zvārgulis (1866–1950). However, if we did compare Veidenbaums to a celestial body, he was more like a supernova, since we see the extreme brightness of its explosion only after the star itself is already gone. The power of the poet’s talent, unknown to a wider range of readers during his lifetime, has not subsided over the years. People know Veidenbaums’s poems by heart and quote them, composers use his lyrics for music in the 21st century. “Awaken thee, free spirit,” “The clouds pass by like white swans,” “My thoughts are deep,” and other lines of his verse are known not only by literary historians — they are still used in everyday communication.

Eduards Veidenbaums belonged to the first generation of Latvian intellectuals for whom academic education was no longer a unique and rare case, and Latvian peasants, having been freed from serfdom already for half a century, also tended to provide education to their children. However, at the time when Eduards Veidenbaums became a student of law at the University of Tartu (Dorpat), in Estonia, an economic crisis hit the Baltics. Even the well-tended and managed Kalāči, his family’s farmstead, could not provide the student a care-free life. He had to economize on both food and clothes. This, combined with the inevitable stress and strain, shattered the young man’s health. In the fatal December evening in 1891, when Eduards was on his way home from Tartu, the coat he was wearing was too thin and threadbare. Travelling from Cēsis to Kalāči for more than three hours, he caught a cold. It grew into tuberculous pneumonia, cutting his life short the following spring. Veidenbaums’s legacy, though tragically short, consisted of less than a hundred poems and included translated lyrics, several translations of short prose pieces, and four popular science articles on the history of law, electric lighting, the theory of mechanics, and economy. The diverse topics of the articles demonstrate his enviably broad range of interests.

Veidenbaums died on the 24th May 1892, aged just 24, in Liepas parish, Latvia, where he was laid to rest. Much of his work was published posthumously, and his reputation as a poet of great ability grew only over the years following his death. In 1958, a museum was dedicated to Veidenbaums in his hometown of Kalachi. The Eduard Veidenbaums Literary Prize was founded in 1968 as a tribute to his talent and influence in Latvian literary works.