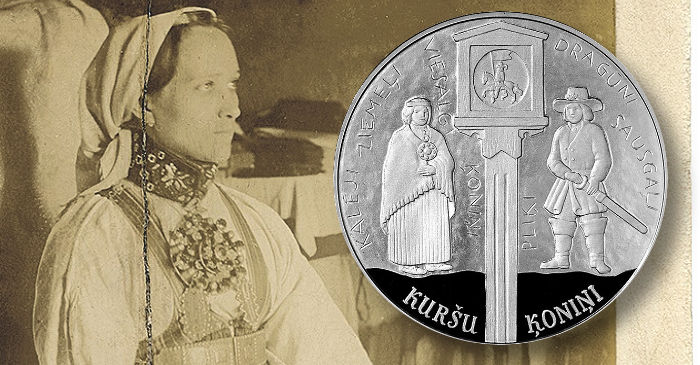 The Latvijas Bankas have issued (17th August) new collector coins which are dedicated to the era in Latvia’s history when the advancement of the Curonian Kings was predominant in the region. The subject also highlights a part of the earlier Latvian nation which managed to safeguard its personal freedom and independence for centuries. This group of people, united by a social tradition, was an essential part of a strong social structure. One of the aforementioned historically developed social groups was the Curonian Kings.

The history of the Curonian Kings is both epic and eventful in terms of shaping the modern nation of Latvia. They were the natives of Courland, one of the historical and cultural regions in western present-day Latvia living in seven free villages. It is unclear how the Curonian Kings gained their status, however, a popular assumption is that their ancestors were Curonian nobility prior to conquest by the Livonian Order. As vassals who were holders of land by feudal tenure on conditions of homage and allegiance, they received further lands and privileges from the Livonian Order, the autonomous branch of the Teutonic Order, which was formed in 1237.

Before this formation, an agreement concluded between King Lamekin (Lammekinus Rex), representing most of the Curonians, and an authorised representative of a legate of the Pope in Rome in 1230. It established that the Curonians, in order to secure their independent status, would take part in battles against pagans and would retain the right to be free as long as they remained Catholics. The agreement, however, was short-lived, as the religious powers and the influence of the Livonian Order tended to change, but the tradition of freedom was established and endured.

The collector coins entitled “Curonian Kings” were produced by the Mint of Lithuania at their facilities in Vilnius, on behalf of the Bank of Latvia, and were created by artists Arvīds Priedīte (the graphic design) and Ligita Franckeviča (the plaster model). The obverse features a design reminiscent of the early days of Baltic and Germanic style featuring a rider on a horse with a feather in his hat, a sword at his side, and a banner in his hand, against the background of a handwritten document complete with an official wax seal. The year of issue, 2018, and the inscription, 5 euro, are placed below the primary design and are arranged in a semi-circle to the left and right respectively.

The reverse depicts the Peniķi column with Ķoniņciems’ coat of arms that is featured vertically along the diameter of the coin. A woman dressed in the folk costume and a man with a sword are placed to the left and right, respectively, which are integrated into the primary design. In the background are the names of the seven free villages of Courland inscribed as: KALĒJI, ZIEMEĻI, VIESALGI, ĶONIŅI, PLIĶI, DRAGŪNI, and SAUSGAĻI. The lower part of the coin bears a semi-circled inscription KURŠU ĶONIŅI (Curonian Kings).

The coin is encapsulated and presented in a custom case, is accompanied by a certificate of authenticity, and is available online. A wide selection of collector coins and other numismatic products issued by Latvijas Banka are available, where orders can be placed by both individuals and businesses. For residents in Latvia, all purchased collector coins and numismatic products can be collected at Latvijas Banka Cashier’s Offices in Riga and Liepāja, in addition to using the delivery services of SJSC Latvijas Pasts. E-monetas.lv can also be used to purchase numismatic products by individuals and legal persons abroad. The products are currently delivered to 35 countries: Including most EU countries, the U.S., Canada, Australia, and New Zealand.