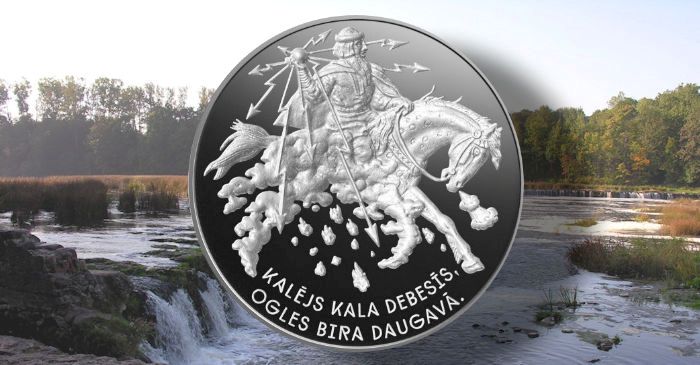 The Bank of Latvia have issued (2nd November) a new silver coin which is dedicated to Latvian folk songs, and features some lines from one of them, titled “Smith Forges in the Sky.” The Latvian name for folk songs, “dainas,” is borrowed from Lithuanian and has become a keyword for the folk song tradition and the accomplishments of Krišjānis Barons (1835–1923), as well as a symbol of the Latvian identity. The Cabinet of Folk Songs now forms a part of the Latvian folklore collection and is located at the Latvian National Library. On the flip side, mythical folk songs are still able to inspire and sometimes enable Latvians to look at the world with an almost child-like innocence, as there are good and bad days in life — just like in folk songs.

The drawings depict objects of nature and natural phenomena. As this is a very common motif in folk songs, this particular category of the genre takes up quite a lot of space in Krišjānis Barons Cabinet of Folk Songs, which has been featured on the list of Registered Heritage of UNESCO’s Memory of the World Programme since 2001.

The song tells the tale of a fierce rider who personifies the element of nature pouring down from the heavens — providing the nourishment required for fertility and prosperity. In the Latvian mythology, this heavenly smith is called “Thunder” or “Father Thunder,” and he has quite a big family including a mother, daughters, sons, and even a daughter-in-law. Many folk songs mention as many as nine sons of Thunder who also play the pipes and beat the drums. The daughters of Thunder create rain; his wife sifts the rain, but she too can also rumble. Father Thunder can be armed with a sword, a whip, an iron rod, a bolt, an arrow, and a fiery bludgeon. His counterparts in the mythology of other nations are Jupiter, the ancient Roman god, and the mighty Zeus of the ancient Greeks. Thunder was a very popular deity in the present-day territory of Latvia as suggested by, for example, an observation made by the Jesuits of Daugavpils in 1734 describing how mead, an alcoholic beverage created by fermenting honey with water, was brought to the middle of a field as an offering to the holy Thunder.

Smith forges in the sky,
The coals burst into the Daugava;
I spread my shawl on the ground
And collect a pile of silver.

The coin is struck by the Royal Dutch Mint on behalf of the Bank of Latvia and is designed by Edgars Folks (graphic design) and Ligita Franckeviča (plaster model). The obverse side features a horseman wearing an ethnic outfit at the centre of the coin. His right hand is raised and holding an orb shooting nine lightning bolts in various directions. Clouds and raindrops surround the horse. The inscription KALĒJS KALA DEBESĪS, OGLES BIRA DAUGAVĀ. (Smith forges in the sky, the coals burst into the Daugava.) is arranged in a semi-circle below.

The reverse side features on the upper part images of ethnic Latvian jewelry and raindrops (including a horseshoe fibula, which starred on an issue in the Latvian Gold Brooches series). The inscription 5 EURO and a shawl with a jeweled headpiece are featured in the bottom part, with the inscription of the year 2017 placed to the right. The words ES PAKLĀJU VILLAINĪTI, MAN PIEBIRA SUDRABIŅA. (I spread my shawl on the ground and collect a pile of silver.) is arranged in a semi-circle above the central motif. The coin’s edge is incused with the inscriptions LATVIJAS BANKA and LATVIJAS REPUBLIKA separated by rhombic dots.

From the 2nd November, the coin will be on sale at the Bank of Latvia’s Cashier’s Offices (K. Valdemāra iela 1B in Riga and Teātra iela 3 in Liepāja) as well as online via Latvijas Banka’s website, which offers a wide range of collector coins and other numismatic products issued by the Latvijas Banka. The coin will also be available at traditional points of sale, such as numismatic shops, bookstores, and souvenir and jewelry shops within Latvia. A list of locations is available here.