The Latvijas Bankas has issued the first collector coin in a special series of coins dedicated to the most loved and significant Latvian fairy tales. This particular coin honors a fairy tale about five cats that has served as a source of inspiration to many writers.

Latvians have always loved fairy tales with their messages encouraging the virtues of kindness and diligence. Evil is also present, yet good always wins. This tradition imparts folk wisdom, philosophy, and ethics, and the scenario is always played out with a piece of useful advice given as part of an emotional and moral education.

The Latvian children’s book writer Vilma Delle (1892-1980) turned this fairy tale into light verse. Her poem, “Five Cats,” was reminiscent of Kārlis Skalbe’s “Pussy’s Watermill” tale, and was first published in the youth magazine Jaunības Tekas in 1920. The re-written story of “Five Cats” by poet and artist Alberts Kronenbergs (1887-1958) was published in the children’s magazine Bērnība in 1949, and there the cats are shown as quarrelsome creatures that cannot come to any agreement about working together and getting needed firewood. The opening line of this well-known tale is:

“Five cats once had a thought:

A pot of porridge would be good.

We’ve got milk, a pot’s been brought –

Just have to cut some firewood.” 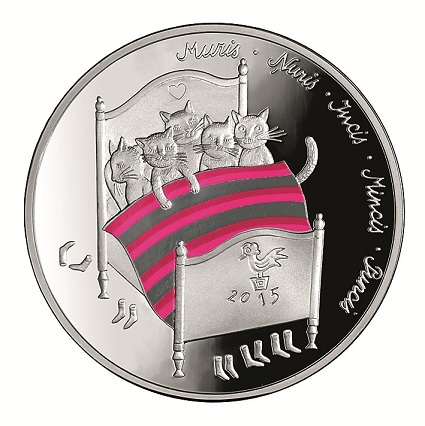 After all their trouble getting the firewood, they received their reward, for folk wisdom dictates that one’s well-being is based on using one’s smarts, resourcefulness, discipline, cooperation, and diligence:

“Presently they cooked their meal,

There was food enough for all:

They ate and ate with so much zeal 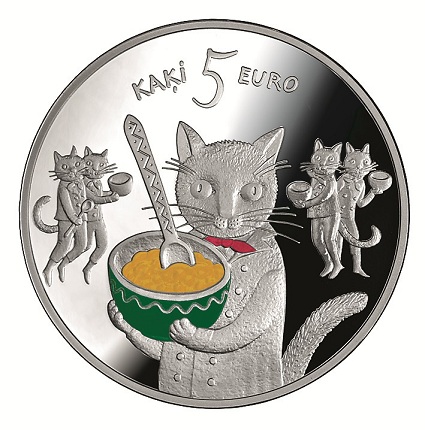 The coin, produced on behalf of the Bank of Latvia by the Mint of Lithuania, is designed by artist Anita Paegle. The obverse design includes a color and embossed depiction of a bed with five sleeping cats. The foot of the bed is decorated with an image and 2015, the year of issue. The names of five cats — Muris, Ņuris, Incis, Mincis and Puncis — are arranged in a semi-circle on the right in a stylized script.

The reverse design includes a cat holding a porridge bowl at its center. Cats with smaller bowls and spoons are featured on either side of this motif. The number 5 is placed at the top, with the words KAĶI (CATS) and EURO featured to the right and to the left of the number, respectively.  The smooth edge bears the inscriptions LATVIJAS BANKA and LATVIJAS REPUBLIKA, separated by dots.

This coin is now on sale at Latvijas Banka Cashier’s Offices (K. Valdemāra iela 1B in Riga and Teātra iela 3 in Liepāja), as well as at coin shops, bookshops, souvenir vendors, and jewelry shops. Future coins in the new series will be announced in 2016.