On September 13, the Bank of Latvia issued an unusual and appealing coin dedicated to the achievements of Latvian entrepreneurs, and honoring their endeavors and contributions to the country’s economic independence and national self-confidence. The coin also recognizes the 25th anniversary of the restoration of Latvia’s independence from the former Soviet Union. Since that time, national entrepreneurs have been diligently building an enterprising state and helping to boost hopes for a better future.

The obverse bears a QR code that, when scanned, reveals a message for the next generation of entrepreneurs: “Work With Courage, Determination and Responsibility!” To the left is the year of issue, 2016, and at the bottom, LATVIJA.

The reverse of the coin features 25 raised facets representing the past quarter-century of entrepreneurship. Near the top is the denomination, 5 EURO; running diagonally along the facets below are the words NACIONĀLAIS UZŅĒMĒJS.

Designed by Paulis Liepa, the decagonal (10-sided) coin is struck by UAB Lietuvos Monetų Kalykla (Mint of Lithuania) on behalf of the Bank of Latvia. The designer’s prior project for the Bank of Latvia was the design of the collector coin “365,” the very last collector coin denominated in lats (Latvia’s national currency before adopting the Euro). 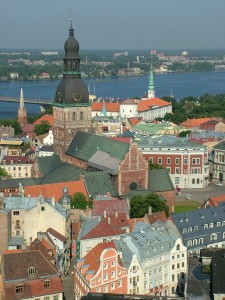 Riga, the capital of Latvia.

The coin went on sale at Latvijas Banka Cashier’s Offices (K. Valdemāra iela 1B in Riga and Teātra iela 3 in Liepāja) and was soon sold out. It is rumored that only a portion of the mintage of 3,000 coins was sold to the public, and that the rest were awarded to members of the Latvian entrepreneur community. (Note that this is unconfirmed as of this posting.)

Information about the many other innovative Latvian collector coins that are currently available can be found here.